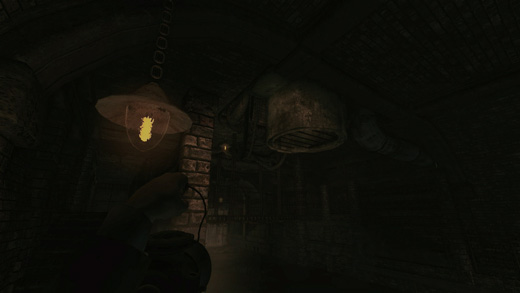 HIGH Climbing into the temple.

LOW Dealing with the electrified monsters near the end.

Oswald Mandus has built a grand machine. Beneath his expansive manor he has excavated space for miles of conveyor belts, screws, and steam pipes. Their ostensible purpose is to eviscerate and prepare pigs for common consumption. The factory's real purpose, however, is much more sinister. If only Mandus could remember anything about it.

Mandus awakens in his mansion and realizes his children have gone missing, even though he occasionally catches glimpses of them running down halls and hears them calling for him. Mandus has apparently never encountered any horror books, games, or movies, because he believes his children are alive, but Amnesia: A Machine for Pigs did not convince me of this for even a moment. When a voice on a telephone said that the children (whose specters I'd seen in the mansion) were trapped in the machine, I couldn't believe that Mandus believed it.

Mandus then ventures into the cavernous world of the machine, and as these things typically go, he must repair the work of a saboteur in order to reach its depths. The repair work is perfunctory—A Machine for Pigs lacks any sort of inventory system, so the necessary items are always close enough to be conveniently carried to where they're needed. Adventure game absurdity is not missed here, but if it wasn't going to be replaced with something worthwhile, I'd prefer to have nothing at all.

A few monsters block Mandus's efforts to toss lumps of coal into furnaces, turn valves, and carry gears three paces. These creatures are drawn by light and can kill an unaware player in a few hits. They're also trivially easy to elude except when they spawn in such a way as to be completely unavoidable. Otherwise, dodging them is as simple as turning off Mandus's lantern, which has no negative consequences—Mandus seems not to fear the darkness, and I certainly didn't. Given the game's weak visuals and heavy fog, I didn't even miss out on seeing much.

The absence of any trade-off for safety did the game's horror aspect no favors, and its general design defeats any sense of immediate danger. As another example, Machine has some creatures that can only be seen in water… but they stay in the water, so a little awareness means they're not frightening after the first encounter. Thanks to excellent sound design, the game's enemies can still evoke a few chills, but they were always scarier before I ran into them than after.

As Mandus goes deeper into the machine we learn more of its story and his. A Machine for Pigs uses all the traditional methods—audio logs, long-distance conversations, scraps of paper with diary entries on them—but errs by shoving Mandus's own thoughts into a diary page rather than having him express them audibly. In many of these materials the game rails against the iniquity of the decadent British Imperium and the horrors of the impending 20th century. Of course, it does not examine the hypocrisy of using its texts to criticize society for its cruel neglect of the poor while forcing the player to hate and fear (and in one instance, kill) the victims of gruesome experiments.

Oh, A Machine for Pigs has its moments. The mansion explored in the early game is deliciously creepy and delivers a few good jump scares. A late segment set on the streets of London is suitably horrific and includes the game's only effective enemy encounter. The idea of a malevolent machine that takes on a life of its own is compelling, and at times the game successfully evokes a feeling of dread—a sense that finding the answers to the game's mysteries might be worse than leaving it unfinished.

Alas, none of that pays off. The mansion is devoid of threat, and London nearly so. The machine is all talk, and Mandus's final moment of horror is blunted by the game's visual tics.

How much does that matter? Amnesia: A Machine for Pigs has striking ideas, and the speech of the era matches well with The Chinese Room's occasionally overwrought prose. If the game were just about navigating a disturbing machine while experiencing the words I might like it better. Encrufted as it is with uninteresting puzzles, murky visuals, and self-defeating enemy encounters, A Machine for Pigs's better ideas end up just as thoroughly buried as Mandus's diabolical factory. Rating: 6.0 out of 10.


Disclosures: This game was obtained via retail purchase and reviewed on a home-built Windows 7 PC equipped with an Intel i7 processor, 8 GB RAM, and a single Radeon 6800 HD-series graphics card. Approximately five hours of play was devoted to single-player mode and the game was completed.

Parents: As of press time this game has not been rated by the ESRB, but the answer here is nope. Amnesia: A Machine for Pigs contains blood and gore, intense violence, and sexual content. It is most definitively not for kids. I would rate it "M" or "AO."

Deaf & Hard of Hearing: All the dialogue is subtitled, but the game's horror depends tremendously on the sound design. Without being able to hear footsteps, the roar of the machinery, and the squealing of the pigs, hearing impaired players will be missing a lot of the game's impact.

Hi Larry, I should re-emphasize that this game, while bearing the Amnesia name, was only published by Frictional Games. The Chinese Room (Dear Esther) did the bulk of the development. Frictional have been working on a new game called Soma for 2015, which may be more up your alley.

The first Amnesia was a breath of fresh air but mainly because I was a guy who got into gaming with Resident Evil and Silent Hill. Those games used to actually be scary, but not today. So I was hoping Amnesia would be a franchise that would continue to scare me unlike its contemporaries. Unfortunately, Pigs is a stumble at best and a sign the developer has nothing left in the tank at worst.