Nuke It from Orbit 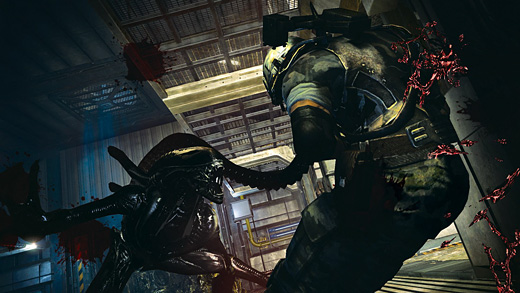 LOW The alien is crouched in front of me, ready to spr- no, wait, it's still crouching… still crouching while I shoot it… Now it's dead, and its buddy has come to crouch in its place.

WTF How did a major title get released in this state?

is a terrible game. It fails in every possible respect to live up to the film it's based on or the action games it apes, and it even fails the basic principles of reasonable construction. It is an insult to fans of the film series, a black mark on the careers of everyone involved in its production and sale, and it should not be played by anyone.

No matter what Games Workshop tells you, it was Aliens and not Warhammer 40,000 that entrenched the concept of the armored space marine in the popular imagination. True, in Aliens the marines get their asses handed to them, but they were sharply written and strongly characterized. In their journey from hubris to despair to grim determination, they are portrayed as believable human beings who are smart enough to realize they're screwed, and dumb enough to think they just might make it out alive anyway.

Aliens: Colonial Marines could have continued this intelligent characterization and used the fight against the Xenomorphs to examine our mixed national feelings about the asymmetries of the war on terror in the same way that Aliens reflected Vietnam. Instead it portrays the marines as pure meatheads, constantly shouting at each other about how they don't leave marines behind, and spewing military jargon the writers picked up from other, better-made games. Nobody pauses to ask how they got their asses so thoroughly kicked, or to absorb the disasters that have happened to them—Aliens: Colonial Marines's ceaseless bombast offers them no opportunity for self-examination. Where Aliens was a sly comment on America's failed wars, martial hubris, and military-industrial complex, Colonial Marines settles for basement-level military sloganeering. Oorah, indeed.

Where words fail, visuals may yet succeed. H.R. Giger's set and Xenomorph designs on top of Aliens's chunky military aesthetic have had a tremendous impact on the art of subsequent games, and could have been elaborated on in new and interesting dimensions. Aliens: Colonial Marines instead settles for a tour of places already seen.

Here is the Sulaco, apparently recovered from its shipboard fire. Here is Hadley's Hope, mysteriously intact despite that fusion reactor exploding. Here is the space jockey, somehow looking diminished. Poor lighting and blurry textures make all of this look flat and undetailed. Only the first moments on LV-426 produce any kind of impression at all, and it's one quickly ruined by the appalling "waterdrop" effect the game applies to let you know it's raining. 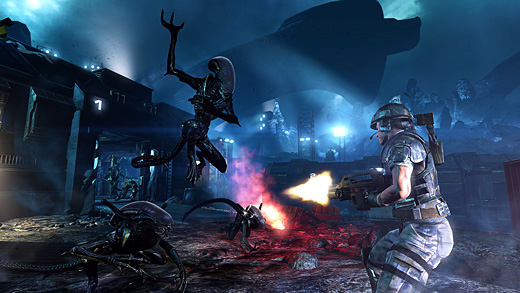 As for the aliens themselves, none of their sinuous menace is preserved. The art design makes them look flat rather than sleek, and while they dutifully climb on walls and ceilings, it never looks terribly convincing. Even worse are the blind, explosive aliens inhabiting the colony's sewers, which stagger around with the clenched-buttock shuffle of a man desperately seeking Kaopectate.

Matters degrade further when the lousy AI and clipping issues enter the picture; the Xenomorphs frequently crouch in place or get trapped in the scenery, rapidly evaporating any sense of danger. In the final fight against the alien queen, she got stuck on a cargo container and only came free when I got close enough for her to punch me. When the Xenomorphs do go on the move, it is frequently to charge straight at the player across wide-open arenas, puncturing any sense that these are cunning killing machines.

While the story and aesthetics are clear disappointments, some value might have remained if Aliens: Colonial Marines were a competently-constructed shooter. Alas, it is not.

Ally AI is ludicrously ineffective, even when equipped with the game's most overpowered weapon. Xenomorphs soak up bullets without visible reaction, making the guns feel weightless and neutered. This goes both ways, as the animations for up-close encounters with Xenomorphs and facehuggers seem detached and remote, as if the aliens and the viewpoint are in different worlds. Yes, you can shoot things and they will die, but despite the subject matter, the whole thing feels less immediate than Doom.

Level design mostly falls into the linear corridors favored by modern military shooters, spiced with a few opportunities to slide through an alternate route so as to disarm a sentry gun. On the Sulaco, the construction was so poor that I caught sight of the surrounding skybox through numerous gaps in the level geometry. Once the action shifts to LV-426, Aliens: Colonial Marines supplements the corridors with confusingly-designed open areas that are clearly too much for the engine to handle. Textures pop constantly, despite the fact that the new textures are only marginally less blurry than the ones they replaced.

I have played many bad games, and often found something interesting and valuable in them. Even NeverDead and Alpha Protocol, games I hated, could be praised for at least having one or two original and intriguing gameplay concepts. I can make no such claim for Aliens: Colonial Marines

. Banal in its themes, laughable in its dialogue, insipid in its art, tedious in its gameplay, and abysmal in its execution, Aliens: Colonial Marines is an utterly irredeemable piece of garbage, not even worthy of contempt. Rating: 0.0 out of 10.


Disclosures: This game was obtained via retail purchase and reviewed on the Xbox 360. Approximately eight hours of play was devoted to single-player modes and zero hours of play in multiplayer modes because why would you even bother?

Parents: According to the ESRB, this game contains blood and gore, intense violence, and harsh strong language. Guns will sever limbs of human and alien enemies, dismembered corpses abound, and yes there are a few chestbursting scenes. Only buy this for your children if you don't like them very much.

Deaf & Hard of Hearing: Subtitles are available for "important" dialogue, and all sound cues have a visual counterpart. As an added bonus, you won't have to hear the voice acting.

Reviews like this make me wonder why GameCritics exists. What’s the purpose of a second opinion if that opinion adds nothing not covered in the first opinion? Safe to say that Aliens: Colonial Marines is a retail disaster. The game has received near-universal negative reviews, and a 44 aggregate score on Metacritic. But most reviews tend to focus on the single-player campaign and ignore the unique aliens vs. humans multiplayer. In this case, the second opinion writer could take the opportunity to focus on the multiplayer seeing as the first op covered the bases of the single player pretty well.… Read more »