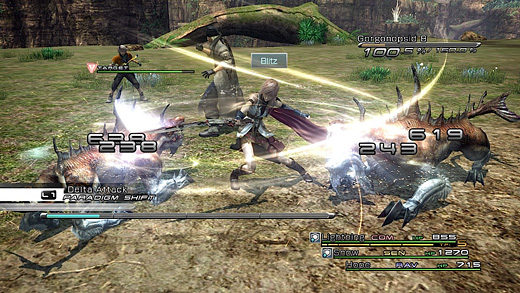 I have more to say about Final Fantasy XIII, but that post is so depressing to write I thought I'd hold off for now and elaborate on a point I made in my post discussing its combat mechanics. Role-playing games (RPGs) tend to get broadly divided into "turn-based" and "action" categories, distinctions that are not particularly informative, often get used inaccurately, and don't usefully elaborate the relationship between the player and the system. The battle systems in RPGs can be described in a variety of orthogonal ways, each of which has some value for describing the game's engagement with the player. Here I want to focus on the role of the player in dictating the course of the battle. Traditionally the player has either been an "actor" or a "director", but in the past decade or so, "producer"-style play has also become common. Depending on context, any of these player roles can be used to generate a compelling play experience, but an understanding of their strengths and weaknesses is essential.

Of course, many battle systems ask the player to perform in more than one of these roles. The Tales series is a useful example that will allow me to introduce the terms. In these games, the main character is under the direct command of the player, who has significant control over the timing of attacks and the spacing of the battlefield. An attack typically succeeds or fails because of the player's input, making this an actor-style system. In some Tales games the player also has the ability to directly command another character to do use a skill or attack. However, the player does not have complete control over that character; the success or failure of the attack is therefore determined by the game, rather than the player's input, making this a director system. Finally, for times when they are not directly controlled by the player, the other characters in the party operate according to AI scripting that the player can modify to suit his tastes. Here, all the actions of the characters are dictated by the system, albeit within the parameters of player orders, making this a producer system.

It is vital not to confuse "actor systems" with "action RPGs". Battle systems with continuous time and instant attacks (typically what is meant by "action RPG") usually position the player as actor, although this was arguably not the case in Mass Effect and Alpha Protocol. However, actor systems appear in many turn-based and round-based games. For instance, the Shadow Hearts series uses a "Judgment Ring", where the player must tap a button as an indicator moves through colored segments on a circle. Successfully hitting the correct areas leads to more effective attacks; missing them results in attacks failing or doing less damage. Because an attack's success or failure is in the hands of the player, this is an actor system, one that is implemented in every facet of the game. Similarly, the Mario RPGs (I am thinking of Paper Mario: The Thousand-Year Door specifically) require the player to tap buttons at a specific time in order to make attacks succeed. 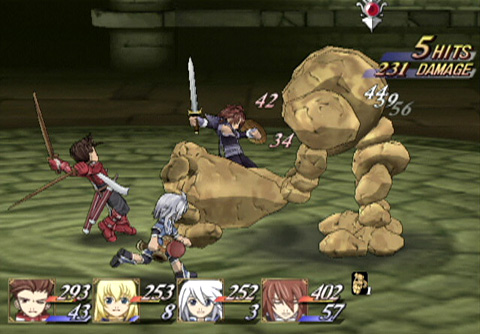 For action RPGs, actor-style systems are de rigeur, and the implementation of alternative systems is often met with dismay. However, the actor role has multiple advantages for turn-based and round-based systems. By holding the player's attention and input throughout the combat turn, an actor-style approach can keep the player thoroughly engaged in situations that would otherwise allow his attention to wander or boredom to set in. Combat ceases to be a matter of "dialing in" attacks and requires a certain degree of skill for maximum effectiveness. However, this skill requirement is not always desirable, or necessarily compatible with cerebral combat. That said, there is no intrinsic reason why an actor system must rely on the player's timing. An RPG that presents a player with a puzzle that must be completed in order for an attack to succeed would also qualify as an actor system.

The perception that mainstream gamers find turn-based systems too complicated or boring has led to an increasing prevalence of continuous-time RPGs in recent years, of both the turn-based and instant variety. Games like this tend to work perfectly well as single-player, one-character experiences, but if a multi-character party is employed, combat rapidly becomes too difficult to keep under control. As a result, additional party members must be governed by AI (with the rare exception of games like The World Ends With You that implement actor-style control for both party members). This approach, however, diminishes the player's feeling of control, and can lead to considerable frustration when the AI does something unexpected or unwise, costing the player a battle. As a consequence, the ability to tune the AI to various degrees has been put into the player's hands. These producer systems, where the player gives general guidelines to an AI but otherwise has little or no control over party members, have typically appeared as adjuncts to actor systems, although in the case of Persona 3 one appeared alongside director elements. Final Fantasy XIII represents an unusual case of a game where producer-style play is almost always optimal.

The downside of producer systems is the player's remoteness from the action. Even with the ability to tune the AI, the player will often feel a lack of control and frustration with party members. This is not a problem that can necessarily be solved by improving the AI. A player will be irritated with AI-controlled characters that don't go along with his envisioned strategy even if that strategy is wrong. The problem for a player often isn't that the AI made an objectively wrong decision, it's that the AI made a choice he wouldn't have. Some games successfully smooth over this problem—in Persona 3, for instance, these moments were part of the larger thematic framework—but generally the player's control feels approximate at best, leading to needless frustration. In addition, unless paired with a highly engaging combat system (e.g. an actor-style character or complex and challenging battles) producer games can bore their players. 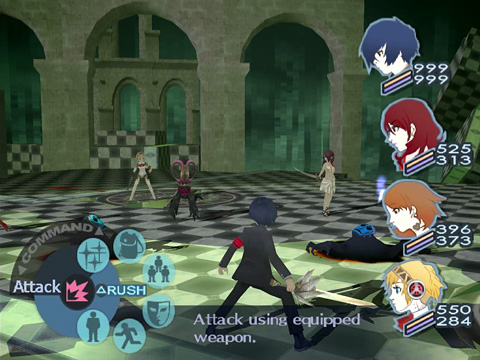 Computer role-playing games evolved from dice-based pen-and-paper RPGs, which themselves evolved from stat-based war games. As a consequence, most early computer RPGs used randomizers and statistics to determine the outcome of battle actions. Because the player dictates every move, but cannot directly affect the outcome of his choices, these are director systems. The history of computer role-playing games bristles with examples of this approach. Typically, the player selects an action from a menu of options, and the system then decides whether the action succeeded and to what degree. The director style is most identified with turn-based and round-based systems. As mentioned above, however, there are some modern examples of games that use a director approach without turns.

The input required by a director system is usually sparse enough to allow a player to control the whole party, even in RPGs where time in combat passes continuously. The Active Time Battle System used in Final Fantasy VII, for instance, used continuous time without an adjunct producer-style system for the party, and with some effort even Final Fantasy XII could be played this way. In discrete-time RPGs, especially those where the player has complete freedom to reflect, director systems become most interesting and challenging when combat presents a complex problem that must be solved by careful choice of actions. The Press Turn system of the Megaten games is an excellent example: in this system choosing the correct attack, even against a fairly weak creature, is the difference between a rapid death and an all-out romp. Final Fantasy X represents a more mainstream example. Because certain monsters are only vulnerable to particular characters (especially early on), wise reshuffling of the attack team is essential to successful combat.

Bold statements that one approach is the "best" usually boil down to announcements of personal taste. Different styles will appeal to different players depending on their desired level of engagement and the nature of the game itself. Actor systems can be exhausting, director systems can become excessively deliberative, and producer systems can frustrate and disengage the player. By the same token, however, the actor approach can improve player engagement, the director style allows for deep, strategic combat, and a producer approach can help make combat dynamic without being overwhelming. The appropriate player role, or combination of player roles, depends on the overall structure of the combat system, the desired audience and degree of difficulty, and the thematic direction of the game. The best RPG combat system is the one that addresses these concerns with a view towards creating a coherent aesthetic experience.