It Should Have Stayed There 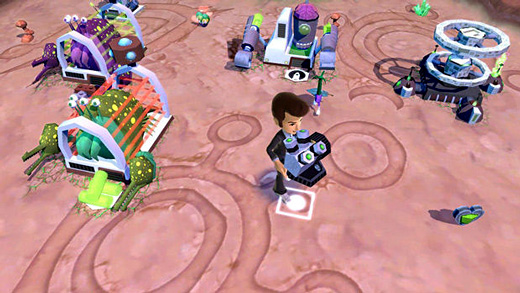 WTF Why is the layout of this area so gnarly?

Ninjabee's delightful A World of Keflings expanded on their original A Kingdom for Keflings by sending the player's avatar all over the pint-size Kefling world. Having explored those bounds, Ninjabee chose to go beyond with their alien-themed add-on, It Came from Outer Space

. Unfortunately, a number of missteps put a damper on the fun.

Outer Space adds a few interesting wrinkles to Keflings' solid city-building gameplay. The aliens can only harvest some of the resources on their own, and thus require the services of efficient little robots. Using the small number of robots effectively adds challenge to the proceedings. Additionally, the alien heads change significantly with their jobs, making it easier to parse exactly what one of them is doing at a glance.

This was helpful because the landscape of Outer Space is narrow, full of chokepoints and obstacles, with little open area for building. This design meant I had little aliens scampering everywhere. I didn't have too much difficulty finding space for buildings, but they all ended up being far apart and the resource flow was very inefficient. Late in the episode, I began to have problems with resource regeneration because a growing forest kept blocking off my route to a vital area until I finally dedicated all my aliens to clear-cutting it. With the narrow width and obstructions, this area isn't even any fun to walk around, much less build on.

Although the resources and area look familiar (they're mostly taken from the desert segment of A World of Keflings) the sci-fi theme does result in some changes to the look. The buildings have a distinctly futuristic flavor that's an interesting contrast to the medieval dwellings of the main game, but apparently it was too much of a contrast, because this content is totally separate and not integrated into the main game world.

Several of the buildings also feature giant space animals, harkening back to pulpy '50s films. Each of these can be "mutated" into new forms. This might have added some necessary depth to the episode's limited tech tree of only 15 buildings, but the mutations amount to little more than a palette swap. In addition, mutating a building sometimes produces a surprising change in its required resource, potentially making its placement inconvenient.

Outer Space doesn't make any effort to disguise the idea that what these giant space animals are doing with your resources is eating them and then pooping something else out. It's especially obvious in the case of the chicken (which turns leaves into lumpy yellow "gloop"), but scatological humor runs throughout the episode. Things kick off with some jokes about one character's incontinence, and the aliens come from "Yurbut." The banter between the alien leaders generally avoids this theme, though, and is much funnier for it.

It Came from Outer Space

was a good idea that just comes off poorly. The twisting, obstructed area design makes playing more difficult than it should be, the small number of buildings feels even more limited due to the palette-swapping, and the humor falls flat. Players who feel a desperate need for new Kefling action may enjoy this DLC, but nobody else should apply. Rating: 4.0 out of 10.


Disclosures: This game was obtained via publisher and reviewed on the Xbox 360. Approximately 3 hours of play was devoted to single-player modes (completed).

Parents: According to the ESRB, the main game contains comic mischief and mild cartoon violence. Nothing has really changed, though this add-on has an overabundance of poop jokes.

Deaf & Hard of Hearing: You shouldn't have any trouble. All dialog is text and there are no sound cues.