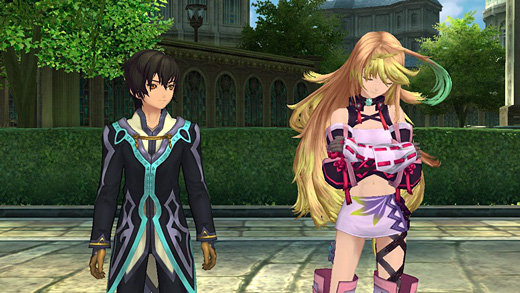 Playing Tales of Xillia made me think of Final Fantasy, which was probably not the intended effect.

Of course, Xillia is unquestionably a Tales game. Its story leans heavily on the series' core tropes—dual worlds, alienated (or alien) young women, uses of magic causing imbalances in nature—and its chaotic combat could never be confused with the more stately pace of the active time battle system. Several Tales hallmarks are downplayed, however—Xillia has possibly the simplest food system in the series, and the title and grade systems have been fused and shoved down into a submenu where they can be safely ignored. And though the combat system resembles Final Fantasy in no way at all, the "Lilium Orbs" that control character development in Xillia clearly echo the Sphere Grid of Final Fantasy X (FFX) and the Crystarium of FFXIII.

There is also an aesthetic resemblance between Xillia and the later Final Fantasys. The score, for instance, possesses the same brassy, impersonal bombast that infected Final Fantasy XII's music. Also, the game's terminology ("spyrix," "aspyrixis," "spyrites") grates on the nerves in much the same way as FFXIII's unbearable lingo did, though Xillia repeats its special words less often. More centrally, though, the construction of the world obeys the format of these Final Fantasy games. Tales has long been something of a holdout for the old JRPG formula of an open overworld studded with dungeons and towns for the player to interact with. Xillia instead has a world made of continuously connected levels, in the same fashion that the mainline FF series has used since FFX. The size, complexity, and interconnectedness of the zones here most closely resembles FFXII.

Although this construction has some upside, it tends to make the world feel small and limited. This was especially notable in the response to FFXIII, which was criticized for feeling like a series of tubes. Xillia mostly avoids that "tunnel" feeling by having larger, more open spaces and topographically interesting dungeons—another respect in which it more closely resembles FFXII. Still, Xillia feels incredibly hemmed in, because nearly every one of its exterior levels is bordered by cliffs on all sides. As a result, it feels like a world built entirely of canyons.

It's a curious choice, one probably driven by a desire to avoid the problem of the invisible wall, like FFX's Mi'ihen Highroad, where the border between the road itself and the surrounding grassland was inexplicably impassable. Surrounding the world with cliffs at least provides a reason why the player can't go in a particular direction, although Xillia seems to have no reservations about using invisible walls and false continuity in its cities. Nonetheless, replacing an invisible wall with one that's both highly visible and difficult to believe in is not an improvement. To fall back on an even earlier example of the phenomenon, the slight absurdity of not being able to climb the hills in Betrayal at Krondor was not repaired by ringing Betrayal in Antara's world with flat brown walls.

The strangest aspect of Xillia's level construction is how little is done to shake things up. In need of an impassable barrier, one can use cliffs, or uncrossable gaps, or bodies of water, but except in very limited circumstances Xillia's creators seem to have been content to just slap down cliffs everywhere, supplemented with the occasional lake. Despite sea voyages being a major part of the story, Xillia is the only Tales game where I never once saw a beach, not even when the party visits a tiny island.

The constantly looming cliffs and lack of variety make Xillia feel cramped and dull. That's no sin if the feeling connects with the story's themes or the characters' feelings. That connection is absent in Xillia, however, and as a result the world design suffers. Whatever problem Xillia's cliffs are intended to solve, the cure is worse.