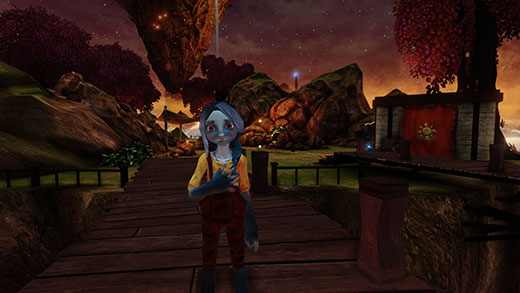 HIGH Jumping from windmill to windmill in Star Haven.

LOW Crossing a room full of floating blocks, then immediately turning around and crossing the same room of falling blocks.

WTF We can't give this main character a name?

Despite what the title might imply, A Story About My Uncle

is really a story about a nephew. Looking for his adventurer/scientist uncle one day, he find an "adventure suit" and a portal to another world before embarking upon a first-person platforming adventure that's a bit too frustrating to be enjoyable.

Initially the suit can just break falls, but it rapidly gains new abilities. Within short order the game's protagonist can jump incredibly high and use a strange grapple ray to tug himself towards faraway objects or swing along behind them. Further along, rocket boots and an ability to recharge the grapple mid-jump show up.

If this sounds like an recipe for creating fluid and exhilarating traversals across fantastic landscapes, well, that sometimes happens. Alas, the essential experience of playing A Story About My Uncle is clicking frantically on a surface that looks like it should be in range to grapple, but isn't. The game never manages to effectively communicate scale or distance, and doesn't leave a lot of padding to account for these problems. I found myself consistently misjudging what ability to use, where and how long I should grapple, or even where I should be trying to go. On several occasions I died trying to make my way to points that were completely out of reach.

This environmental miscommunication happens because the game lacks reference points. Its landscape is completely alien, and the floating and rocks and islands that compose it are all of different sizes, and frequently hanging in air. There's a lack of elements that reach across the screen and impose scale on these rocks. Also, things like absolutely enormous windmill blades or other graphical effects make distances very difficult to judge. The choice to make the game first-person exacerbates the problem because it removes the cue of the character's own size.

The choice to make the game first-person also drains the adventure of some personality. The protagonist is a child, but almost nothing about the game lets this show. It's narrated by his adult self, the scale problems prevent any real sense of the protagonist's size in play, and the character himself only appears onscreen as a hand in a glove. Fortunately the game's visuals lend it a lot of flavor—with the exception of a final level set in some ice caves, the landscapes are beautiful and the two towns have distinctive charms. However, some of the youthful adventure is lost by not being able to see the kid or his reactions to the story's incredible events.

The dialogue can't repair that problem. The writing is a touch off everywhere, and bizarre phrasing occasionally crops up—in one instance the narrator seems to imply he was hatched from an egg. The voice actors also don't seem like native English speakers. They know the words well enough so that the game is perfectly intelligible, but the dialogue is full of odd pauses and strange rhythms. This makes everything sound a bit awkward, and neuters the game's better lines. A Story About My Uncle also has a conspicuously weird insistence on not revealing the main character's name, for no apparent reason.

The core failures of A Story About My Uncle

have little to do with narrative, however, and more to do with fundamentals of design. When the game lets its main character race through the world, bounding across chasms and flinging himself here and there with the grapple, it is really wonderful. That happens all too rarely, however, and instead the game breeds repeated frustration brought on by the difficulty of figuring out where the protagonist should grapple, why he can't, or what to do about it. Rating: 6.5 out of 10


Disclosures: This game was obtained via retail purchase and reviewed on a home-built Windows 7 PC equipped with an Intel i7 processor, 8 GB RAM, and a single Radeon 270X graphics card. Approximately 6 hours of play was devoted to single-player mode and the game was completed using mouse and keyboard. A controller can be used but I found it miserable to play this way.

Parents: As of press time this game has not been rated by the ESRB. However, there's literally nothing to worry about and I would rate it E.

Deaf & Hard of Hearing: Subtitles are available for all important dialogue. The game contains collectibles that are generally found by following the sound they make. An inability to hear will make these much more difficult to find. Also, there's a significant amount of jumping, swinging, and rapid reorientation in three dimensions, so players who are susceptible to motion sickness in first-person games may have serious problems.

[quote=Pedro]What is with the comments being held in moderation for a week?[/quote] We recently restored email notifications on comments so that should help with the faster comment approvals. Sorry for the long delays!

What is with the comments being held in moderation for a week?

I agree with the Exhuminator – Miasmata is an incredible game. Not necessarily for the reasons mentioned, but it hits a home run in almost all aspects of the game.

Since you seem to enjoy esoteric indie PC games, I wonder what it would be like if you reviewed 2008’s “The Void”. If you ever have a lull and need something to play/review, it’s my suggestion. Another would be 2012’s “Miasmata”. I think your scientific background would lead credence to enjoying its finer aspects of botany and exploration.