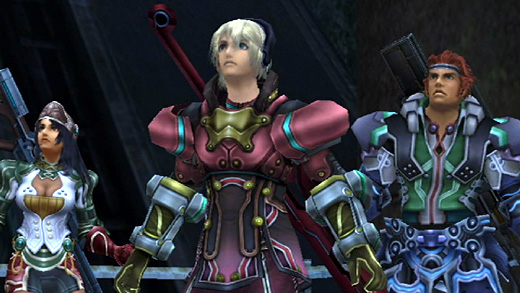 has heaped ambitious praise on the project. Not content to appreciate Xenoblade's design on its own merits, many critics have asserted that it points the way towards "saving" the Japanese role-playing game (JRPG). There are good reasons to be dubious of this assertion. For the moment, though, I want to focus on something Xenoblade gets right, and the best way to do it is by focusing on something it gets very wrong: Valak Mountain.

I haven't reached the end of Xenoblade yet, but I find it hard to imagine that it contains a worse region than Valak Mountain. The area consists of a big, fat, boring path with many tiny little walkways leading to side areas. The steep slopes of the area play very poorly with the game's camera, and produced some nigh-incomprehensible angles in combat against flying enemies, which are plentiful. The landmarks that enable fast-travel have been placed around the edges of the area, making some areas such a pain to get to that a player is unlikely to ever revisit them.

In many respects Valak mountain also seems to be indulging some designer's delusion that he is working on a platformer. Some spots can only be accessed via narrow ledges that are extremely easy to fall off thanks to the wonky controls. Worse, some areas can only be reached by carefully timed jumping, in a game that simply doesn't have the tight controls to support those moves. In fairness, none of these areas are required except for sidequests, but trying to finish those quests can, as a result of the troublesome design, be incredibly frustrating.

Then there are the unfortunate visuals. Valak Mountain is mostly a vast land of white on white, and when snowstorms come, it gets an extra layer of white on top of that. In fairness, there are a few spots where blue and green accents show up, and a tiny lava zone is stuck into the map like a inflamed appendix, but the bulk of the zone is as white as cottage cheese served over rice. Timing is part of the problem: after seeing the glories of The Elder Scrolls V: Skyrim's winter landscape in HD, the mushy standard-def graphics make Xenoblade's boring snowscape seem even worse.

I only ever enjoyed Valak Mountain at night. The structure of the area doesn't improve when the sun goes down, but the music gets better, and the visuals transform from the white dullness of day into a fantastic evening glow. The monsters also shift slightly into forms that reflect the light of the crystals, hinting at facets of an ecosystem without digressing into the interminable magibabble that has turned many a JRPG into an insufferable torture. 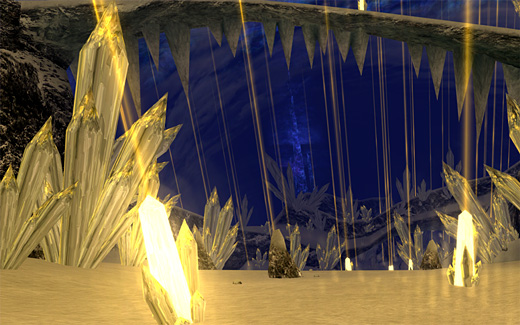 What goes right with Xenoblade is that this, the most structurally awkward and least visually impressive zone in the game, is miles more interesting to look at and explore than at least 90% of almost any major western RPG you can name from the past five years. The west may have developed more sophisticated systems and more interesting stories, but it often seems like its developers lag behind in terms of visual imagination. Tolkienism is partly to blame; WRPGs seem reluctant to stray from his ideal landscape of unmarred British countryside. Even when they do, though, WRPGs seem fettered to some ideal of realism, even though the most striking parts of their worlds are those furthest removed from our own.

Skyrim's most striking locale is the otherworldly Blackreach, and Oblivion's world bored me to tears until I visited the Shivering Isles. I can't even remember what any of the places I visited in Fable or The Witcher games looked like, and the only part of Dragon Age that even slightly caught my eye was the Fade. Meanwhile, even JRPGs that didn't impress me, such as Final Fantasy XIII and Tales of Graces, have zone after zone of striking visuals.

, with its world built from the bodies of petrified titans, has a leg up when it comes to bizarre visuals and level design—not long after the slog through Valak Mountain, the player will be exploring a region made from one giant's severed hand. Nonetheless, this degree of visual imagination is evolutionary, rather than revolutionary, with respect to JRPGs. At a time when that genre sees almost universal denigration, it's worth keeping in mind that JRPGs still do some things far better than WRPGs. Xenoblade has been praised for taking on aspects of western design. Hopefully, western studios will also see the value of freeing themselves from the fetters of their overly conventional settings.

[quote=DJ]
I agree about the visuals 100% though, this game is stunning and by far the most impressive visuals I’ve experienced in a game. Especially Bionis’ leg and Makna Forest.
[/quote]

Just goes to show how far a little bit of imagination can go. Something which unfortunately is frequently forgotten in the space race for texture and resolution.

I only had one problem with Valak mountain, and it was the camera while going downhill, the narrow mountain paths looked scary and felt unstable, but I never once fell down. And the jump adds to the mystery of the area, it isn’t supposed to be easy to make, but once you make it one time, you get a teleport area opened so you never have to do it again.. and you can save before the jump and load if you fail, which takes about 5 seconds in this game. So yeah, 30 seconds of frustration which is probably the… Read more »