What’s Time Got to Do With It?

HIGH Racing through an exploding train filled with… lava?

LOW Most boss fights go on way too long.

WTF What on earth happened to that poor badge merchant?

A mysterious spaceship piloted by a young girl in a top hat arrives at a new planet. Within moments, a mishap causes every last one of the “time pieces” that powers it to be blown out of the ship and out onto the world. Naturally, this means Hat Kid will spend the duration of A Hat in Time romping through dozens of levels gathering her time pieces again.

…She’ll also collect comic book pages, strange relics, various currencies, and balls of yarn so she can make newer, better hats. All this grabbing relies on competent, if generally simple, 3D platforming, though A Hat in Time stumbles when it comes to precision work.

Small platforms, especially after long jumps, were the bane of my time with the game because they typically required a wrestling bout with the camera, which frequently moves to disadvantageous positions on its own. Even when the camera isn’t swinging around, maneuvering it to the right place is generally awkward. Consequently, tricky parts with direction-reversing wall-jump sequences and leaps to small, distant moving platforms feel less like challenges and more like cheap shots. A Hat in Time also likes to hide collectibles and other points of interest behind the camera’s poor handling.

Fortunately, these tricks are rare, and the platforming is largely breezy and mobile. When A Hat in Time focuses on flow, chaining together jumping, swinging, diving, and the various cancels for these, it becomes a joy to play.

It’s less joyous when Hat Kid fights enemies, primarily by dive-bombing them or whacking them with an umbrella. Combat never became interesting at any point, and was a particular drag in during overlong boss battles.

The bosses appear at the end and sometimes at the midpoint of A Hat in Time’s four main worlds. These include a sunny island inhabited almost exclusively by “mafia” who speak like cavemen, a creepy forest ruled by a lawyerly ghost, and a vast alpine region connected by ziplines. A Hat in Time also features a movie studio staffed by birds (most notably some delightfully creepy crows in trenchcoats). Most of these worlds are reasonably well constructed, though the forest feels a little difficult to navigate due to the lack of good reference points. 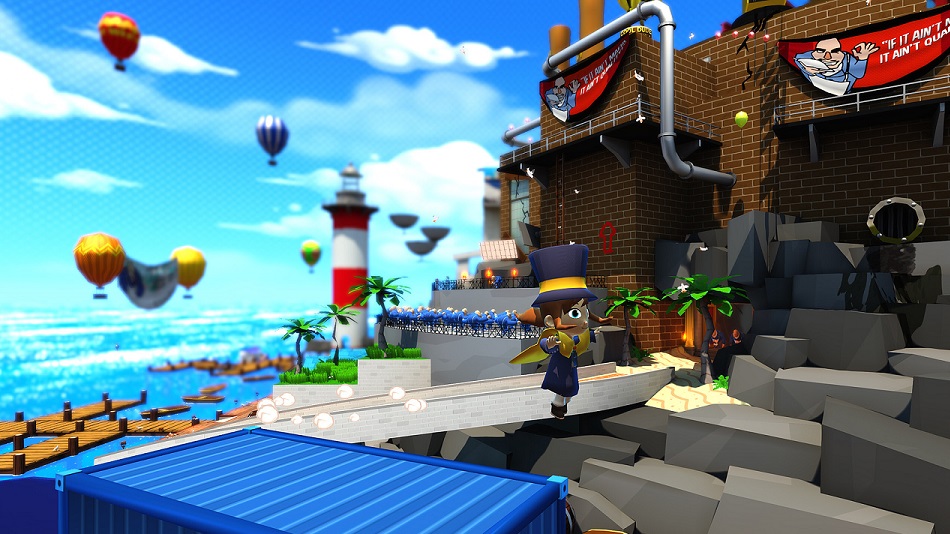 In its overall construction, however, A Hat in Time feels incoherent. Its disparate regions, while individually enjoyable, lack any kind of overarching logic or even a unifying aesthetic to tie them together. One never gets the sense, until they are jammed together at the end, that any of these places belong in the same universe together, much less that they communicate.

This sense of disconnection extends to the narrative, which goes to a lot of trouble in the first region to set up a mustachioed girl as Hat Kid’s rival and then proceeds to forget about her existence until the very end. The only unifying structure the game possesses is collecting the time pieces. To flesh that out a great deal of stuff has been created, but not much has been done to see that it all fits together. Along the same lines, the things Hat Kid collects can reverse time, but that fact never enters gameplay.

This kind of incoherence is present elsewhere as well. Most of its areas have an open structure, changing slightly depending on what “chapter” is being played, but the film-making birds have a linear structure that heavily features stealth, of all things. Other bizarre little one-offs abound — Hat Kid has to deliver mail on a scooter in one level, and another sees her hiding under furniture from an angry spirit in a mansion.

Hat Kid can augment her abilities by wearing different hats (she has to make them from yarn she collects, natch) and sticking various badges onto them. This sounds entertaining, but in practice few of the hats see much use, and the unwieldy process of switching between them prevents their powers from being combined in any interesting way. By making a grappling hook a badge rather than a piece of equipment, the game ensures that the player essentially has to wear that one full-time, although none of the other badges are interesting enough to make the player miss them.

What is missing is an identity. I never got a sense that I knew what A Hat in Time was about either as a story or as a game. Its various worlds don’t cohere, its plot doesn’t exist, and its systems never really play off each other in an interesting way. No single aspect of the experience is terrible, but the good bits never build to anything. Consequently, A Hat in Time is a cute, breezy little thing that rolls off the mind as soon as it’s completed. Rating: 6 out of 10

Disclosures: This game is developed and published by Gears for Breakfast. It is currently available on PC and Mac via Steam and GoG.com (PC only), PS4, and XBox One. This copy of the game was provided by the publisher and reviewed on a home-built Windows 10 PC equipped with an Intel i7 processor, 8 GB RAM, and a single Radeon R9 270X graphics card. Approximately 17 hours of play were devoted to the single-player mode, and the game was completed (all time pieces collected). There are no multiplayer modes.

Parents: According to the ESRB, this game is rated E10+ and contains Fantasy Violence and Alcohol and Tobacco Reference. The game is bloodless and most of the violence comes across as silly. There is one section that might frighten really young kids, but otherwise this is an all-ages joint.

Deaf & Hard of Hearing Gamers: Nearly all dialogue appears in speech balloons. Basic gameplay has no essential sound cues, but a few minor bonuses have an audio-only timer.

Remappable Controls: No, this game’s controls are not remappable. It can be played with mouse & keyboard or controller. Mouse & keyboard controls cannot be reassigned, and there isn’t so much as a list of keys or a controller map available in the settings menu.