Second Verse, Worse Than the First 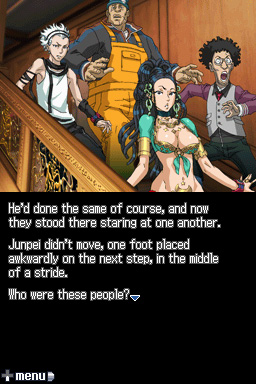 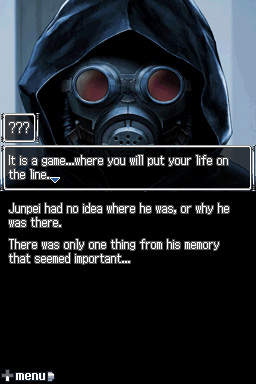 HIGH The game's climax, which does a magnificent job of tying its plot and its relationship arc together.

LOW Completing the game for the third time and realizing I'd have to do the first puzzle again again.

WTF Lady, we are about to die of hypothermia. I do not need to hear about ice-9.

Junpei awakens in a ship's cabin that's rapidly filling with water. Against his will he's been entered in something called the Nonary Game, masterminded by a psychopath named Zero. Along with the nine other contestants, Junpei has nine hours to find a way through numbered doors that bar the way between him and freedom. For a while, this idea sustains a decent game with a good story. The problem for 999: Nine Hours, Nine Persons, Nine Doors

is that it can't support the multiple playthroughs that are required in order to "win."

999 consists of a series of visual novel segments interspersed with puzzles. Behind each of the numbered doors lies a series of rooms the player (as Junpei) must explore to find keys that unlock the way out. These puzzles often have several steps and can be modestly challenging, but unlike the most odious problems of the classic adventure games, all of them can be solved by thinking like a normal person. A little lateral creativity is required to, say, use a frozen chicken leg as a hammer, but in general the parameters of the puzzles are clear enough that a little logic will get you through.

At times I found myself feeling a little disappointed by the lack of difficulty, especially in the case of the final challenge, a fairly easy sudoku. I didn't feel any of the puzzles were interesting enough to deserve a second go-round, but as mentioned this is essentially required by the game's structure. Although each individual playthrough will only go through 3-4 of the doors, getting every ending (or, if you're unlucky, just getting to the good ending) requires quite a few repeat visits. The very first puzzle in the game is repeated every time.

Although the Nonary Game is meant to be threatening, the challenges that lie behind the numbered doors rarely pose any serious danger on their own. As a result, the tension is derived from the time limit—after the game begins, the ship will sink in nine hours. Unfortunately, that limit only matters to the story; the player is under no obligation to finish the game's puzzles quickly. As a result, the tension must be maintained by the characters' behavior and dialogue, in which respect the game fails. 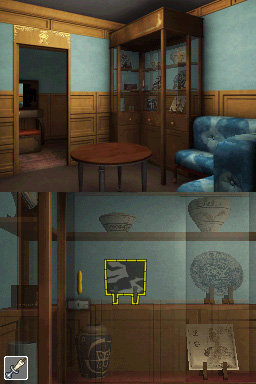 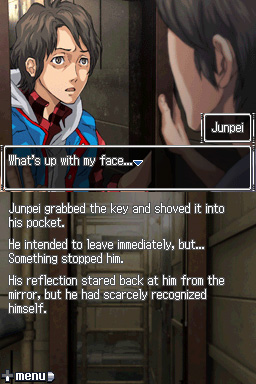 The other participants in the Nonary Game constantly break off into extended digressions about the Titanic, glycerin, the ship of Theseus, or prosopagnosia. They even indulge in these expository detours during the rare moments of actual danger, as when a discussion of ice-9 breaks out between lightly-dressed characters facing death in a freezer. Aside from the injury these do to the sense of tension, these bizarre conversations act like flashing lights pointing out future plot twists. Chekhov's Gun must be onstage, of course, but it needn't be placed in a neon-lit box with a sign saying "Somebody's gonna get shot!"

Outside of the puzzles, danger is occasionally evident. Several characters die no matter what choice is made, and suspicions abound between the strangers whom Zero has brought together. The story turns out to be pretty clever, and its twists are generally supported by well-thought-out characters. In detail, however, things aren't particularly well-written. Descriptions are often trite and repetitive, and in general the text is the sort of overly-melodramatic stuff one expects to see out of low-grade pop fiction.

This pop-fic quality isn't a problem except in that I received no joy from it, and wanted to get through the words as quickly as I could. Unfortunately, there is no real way to adjust the text speed. The story trickles onto the screen one letter at a time, then requires input to advance to the next line. While text the player has seen before (as part of an earlier playthrough) can be advanced rapidly by holding a directional button, this grinds to a halt for conversations that often differ only very slightly from something read several times before. Moreover, some text segments can be extremely long—getting the "normal" ending required me to spend well over an hour advancing text through an overly wordy and unpleasant finale.

As expected, most of the ways Junpei's experience in the Nonary Game can end are bad or fatal. One or two of these provide interesting revelations, but others don't offer so much as the satisfaction of identifying Junpei's killer. Even the good ending doesn't really satisfy. In order to defeat Zero's game and escape his impending doom, Junpei must forge a connection with his love interest that transcends space and time. After a feat like that, you'd think the game would at least bother to pay off its romantic subplot, but instead the "true ending" is an epic tease that, after a tremendous climax, doesn't deliver emotionally in the denouement.

is a good experience, and in parts it can be quite clever—I particularly enjoyed that the game made the existence of its multiple endings an explicit part of its plot. Unfortunately, the weak prose doesn't justify the time investment, and the puzzles don't hold up through the mandatory replays. The super-easy final puzzle and uninspiring conclusion would be fine for a single playthrough, but don't feel like enough of a reward coming on the heels of three or four. Clever as it can be, 999 isn't interesting enough to justify the number of times it must be repeated. Rating: 6.0 out of 10.

Disclosures: This game was obtained via retail store and reviewed on the Nintendo DS. Approximately 9 hours of play was devoted to single-player modes (completed 6 times).

Parents: According to the ESRB, this game contains blood, drug reference, strong language, suggestive themes, violence. In each playthrough at least two characters get violently murdered; one ending involves eight killings. Although the graphical depiction of the gore is not especially bad (just bloodstains), the text description gets pretty detailed. Players young enough to be warped by this probably don't have the patience to read all the text anyway.

Deaf & Hard of Hearing: The game's information is all visual and it can easily be played with the sound off. The stylus and buttons are never needed simultaneously, so players with limited hand mobility should have no problem.

You can make the text go faster even through the first playthrough by holding your stylus on the touch screen. I figured that out by accident. The text goes quickly but not so quick so that you can’t read it.

When you’re reading a book that has a good plot but terrible writing, you can at least skim through to get to the good parts. I seriously went into a rage when I had to manually click to hear people say things like “Let’s go through the door” *click* “Yes, let’s go.” *click* “What are we waiting for?” *click* “Ok, let’s go.”