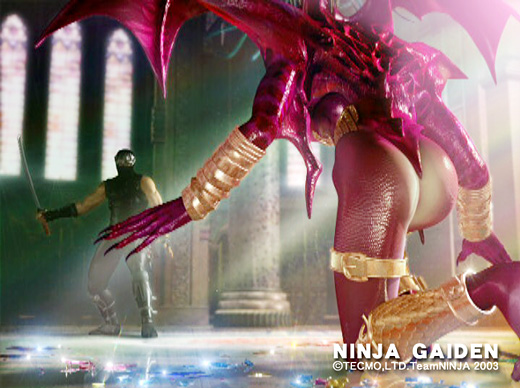 Don't get me wrong, I enjoy breasts as much as the next heterosexual guy, but what bothers me about Rachel (and her breasts) is that this is exactly the sort of juvenile misogyny I keep hoping videogames will once and for all be done with. It represents an outdated, antiquated attitude, one that assumes that all gamers are acne-challenged, Pringles-eating 18-year-old "horn-dogs" who can't get dates. (My apologies to any acne-challenged, Pringles-eating horn-dogs out there.) Compare Rachel with a more mature and complex—and much smaller breasted—female character like Bastila in Knights of the Old Republic, and I can't help but wonder if developer Team Ninja is locked away in a biosphere with nothing to read but Playboy magazines circa 1972.

The size of Rachel's breasts might be forgivable if there was anything more to her character than just those mammoth mammaries. It's never especially clear who she is, or who protagonist Ryu Hayabasa is, or who anyone in the game is for that matter. Ninja Gaiden obviously isn't big on character or plot; the game's narrative is so nonsensical (Ryu dies, then somehow comes back to life in the next scene wearing cooler clothes?) that it makes the head-scratching back-story of Rygar: The Legendary Adventure feel like The Brothers Karamazov by comparison. Honestly, a Bazooka Joe comic has more dramatic depth than this. And Ninja Gaiden's dialogue is so painfully lousy that it makes me wonder if it was written (or rather "written") by tossing the following words into a hat—"demon," "empire," "sword," "descendent," "awakening," "unfathomable," "village," and "ancient"—then pulling them out at random, adding a few prepositions and verbs, and voila, we've got instant Team Ninja dialogue. Note to Team Ninja: Please hire a writer next time. Perhaps even two writers. Thank you.

Yet despite the game's multitude of sins, including a frustrating camera system that frequently left me wondering where I was and what I was doing, all is completely forgiven—yes, 100-percent forgiven—thanks to the scintillating, wildly gratifying gameplay. The truth is, I had a great time with Ninja Gaiden. Playing the game gave me—I don't know how else to say this—a buzz; I felt a light-headed giddiness that I can only describe as a high of some kind. And it was a high, like most highs, that I eventually came to crave. I'd power down the Xbox, assuming I was finished for the night, only to find myself involuntarily loading up the game again a few minutes later.

And what I craved was the game's near-constant can-you-deal-with-this? challenge. Make no mistake: Ninja Gaiden is hard. Not impossible by any stretch, but hard, yes. The enemies in the game are highly skilled and almost always attacked in groups, usually sending in a pair of foes to engage me while leaving a third just out of range who seemed to be waiting for me to make a mistake. And once they spotted an opening, once I made that mistake they seemed to know I was going to eventually make, they pounced, lopping huge chunks off my health bar, sending me reeling backwards and scrambling for another blue bottle of Elixir. (I must have consumed thousands of gallons of the stuff over the course of the game.) The boss battles in particular are of the highest quality, especially the white-knuckle showdown with the Darth Vader-like Doku. Trust me, sweaty palms are guaranteed.

But what ultimately makes Ninja Gaiden so compulsively addictive, what gives me that heady buzz I described earlier, is the game's unique sense of discovery. I'm not talking about external discovery—exploring maps, locating scarabs, acquiring new weapons-all games have this—but what Ninja Gaiden has that very few games have is a tangible sense of self-discovery. Whenever I stumbled upon a new combo for Ryu, a new move, or a new way to dispatch enemies, I found myself thinking, I did not know I was capable of that. Even now, on my third run through the game, I'm still figuring out new, more effective ways to handle what had formerly seemed like dire situations. No longer do I flee from the Black Spider Clan, a species of lightning-quick ninja that previously left me begging for mercy. No longer do I cower before the fearsome Doku, or any enemy in the game for that matter. With a string of never-ending combos rattling off my fingertips intuitively, without thought, I now stand my ground against one and all, confident in my abilities, quite certain of my power. And it's exhilarating, in the face of such overwhelming adversity, to be able to do so. Rating: 8.5 out of 10.

Parents should know that Ninja Gaiden is an extremely violent game, full of impalings, dismemberings and geysers of blood. It's certainly not for young children or the faint of heart.

Sensitive gamers and politically correct gamers will likely find fault with the game's sexist nature. Ninja Gaiden is also a supremely difficult game requiring much patience and practice, especially during the early levels.

Casual gamers will likely find themselves discouraged, but those who endure will find this game to be one of the most entertaining and deeply satisfying action titles to come along in recent memory.

Devil May Cry fans and Tenchu fans will no doubt thoroughly enjoy the proceedings.

Fans of ninja culture will also likely appreciate the game.

All dialogue is subtitled, which makes it easy for Deaf and Hard of Hearing gamers to follow the game's vague plot. Unfortunately, the game's wild , which sometimes can't keep up with the speedy Ryu, means that Deaf and Hard of Hearing gamers will miss out on necessary audio cues (for example, enemies respawing off-screen make a certain sound), which could leave them at a slight disadvantage.