So here I am, doin' everything I can't 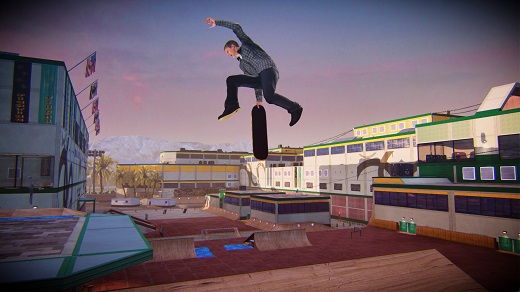 WTF Lil' Wayne is a playable skater, but doesn't appear on the soundtrack.

Tony Hawk's Pro Skater holds a special place in gaming's cultural landscape. Though once an example of the finest that arcadey sports titles had to offer, it overstayed its welcome and piled on bad idea after bad idea until it got to the infamous Ride / Shred sub-series, which was almost entirely unrecognizable compared to the source. However, I still remember when the Tony Hawk games were great, and it's been an amusing sideshow of cartoonish absurdity watching the series stumble over its own feet.

In light of all this, the prospect of a "back to its roots" reboot held promise. Stripping back the bloat and returning to the core of the experience is exactly what the series needed. Boldly positioning their new entry as Tony Hawk's Pro Skater 5 rather than a spin-off, Robomodo grabs a board and tears up the streets. To their credit, it is an authentic Tony Hawk experience. Perhaps a bit too authentic, though.

Starting the game up, it was a bad omen when the audio cut out several times during the Activision logo. The game is full of glitch, really—the collision detection is wonky and the physics occasionally send skaters flying in impossible directions, but the Tony Hawk games were never technical marvels. Less forgivable, though, are the screen-tearing and framerate problems. Graphically, it comes off like a budget game, but has a clean, simple style. It is a shame that the aesthetic simplicity wasn't paired with technical reliability. The fact that a game with this level of polish launched at a $60 pricetag is absolutely baffling, so expect a fairly rough experience.

Technical complaints aside, THPS5 is a pretty good Tony Hawk. It's not quite on the same level as the previous highpoints in the series, but it's a solid title that understands what made the old games so memorable.

For starters, this series has never really been about skateboarding—they're over-the-top arcade games. They're about thumbing the rules and making the world into a playground, jumping from building awnings and grinding down the pillars of museums. They are to real skateboarding what Crazy Taxi is to being a cab driver.

Beyond the fantasy, the games are about using a finely honed and rewarding set of mechanics to interact with the world in a way that provides a cathartic rebellion against the norms of civilized, real-world culture. In this way, THPS5 has its moments of brilliance. The levels set on highrise rooftops and a mountain ski resort provide fine examples of off-the-wall, real-world levels, while the colorful and imaginative asteroid base rounds out the fantastical side of the experience.

Mechanically, THPS5 plays like Tony Hawk's Pro Skater 4, removing any additions that came after. The core of stringing together long combos from flip tricks, grab tricks, reverts, manuals, and grinds is still here, and it's still satisfying.

I was also glad to see that the special tricks and propulsion have been simplified. Specials are activated with a shoulder button when a meter is full, and any trick performed during meter use becomes a special. It's better than forcing players to perform three- or four-button combinations to pull them off. Speeding up is now done by kicking with a button to gain speed, rather than holding the ollie button down at all times.

Those tweaks were nice, but the biggest change to the formula is in the online functionality. Levels now act as hubs, populated by other players who are free-skating or completing challenges at the same time. Though not necessarily an earth-shattering addition, it does give the game a stronger sense of community and allows for some nice "entertain yourself" moments, such as impromptu games of king of the hill or trick competitions.

In terms of extras, the game features a healthy selection of real pro skaters and a few unlockable ones including the protagonist from the new King's Quest, musician Lil' Wayne, and an unfortunately appropriate Octodad.

Unfortunately, the character selection process is a bit of a headache because some skaters are skins and some are actually separate characters. If a game is started with Tony Hawk, but then the player wants to give Lil' Wayne a try, the campaign is reset to the beginning! On the other hand, Octodad, the caveman, the robot, the alien, and others are made of unlockable heads and bodies, meaning that they can be "worn" without disrupting progress. This divide between characters is an unnecessary complication.

Overall, Tony Hawk's Pro Skater 5 is a decent installment in a long-running series, but this reboot is perhaps a bit too authentic in that it lives up to its predecessors, but fails to exceed them. Since it's been over a decade since the series's fourth entry, the sights might have been aimed a bit higher. Rating: 6.5 out of 10


Disclosures: This game was obtained via publisher and reviewed on the Xbox One. Approximately 10 hours of play were devoted to the single-player mode, and the game was completed. No time was spent in multiplayer modes.

Parents: According to the ESRB, this game contains mild lyrics. Blood has been entirely removed from this entry, there is no great sense of pain upon collisions. There are instances in which heads do explode, but it is played for laughs in a very cartoony way rather than being violent or visceral.