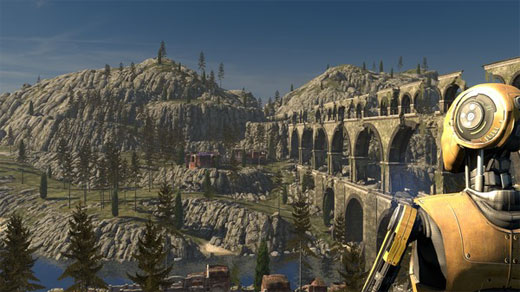 WTF Why have these writers not yet done a proper text-adventure game?

The Talos Principle was a surprise when it released at the end of 2014. Coming from Croteam, developers of the mindlessly violent Serious Sam action series, Talos caught many off-guard by being the total antithesis of their previous work. Rather than another blood-splattered arcade romp, Talos was a slow-paced and thoughtful first-person puzzle game in the vein of Portal.

Now that about six months have passed since the release of the base game, Croteam has returned with a meaty expansion, Road to Gehenna. In it, Uriel, messenger of Elohim, must free the inhabitants of the simulation from their physical constraints and return order to Elohim's world by solving mind-bending puzzles involving lasers, blocks, and other objects.

Aesthetically, the game should feel familiar to returning players since Gehenna recycles visual and sound elements from Talos. Those hoping for unique and varied locations may be disappointed. It continues to be mesmerizing and beautiful, though, and the sights are still a wonder to behold. Each corner of the map feels like a real place, and every room has a fantastic sense of place and purpose. In terms of production, it's just as alluring as it was last time.

Gameplay will also be familiar, although the expansion mixes up the formula in several subtle ways that keep everything feeling fresh. For example, sometimes the test chambers (to borrow Portal's terminology) are massive and sprawling, and access to secrets requires pieces across multiple test chambers to be aligned with one another. Croteam has created some deviously outside-of-the-box chambers that will push players to the limits of their problem-solving capacities.

In fact, if I had to level a complaint at this expansion, it's that it doesn't make concessions to reacclimatize players to the puzzles. Given that there was a significant gap of time between Talos and Gehenna, it's reasonable to assume that some players may not have these types of puzzles fresh in their minds, and the difficulty picks up right where the base game left off. There's not much opportunity to regain lost momentum.

With this steep introductory curve in mind, Gehenna is probably best when played back-to-back with Talos, although the base game is long enough that it doesn't feel like it necessitates an expansion. Those who've taken a break are likely to be lost, and those who've just finished are unlikely to want or need the appended content.

Story-wise, the original Talos often took time between its puzzles to give players the opportunity to answer philosophical questions about the nature of humanity and whether true, capital-C Consciousness was (or was not) limited to organic beings. These questions were most often asked in a very direct way, and it felt like taking a 101-level philosophy course. That's not a complaint, though—I actually found those sections quite engaging! Gehenna builds its narrative around similar themes, but comes off as more subtle in the way that it asks these questions, presenting characters and individual narratives rather than universal hypotheticals.

One aspect that I found especially engaging were the allusions to Judeo-Christian religious texts and traditional Hebrew mythology. Specifically, Gehenna refers to a real valley outside of Jerusalem, referenced often as a place of child sacrifice or war. In the Christian New Testament, Jesus uses Gehenna symbolically, and it's often translated to mean "Hell." Gehenna is a place of suffering. A place of tragedy. A place that should be forgotten and erased. Yet for some, Gehenna is home, and, though confined both physically and spiritually, the story's intelligent machines have found a way to make a community for themselves through the internet terminals that link them together.

For those satisfied with their Talos adventure, I'd say that there's nothing essential in this expansion, and it might be hard for forgetful players to get back up to speed. On the other hand, players who enjoyed the base game and want more will find Road To Gehenna to be beautiful, brilliant, brain-breaking, and heartily recommended as something that recaptures (and builds upon) much of what made The Talos Principle great. Rating: 8.5 out of 10


Disclosures: This game was obtained via publisher and reviewed on the PC. Approximately 14 hours of play were devoted to the single-player mode, and the game was not completed. There are no multiplayer modes.

Parents: The game is not rated by the ESRB, although I did not find anything objectionable during my time with the game.

Deaf & Hard of Hearing: Though sound cues are often useful, information is presented very clearly on the visual front, making the game quite playable for hard-of-hearing gamers.