By the power of METAL! 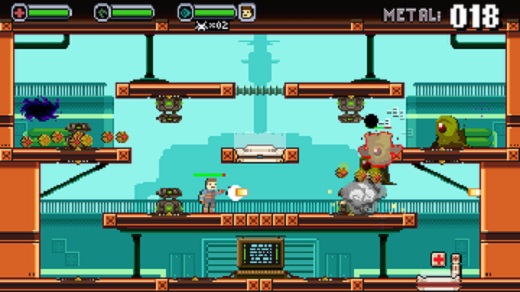 LOW The sound effects are constant and grating.

WTF The team's mineral probe has an arcade title screen?

The independent game scene has been exciting to watch over the past ten years. Most clearly defined by innovation and eye-catching art styles, it can be easy to overlook how much it's also about a lively conversation of developers silently speaking through their work to one another, discreetly passing notes with each game released.

So many of the most colorful and brilliant games today are the work of developers slyly iterating on established ideas and adding provocative "what ifs" for the community to iterate upon further. Spacejacked knowingly places itself in this conversation, and it's stronger by building on top of its predecessors.

Everything about Spacejacked feels comfortably familiar. It is, essentially, a tower defense game with relatively few frills. While it assumes a certain level of basic player knowledge and rushes through the tutorial mission, its simplicity of design should be approachable to genre vets and newcomers alike.

Players are tasked (at first) with defending computer terminals in three rooms aboard a spaceship. Aliens have found their way aboard and have their minds set on destruction.

Players can build one of three types of turret at certain spots in each room. When turrets aren't getting the job done, the player can blast the aliens with his own laser gun, though it is a relatively underpowered last resort for patching holes in the line of defense.

Turrets can be purchased and upgraded for metal, the game's currency. They can also be broken down and sold for a full refund instantly. The fact that the game does not fiscally punish the player for lack of foresight is a real game-saver, and makes the player's metal reserves a fluid resource. What's spent on defense can be fully reacquired when no longer needed, and then re-invested elsewhere when the field of battle changes location.

On the other hand, when the vital computer terminals sustain damage, they have to be repaired, and those repairs cost metal that will not be refunded. This expense is a permanent ding to the player's resource-pool, and though the game is fairly generous with its metal allowances, losing a portion adds a great deal of tension.

Ultimately, the player earns enough metal to be able to install permanent defense fixtures in each room, and this leads to a terrific sense of building the spaceship in a personal way. It's a feeling that helps make up for the small scope consisting primarily of three rooms.

Layered on top of the tower defense mechanics is some snappy, fast-paced platforming. Players navigate around the single-screen environments to attack aliens and build or dismantle turrets. In place of a traditional jump mechanic, though, the game employs gravity-flipping, similar to something like Metal Storm or VVVVVV. It's a novelty that gives Spacejacked more personality, but it's never fully explored.

Spacejacked's art employs the neo-retro pixel-esque style that's been consistently popular for the past decade. Alien designs are lively while the characters are a bit drab but well-animated and expressive, and the environments are samey but functional. Though the visuals sit in the above-average-but-still-not-particularly-fantastic camp, they earn bonus points for being mercifully readable, even during times of chaos.

Overall, Spacejacked is a more than competent platformer/tower defense title that falls short of being truly memorable, but perhaps it's most interesting for its iteration upon and juxtaposition of prominent game ideas, like VVVVVV's gravity-shifting, the retro-cool revival of single-screen arcade games like Woah Dave, and, hell, the main character bears more than a passing resemblance to Gordon Freeman (or am I just going crazy?) Rating: 7 out of 10


Disclosures: This game was obtained via publisher and reviewed on the PC. Approximately three hours of play were devoted to the single-player mode, and the game was not completed. There are no multiplayer modes.

Parents: This game is not rated by the ESRB. It contains cartoony and unrealistic gun violence.

Deaf & Hard of Hearing: The game communicates everything the player needs to know through its visuals. It loses nothing (and, at times, may even be preferable) without audio.