Jamming to the sounds of nature 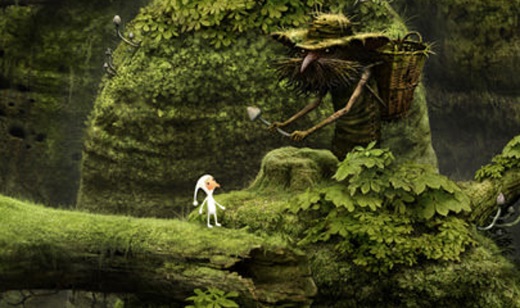 HIGH The audio design is absolutely on point

LOW A few puzzles require too much walking between areas

Amanita Design has made quite a reputation for themselves. The Samorost series, Machinarium, and Botanicula have enticed and puzzled players for more than a decade with mechanically simplistic but aesthetically rich point-and-click adventure.

Returning to the series that incited Amanita’s success, Samorost 3 follows a curious little man traveling to various planets to solve environmental puzzles and continue his journey. The game communicates entirely without written language—even in the menus—which gives it an appeal not bounded by words or literacy. The game’s core challenge comes from interacting with alien environments in imaginative ways.

Drawn in Amanita’s unique Monty Python-esque visual style, the worlds of Samorost 3 are, in equal measures, grungy and fantastical. Though much of the art design is grounded in objects that are typically associated with “gross-out” humor such as bulbous pustules, giant hairy insects and fungus, everything is approached with such curiosity and wonder that even these things showcase the beauty of nature. There is no ugliness in the worlds of Samorost, there is only life, and life of all kinds is beautiful.

Similarly, nature is depicted as being inherently musical. Objects in the environment make noise, and even the most cacophonous sounds are treated with artistic reverence. One of the game’s core mechanics is the ability to simply listen closely to the world around the character. Using his trumpet to absorb to the sounds of nature, he can reproduce the music of the world around him, opening secrets and solving puzzles.

The planets and moons visited throughout the game are wildly varied. Some feel lushly beautiful, while others spin quietly through the sterile blackness of space. Each planet has a story to tell, and a unique “thesis statement” of sorts that ties that particular leg of the journey together. The geography and wildlife encountered is bizarre, but just familiar enough to evoke a certain dream-like quality. Everything pedestrian feels alien, like a child playing imaginative games with household objects sitting around her.

Mechanically, the game is simple. Pointing and clicking will allow the character to move around and interact with the world. An occasional item from the inventory is needed, but most puzzles can be solved with simple clicks, though puzzles require careful observation of the visually-dense game environments.

Some challenges, such as triggering musical elements in order, can be trial-and-error and will possibly test the patience of players with poor short-term memories. I got through them, but I found I was more annoyed when I had to coordinate elements between multiple screens. Unfortunately, those screens aren’t always close to each other. Having to walk through two or three screens (some requiring me to solve traversal puzzles to pass through each time) began to wear on me when my efforts to implement a solution proved unfruitful.

Such frustrations, compounded by the slow walking speed, some complicated walking routes between screens, and the lack of shortcuts between disparate locations tried my patience until I realized it was like the game was pushing back against my natural gameplay tendencies. The pace became much more tolerable and actually served as a boon when I put my time concerns out of my mind and cooperated with its meditative pace.

For those having trouble with the puzzles, the game has a handy hint feature. Tucked in the menu is a tome, and inside are drawings that look like design documents giving vague answers to each puzzle. The pictures are just vague enough to require some mental legwork on the part of the player, so these hints give a satisfying boost to those who need a nudge once in a while. When all was said and done, I completed the game in about four hours, so the game isn’t immensely time-demanding under any circumstance.

For as short as the game is, though, it doesn’t feel sparse. Though not an 80 hour epic, it is a nice, bite-sized window into an intriguing world. I spent quite a bit more time, in fact, simply sitting back, having a glass of wine while watching the game world and listening to the music in the environments. Samorost 3 feels like a picture book, and it takes exactly as long as it needs to tell its story and impart its experience.

Ultimately, the game conveys a wonderful sense of adventure and exploration. Samorost 3 is an excellent point-and-click adventure game for those looking for a slow, surreal experience. Finely crafted with an exquisite attention to detail, it’s a pleasure for players who enjoy more aesthetic, less mechanical experiences. Amanita is sitting squarely atop a keenly-defined niche, and they continue to refine their delivery with each expertly-polished title. Rating: 8 out of 10

Disclosures: This game was obtained via publisher and reviewed on the PC. Approximately four hours of play were devoted to the single-player mode, and the game was completed. There are no multiplayer modes.

Parents: This game is not rated by the ESRB, but I did not encounter anything in my playthrough that parents would likely take issue with.

Deaf & Hard of Hearing: Though much of the game’s appeal comes from the sound design, it remains playable (though quite a bit more difficult to play) without audio.

Colorblind modes: There are no colorblind modes available in the options. Visual acuity and distinguishing small details are important in this game and colorblind or vision-impaired players may have trouble.