Double-jumping in a winter wonderland 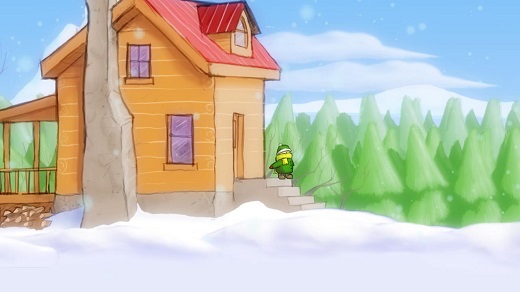 WTF Very limited options and no way to play the game in full-screen.

Having grown up on early Mario, Sonic, and Donkey Kong Country games, I can perhaps be forgiven for being skeptical about the prospect of a two-dimensional, side-scrolling platformer made entirely of snow levels. The "snow level" was, after all, the third most-dreaded challenge in those days—only slightly less awful than underwater stages and anything with "minecart" in the name. Marvin's Mittens, though, instantly thawed my initial reservations with its nostalgic innocence and joyful simplicity.

The game opens with the eponymous character playing in the snowy wood behind his house when he's suddenly ambushed by a small and devilishly quick creature that steals one of his mittens. Determined to track down his stolen mitten and the missing mittens of the magical elves that live in the forest, Marvin sets out to find the lair of this mysterious mitten thief.

Marvin's Mittens is like an interactive children's story. The plot is very simple, sweet, and sincere. The game is animated in a lovely hand-drawn style reminiscent of picture books. The mechanics are straightforward, and infused with a touch of magic that reminds me of the imaginary games children play when running and jumping through the outdoors.

Gameplay is introduced to the player gradually. Marvin walks out of his home in the morning and is free to explore the first few screens of the game's world and learns that branches coated in snow act as platforms on which Marvin can jump. There is nothing to collect at this point, though—it's the player's opportunity to run, jump, and familiarize him or herself with the controls.

After making his way through a few screens, Marvin stumbles upon a campsite full of elves that give him a magical double-jump ability which becomes the core mechanic around which the rest of the game is built.

Upon receiving his double-jump, Marvin's world becomes peppered with collectable snowflakes, and from this point forward, the game becomes a collect-a-thon, in the vein of Banjo-Kazooie or Super Mario Bros. As the player hoovers up these strategically-placed snowflakes, the double-jump becomes stronger, and Marvin is able to make his way to higher platforms, cross longer gaps, and explore more of his world.

Time passes in Marvin's world. At the end of each day, Marvin's mother calls him in for bed, where she sings to him as he dreams about his adventures that day. Fresh-faced and rested, Marvin springs out the front door the next morning, beginning his adventure anew each day.

The passage of time adds an interesting fold to the gameplay. Like Majora's Mask, it enforces a time limit to each day, meaning Marvin's progress is "reset" to some degree. Marvin keeps all of the snowflakes that he has collected, and progress hinges upon opening shortcuts between screens in what eventually becomes a long network of interconnected tunnels.

Complimenting the game's relaxed-yet-adventurous tone is a wonderful piano-driven soundtrack. Full of flight and a hint of magic, the music shifts in tone to become slower and quieter as the day winds down and Marvin's bedtime approaches. The voice acting is minimal, but delivered authentically. Marvin has the sound of being voiced by a real child, much like the old Peanuts cartoons, adding to the sense of authenticity of the character and world. Everything is very relatable, like it came straight out of the player's own childhood.

Marvin's Mittens is relatively short, and able to be completed in less than two hours. Its brevity is not a weakness, though—the game ends before its charm and mechanics start to wear thin. Those wishing to spend more time with it can collect all of the remaining snowflakes, but the game is a perfect length to be completed in one sitting, which may be great when playing with children.

In many ways, Marvin's Mittens is a perfect game for young ones. Its story, aesthetic, and mechanics are simple and inviting enough to remain engaging, but despite its younger skew, I found the game to be delightful. For what it sets out to be, Marvin's Mittens achieves its goals and capitalizes upon a special feeling that other games often miss. For those with young children or those searching for something simple and heartwarming, I would recommend Marvin's Mittens without reservation. Rating: 9 out of 10


Disclosures: This game was obtained via publisher and reviewed on the PC. Approximately 2.5 hours of play were devoted to the single-player mode, and the game was completed. There are no multiplayer modes.

Parents: Marvin's Mittens is not rated by the ESRB. It contains no objectionable content, though. It is safe for children.

Deaf & Hard of Hearing: Voice acting and sound cues are minimal. Playing without sound does not lessen the playability of the game.