Avengers, assemble! Everyone else, wait in the car 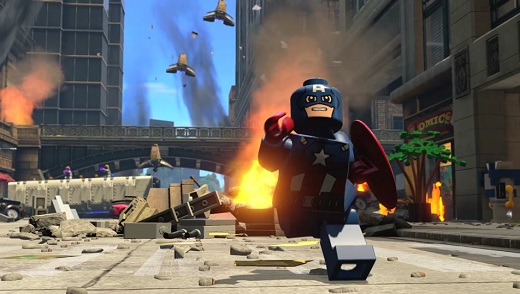 LOW Voicework pulled from the films does not work here

WTF Where did all the heroes go? No Spider-Man, X-Men or Fantastic Four?

I've long been a fan of Traveller's Tales's Lego games. Although the series has remained fundamentally constant on a mechanical level, it's been interesting to watch its evolution—not all Lego games are created equal. While little seems to change between titles, the quality can vary wildly from entry to entry.

The commonly-held high point was 2013's Lego Marvel Super Heroes, an action-packed comic book adventure with an impressive cast of characters. It featured an open-world New York to explore between missions that paired favorites such as Spider-Man, Wolverine, and The Hulk, as well as more obscure heroes like Kraven, Ghost Rider, and Howard the Duck. The cast was excellently realized, the writing was on point, the Metroidvania-like gating of content was well done, and the gameplay was Lego at its finest.

With this in mind, I was excited to see what Traveller's Tales would do with their first return to Marvel comics in three years. Unfortunately, while it's by no means a bad game, the fact is that Lego Marvel's Avengers can't hold a Human Torch to its predecessor.

The differences in structure and tone are apparent from the beginning. While Lego Marvel Super Heroes used the full comics pantheon to tell an original story, Lego Marvel's Avengers is primarily based on the two Avengers films. While this does set up some exciting moments, it's limited to the main faces of the cinematic universe. Though there's a healthy roster of playable characters (including many obscure greats) non-Avengers are partitioned off as minor unlockables and have no real interaction with the story or world.

The game, though not difficult, is not particularly kind to newcomers—I've played nearly every Lego title to this point, and I found the tutorial baffling in places. The devs really struggle to communicate the basic Lego concepts to players both old and new. I played a big chunk of the adventure with my girlfriend who's never played a Lego game before, and she was similarly confused.

After that poor start, the adherence to the film narratives only brings even more trouble.

First, the plot isn't conveyed well. The game starts with the opening scene from Age of Ultron and then backtracks to the first Avengers without explanation, and the storytelling during cut-scenes is frustratingly barebones. It's just enough to remind players already familiar with the films what scene is being referenced, but those coming to it without that familiarity will be absolutely lost. Jumps between scenes are jarring and continuity is sparse. Introduction of major characters is ignored almost entirely, with new faces popping in sans context.

The voice work makes this bad situation even worse. Avengers elects to use audio clips from the films instead of voice actors for most dialogue. While it seems like a cool touch to hear the voice of Thor, Vision, and Nick Fury as we remember them from their Hollywood interpretations, it severely limits what the characters are able to say. Most conversations feel weird and stilted—as if disparate lines are stitched together awkwardly to form conversations. Sometimes scenes are repeated from the films verbatim. Though the in-studio voice acting in previous Lego games could be hammy, it's preferable to this film clip style.

Structurally, it's important to note that the open-world hubs are handled differently in Avengers. This time, players don't have the option of returning to the open world after each level, which is a first for the series. Instead, players must quit out of levels from the start menu and then go to a global map where they can choose to replay completed levels or visit other open-world hubs. Missions are sparser than before, and the feeling of being connected to the world is diminished.

Returning to previously-played levels is also less thrilling than before. Since the majority of the game is played with the core Avengers, the various skills necessary to access things are loaded onto a small number of characters. Iron Man, by himself, can perform most of the functions needed to get through the game, making playing as anyone else rare when revisiting areas.

Graphically, the game looks nice but not noticeably better than any of the current-gen Lego games that preceded it. But, since the game is modeled after the films rather than comic books and cartoons, the visuals are more gray and drab than in previous entries. It's a shame that movies famous for reintroducing color and dynamism are represented with such a comparatively lackluster style.

Despite being a mechanically sound entry in Traveller's Tales' long-running series, it's hard to recommend Marvel's Avengers over Lego Marvel Super Heroes—the latter is still superior in nearly every way. Fans of the films might be excited to see their favorite cinematic memories re-enacted, but everyone else would be better off going with the previous installment. Rating: 6 out of 10

Parents: According to the ESRB, this game contains cartoon violence and comic mischief. Though standard beat-em-up conventions are at the center of this game, realistic violence is minimal.

Deaf & Hard of Hearing: The game remains entirely playable without sound. All puzzles are articulated visually.

Nailed it. I’d actually come down on this a bit harsher. Those “pretty X four times” tasks are so annoying, the Agent Carter stuff is repetitive (why did they load so much on her, rather than Daredevil or Jessica Jones?), the vehicles actually handle worse, which I didn’t think was possible, and since the character roster is generally so obscure (I have no idea who any Avengers Academy characters are), it’s never intuitive which powers they possess, and thus I ended up never using them. I’d dock this game harder just to deviating so hard from every Lego Marvel had… Read more »

Spot on, Marvel Superheroes pretty much is the better game. I love the Lego series in general like Harry Potter and Star Wars but this one was a little bit of a letdown, the quality of the execution is less than the rest of the Lego titles. It needed a better way to tie in the existing stories or they should’ve gone for something original from the outset.