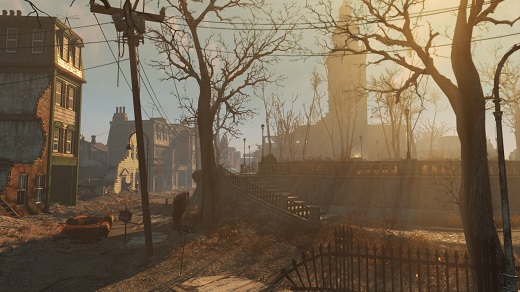 WTF Oh, it's the same "tracing through disconnected memories" scene that we've played in Dishonored, Assassin's Creed, Life Is Strange…

The Fallout series has had a varied history of different developers.

Originally crafted by Interplay Entertainment, the series later went to Bethesda Game Studios, and then to Obsidian Entertainment, each studio putting their distinctive spin on the post-apocalyptic formula. It now returns to Bethesda, directed by Fallout 3's Todd Howard.

In many ways, this second Bethesda run makes Fallout 4 feel like a nominally-updated Fallout 3. Some will welcome a return to being a more expansive, serious-minded Action-RPG, but I suspect others will miss the humor and unpredictability of New Vegas and earlier entries.

Unfortunately, the review could almost stop here because Fallout 4 has most of the same strengths and weaknesses as Fallout 3, which makes me wonder why there aren't more fresh ideas and improvements to the formula after Bethesda had almost seven years to sit and ponder their massive opus.

Fallout 4 runs on the Creation Engine originally developed for Skyrim. Though this is only the second full release to run on this engine, it already feels like it's creaking under the pressure of the game it's running. Both visually and performance-wise, the game is spotty at best.

Looking first at the graphics, Fallout 4 seems to be stuck between console generations. The most striking improvement is in the realistic feeling of sunlight, which adds a surprising level of credibility to the world. Also, many of the environmental objects and weapons are modeled in impressive detail. Visibly behind-the-times, though, are the lackluster animations, rocky lipsyncing, hit-and-miss character models, rudimentary fire and smoke effects, and texture work which doesn't impress under scrutiny.

Fallout 4's technical performance fares a bit better, but still suffers from problems. The framerate is fairly consistent, though it has the occasional drop when in larger areas, and I never had action-halting issues, but there were several instances of minor malfunctions, like subtitles repeating lines spoken three or four sentences ago, or lines even spoken by another character — a potentially catastrophic problem for players who are deaf or hard of hearing. Also, at one point a mission became unwinnable because a completed objective had been re-flagged as uncompleted, and the item required to satisfy the objective had disappeared. The NPC I had to turn the quest into refused to accept it, stalling that particular questline and preventing me from seeing the end of that story.

The shooting mechanics in Fallout 4 remain below the standards of FPS titles, but this shortcoming is rectified by the series' still-brilliant implementation of the VATS system.

VATS takes precise control out of the hands of the player and handles it with weighted random chance, as those with experience with games like XCOM or Dungeons & Dragons will be familiar with. It's a shame, then, that players must play with both systems in tandem. The shooting isn't tight enough to go without VATS, and VATS is quickly exhausted and slow to recharge. Offering the player two separate-but-viable playstyles would be welcome.

Something brand-new to Fallout 4 is that the player can now craft items and construct bases using remnants and junk found throughout the wasteland. Rebuilding towns from the ground up invests players in their continued success and allows a sense of agency over the world. Though not quite as robust a base-building system as, say, Minecraft's, it adds a new dimension. Most interestingly, it balances two contradictory systems fantastically: the disempowering individual survivalism of the main game, and the empowering, almost God-like creation mechanics of the building sub-game.

Story-wise, there are multiple storylines that guide the player through the wasteland.

The primary tale involves the main character reuniting with his son. Though it gets off to a slow start, the cast of characters becomes more colorful and interesting in Diamond City, a settlement in the ruins of Fenway Park. In a rare turn for Bethesda, the main questline actually features many of the best characters and moments to be found in the adventure, and remains engaging throughout its brief runtime. Thanks to an automaton noir detective, an eager and hard-nosed journalist, and a grossly incompetent mayor, Diamond City brings much-needed levity and interest into the proceedings.

The secondary missions are hit-and-miss. The most compelling require the player to sneak into strongholds infested with raiders and mutants, stealthily dispatching individual units without alerting the entire facility. Other missions can pit players against ramp-ups that feel out of place and poorly-implemented. One particular mission tasks the ‘Minutemen' faction with retaking a stronghold called The Castle. It culminates in an enormous out-of-nowhere fight with an infuriating bullet-sponge of a boss. Encounters such as these are antithetical to the design philosophy of the rest of the game, and do not complement the mechanics.

Overall, Fallout 4 suffers from technical issues, pacing problems, and an overall lack of refinement of its gameplay, but it remains an impressively-scaled and well-realized world. Players who enjoyed Fallout 3 and long for a return to a similar wasteland will enjoy this iteration, but players hoping that Bethesda has fixed the technical problems or kept the same wit found in New Vegas will be disappointed. Rating: 7 out of 10


Disclosures: This game was obtained via publisher and reviewed on the Xbox One. Approximately 18 hours of play were devoted to the single-player mode, and the game was not completed. There are no multiplayer modes.