I am my own worst enemy 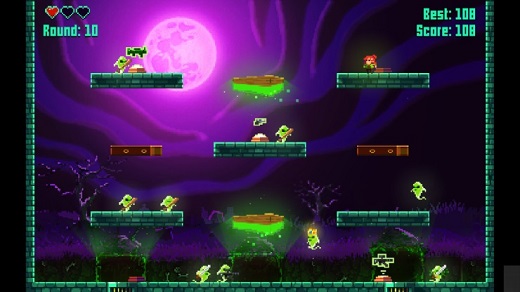 LOW A bit bare-bones on extra modes and features

WTF I killed myself again!

There are two things that I really love in this world—video games and ghost stories, so when something like Extreme Exorcism lands on my desk, I hoover it up like Luigi chasing down playful poltergeists.

The central mechanic of Extreme Exorcism is a clever one that we've only recently seen iterated upon. Similar to the StreetPass functionality of Shovel Knight or the upcoming indie multiplayer Mimic Arena, this title pits players against "recordings" of themselves, endlessly replaying their past actions.

At the beginning of a match, players are tasked with picking up weapons in a battle arena, hunting down a rather ineffectual ghost, and then shooting or slashing it. Players can hold up to three weapons at a time, and all fire simultaneously.

Upon the execution of the spectre, the stage is reset and players are asked to execute a new ghost—this time, it's a recording of their actions from the last round. As more spirits are assassinated, more and more recordings are layered on top of the map until players are sharing the screen with twelve or thirteen of their past incarnations.

As one might imagine, this creates some interesting gameplay choices. The more deadly a player chooses to be (like haphazardly firing rockets and swinging swords) the more likely she is to kill her target ghost before being killed herself, but it also makes the next round (and all subsequent rounds) even harder since there are more dangerous projectiles to dodge in the future. This layering of actions amplifies missteps and rewards good memory, but whether players go in guns-blazing or as careful assassins, things quickly become quite chaotic and exciting.

The only respite from the ever-increasing army of clones is the Exorcism weapon. Depicted as angel wings, it gives the player the ability to briefly surround himself with a heavenly glow, permanently exorcising all ghosts who fly into its area of effect. Careful players may be able to clear the course entirely, though clearing even just two or three feels rewarding, as it significantly lessens the threat in following rounds.

The visuals communicate important information to the player effectively, even through all of the chaos on screen, and manage to maintain an appealing haunted house aesthetic while doing it.

The multiplayer mode offers a two-to-four player deathmatch utilizing the game's tight controls and wide array of weaponry, but the ghost mechanic takes a backseat to a rather standard Towerfall-like style of arena combat. The winner of each round spawns a ghost, but with so many dangerous players on the screen already, this addition fails to add much to the strategy. Instead, it feels like it just adds clutter to the screen.

The multiplayer would have benefitted from additional game types that made more creative use of the ghost copies, such as a collaborative ghost-busting mode or something in the vein of the devilishly tricky and brilliant Cross the Line mode from Mimic Arena.

The same desire for more modes goes for the singleplayer as well. Though there is a challenge mode that encourages players to attempt busting ghosts under particular level conditions, it fails to feel as fresh and interesting as the arcade mode, and doesn't do a lot to expand upon the mechanics.

Overall, Extreme Exorcism is a tightly-designed and visually pleasing title that could stand to wring more content out of a clever and relatively under-explored central mechanic. Players who click with it will likely enjoy hours of maximizing scores and minimizing accidental deaths, but those not in love with the core mechanic aren't likely to be won over by this spooky shooter. Rating: 7.5 out of 10.


Disclosures: This game was obtained via publisher and reviewed on the Xbox One. Approximately 2 hours of play were devoted to the single-player mode, and the game was not completed. 1 hour of play was spent in multiplayer modes.

Parents: According to the ESRB, this game contains fantasy violence. A wide array of weaponry, both on the fantastical and realistic ends of the spectrum, are used, but it is very cartoony and does not give the feeling of real violence.

Deaf & Hard of Hearing: The game does not suffer from lack of sound. The important information is communicated visually.