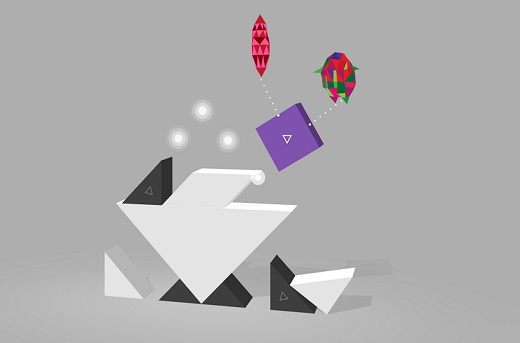 HIGH The game creates (and requires) a tremendous amount of teamwork.

LOW The physics are too slippery to build some of the tougher towers.

WTF The dreadful wind and rain.

I tend to be a fan of stacking games. Titles like Art of Balance, Boom Blox and Stack all put me in a specific headspace—there's something calming about focusing closely on blocks, carefully managing every little move and sliding everything just so to create a perfectly-balanced tower until the inevitable JENGA! happens and curse words ensue for minutes afterwards.

I call this genre "Zen frustration."

Dreii is another that fits into this category, and it has a simple premise: stack blocks to cover the goal.

The player can drag any edge of a shape to carefully place it on top of other blocks to reach the ever-higher goal point. Victory is achieved when the goal point is covered for three seconds. It sounds easy, right?

Well, it starts that way, but the difficulty ramps up quickly.

Before long, shapes become rounded and flat surfaces become scarce. Players are also tasked with building on platforms floating in water or with balancing precarious shapes against each other. Any wrong move could cause a tower to topple over, if players can even figure out the correct shape to build in the first place.

To mitigate the challenge, Dreii employs brilliant drop-in/drop-out multiplayer, silently connecting players to any other person (across any platform) currently on the same level.

Like the anonymous co-op in Journey, communication options are limited. Most of the meaningful communication must be done kinetically, through demonstration rather than explanation. This can be exciting and frustrating in equal measures. At times, it would be nice to verbalize the idea I was trying to concoct, but I did enjoy being forced to think of ways to show rather than tell.

Even though communication was limited, I did start to feel close to the players I was with. There was something reassuring about knowing that someone else was playing along with me, also stumped and frustrated by the same stacking puzzle in front of us. Seeing my comrade pick up the pieces and start rebuilding immediately after our tower fell was encouraging, and convinced me to stick with it long after I normally would have given up.

Getting back to the difficulty for a moment, some of the levels, even before the halfway point, were devilishly tough. I'm honestly not sure how I would have beaten them if I didn't have two other players along. Perhaps those particular levels would be somehow rearranged if only one player was active, but there's at least one puzzle that I'm quite convinced would be impossible without partners. This reliance on teamwork is the game's greatest strength and weakness.

On one hand, pitting multiple players against seemingly-impossible challenges necessitates a deep and dynamic level of teamwork. On the other, it makes me apprehensive about Dreii's longevity. It was fortunate that others were online when I was (and it greatly improved my experience!) but I imagine it will be almost impossible to find partners months or years down the road. Without help, it seems that solo players will likely be locked out of a majority of the content.

Another thing to consider is that it seems using a controller is not the optimal method of interaction. Dreii requires very precise manipulation of shapes, and that kind of precision can be difficult with a thumbstick, particularly when there's a sizable delay between input and movement on screen. The game would have benefitted from employing the PS4's touchpad for more precise movements, but, touch, tilt, and motion-tracking capabilities were not included. Even though I did not have the chance to try it out, I suspect the Wii U version to be the best version if it uses the touchscreen interface.

Overall, Dreii is an elegant, yet maddeningly difficult block-balancer. Though the challenge level is high, the flawless co-op makes it uniquely enjoyable when played with others. For those interested in giving it a try, I recommend getting in as soon as possible while the community is active—partners may become sparse in the future. Rating: 7 out of 10.

Parents: The game is rated E by the ESRB and contains nothing that should make parents take caution. Online interactions are tightly constricted (the most colorful word in the game's usable dictionary being "blimey"). Apart from the possibility of encountering a lewd username or a player building rude shapes from the blocks, I have no reservations against recommending this to (steady-handed) gamers of all ages.

Deaf & Hard of Hearing: All necessary information is communicated visually. The game does not suffer without audio accompaniment.

Remappable controls: No, this game's controls are not remappable.

Colorblind modes: There are no colorblind modes available in the options, though the game has high contrast colors and easy-to-detect shapes by default.