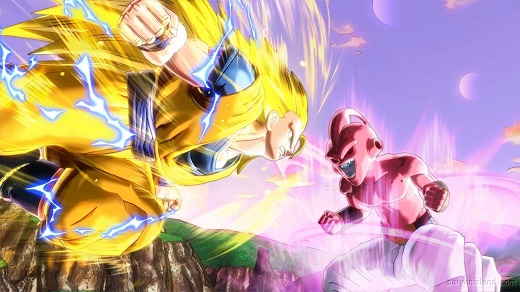 I have long been envious of those who have the skill, patience, time, and dedication to truly master fighting games. The level of strategy and dexterity exhibited by those at the yearly EVO tournaments always impresses, and the spectacle of stylized fighting dazzles.

What puts me off of playing, though, is the button memorization required at such a high level. Those mechanics require spending hours in training modes, honing muscle memory for elaborate input sequences and specializing in one or two characters, limiting my ability to experience the full depth that a fighter has to offer. As such, I've always wished for a fighting game that relied more upon momentum, spacing, and distribution of the fighter's weight rather than the quick and accurate input of complicated button combinations.

To varying degrees, some series have offered this compromise—Dead or Alive, Soul Calibur, Def Jam Icon, Super Smash Bros., and even Nidhogg, if you're willing to stretch the genre's definitions. However, when it comes to appreciation of flashy flourish with accessible control schemes, others have always recommended wrestling games and titles based on the Dragon Ball license.

I have never played a Dragon Ball game before, nor do I have any experience with the animated franchise. I came into the game blind, and it quickly became clear that the story and direction are geared heavily towards those who have extensive history and affection for the series. The characters were loud and angry, and I found them quite silly and annoying, but if you're reading this far into the review, then I'm sure you already have an opinion on whether or not Dragon Ball does anything for you.

Xenoverse plays like a cross between a traditional fighting game and a 3D brawler—a bit like a greatly-simplified Bayonetta or DmC, or the recent Naruto fighters.

Battles take place in immense, three-dimensional arenas such as cities, canyons, volcanoes, and so on. Characters run, fly, and swim around while locked on to one another, unleashing punches, kicks, energy blasts, and flashy special attacks. Battles can be one-on-one or fought in teams. 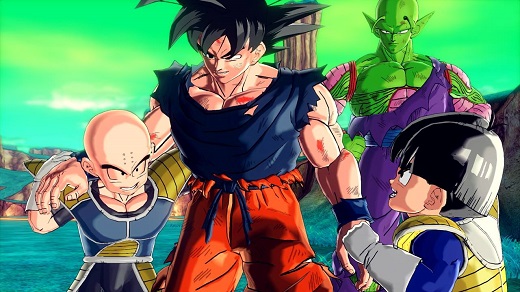 Fighters spend most of their time in flight, meaning that the vertical axis plays a central role in the movement and positioning of characters. Unfortunately, I had issues with the controls.

Regular movement in the air is a bit sluggish and slow to respond, which is frustrating when attempting to avoid attacks. On the other hand, the slow character speed is complemented by a useful (albeit unwieldy) boost which jets fighters in any direction at incredible speeds. As useful as the mechanic is, it's hugely unreliable, and failed to trigger at moments when I absolutely needed it, and I have no idea what factors into the failures.

Similarly, Xenoverse lacks a reliable dodge command, which would have been tremendously useful in avoiding what feel like cheap ranged shots. In its place is a teleport (which can break a fighter out of a certain number of hand-to-hand combos) and a block function, which is a few frames too slow to be entirely useful.

Attacks are fairly quick and responsive, but, with only light attack, heavy attack, and ranged attack buttons, moves are limited, and battles all end up feeling more or less the same. Although I do applaud the accessibility, it could benefit from a bit more depth to make characters feel fundamentally different from one another.

Controls aside, the meat of the game is story mode. Trunks and the other guardians of time have noticed several disturbances in their world, causing historical events to play out differently than they actually happened. This setup sends the player through a series of "what if" scenarios built around some of the anime's most pivotal moments, reframing moments in such a way that I assume fans will find quite exciting.

Outside of the story mode, though, there is little to be done.

There are individual missions that can be completed alone or with the assistance of other players online. Shops, story quests, and sidequests can be accessed through a large, central hub-world. The hub-world is colorful, aesthetically pleasing, and bustling with NPCs and other player characters, although movement and interaction are limited.

Oddly, the quick match mode allowing players to fight one-on-one via local multiplayer is buried deep within the story mode's hub, making it unnecessarily difficult to find, and I wouldn't have even found it had I not looked it up. The fact that local multiplayer can't be accessed from the main menu is quite strange.

So with all these issues, where are the game's strengths? In its presentation. Xenoverse looks incredible, perfectly emulating the anime look of the show. Characters are vibrantly modeled and full of life, and the environments are colorful and nice to look at.

Voice acting is authentic to the show, and by authentic I mean it's grating, with a script that sounds like it was written by twelve-year-olds playing with action figures. In fact, everyone yells their dialogue with such bravado, force, and sincerity that it makes our silent protagonist feel entirely out of place. In a world in which anything less than a full, guttural shout is not heard, a mute character stands out uncomfortably.

Dragon Ball Xenoverse is a game made by fans for fans, and the amount of love and dedication shown to the source material is palpable. The game looks great, sounds great, and the animation is silky-smooth. While the "what if" scenarios may pique the interest of fans, it will likely disappoint anyone looking for a deeper, richer experience. Rating: 6 out of 10.


Disclosures: This game was obtained via publisher and reviewed on the PS4. Approximately 6 hours of play were devoted to the single-player mode, and the game was not completed. No time was spent in multiplayer modes.

Parents: According to the ESRB, this game contains cartoon violence, mild blood, mild language, and mild suggestive themes. It seems to be fairly on-par with the anime, so fans of the television show shall not find anything new here. Violence is the core of the game, but it is cartoonishly over-the-top in scale and shows fairly minimal injury or death.