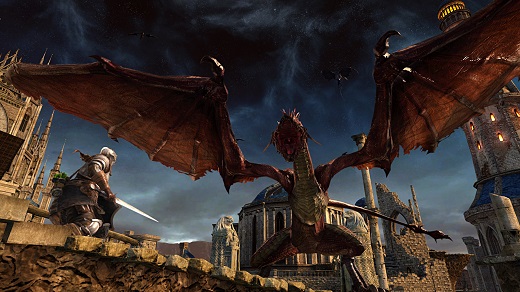 HIGH A silky-smooth framerate, and the added DLC areas are brilliant.

LOW The darkness is still not dark enough. Torches are irrelevant.

WTF Heide's Tower of Flame should be the last place a dragon wants to hang out.

If there's anything that can be said for the games in the Souls series developed by From Software, it's that each iteration has a personality all its own. Articles can (and have) been written detailing the first two, and when Dark Souls II was released, it was seen as providing an easier, more linear adventure than its famously difficult predecessors. As such, it drew ire from the hardcore contingent accustomed to a more taxing experience.

Though there are a myriad of small changes in the updated Scholar of the First Sin edition of DSII, the increased difficulty is primarily heralded—but the real question is just how much it changes the core experience for those who have already ventured into the lands of Drangleic.

Graphically, the game does not look immensely different in most areas, which makes sense since it's not a complete remaster. That said, small upgrades smooth out the aesthetic, and it's a noticeably polished-up version of this last-gen game. The art direction remains absolutely eye-popping, and the aesthetics do a great job of evoking many different moods.

So if the graphics are just a bit better, what is greatly improved? The framerate. Scholar of the First Sin runs at a silky-smooth 60 FPS, and it will be immediately noticeable to those who played vanilla Dark Souls II on console. Things are crisp and clear even in the middle of intense action, and the camera and combat controls feel more responsive than ever before. Scholar just feels great to play.

Technical performance aside, the aspect that returning players have been anticipating is the remixed content. In hopes of enticing fans who've been through the adventure already, From has changed enemy and item placement throughout the game, all with an increased emphasis on challenge. These changes are noticeable, but their effects are rather mixed.

Some areas, such as Heide's Tower of Flame and the Iron Keep, have become tougher thanks to the introduction of new enemies and the retooling of enemy behavior patterns. Other areas, such as the path to The Lost Sinner, have become easier by replacing hordes of overpowered (or just annoying!) enemies with fewer, but smarter fights.

Other tweaks are brilliant, like introducing the Shaded Wood's partially-invisible soldiers to the non-foggy areas—I jumped every time I saw the spirit of another player running through my world.

Some changes, though, are a bit puzzling. I can't suss the decision to litter the world with even more statues that require Fragrant Branches of Yore to unpetrify. These enemies seem to be scattered haphazardly, even as early as the tutorial area of the game. Similarly, a dragon now gates off the second boss in Heide's Tower of Flame, which is an odd choice, considering who that boss is.

While it's safe to say that the difficulty has gone up in Scholar, there are a few complaints players had about the original Dark Souls II that go annoyingly unaddressed.

For example, many of the game's dark areas still look like rubbish, and not nearly as dark as they should be. The choice between holding a protective shield or an illuminating torch would have been a fascinating mechanic to explore, and I was hoping that it would become a more vital component of the remake since the PS4's Bloodborne understands darkness so well. Similarly, the annoying and much-hated Shrine of Amana remains largely unchanged—in fact, From even increased the difficulty there.

Of special note is that the ‘Lost Crowns' trilogy of DLC areas are now included on-disc in this edition, and they're some of the highest points of the experience. Though locked away by difficult-to-find keys, these areas are brilliant and beautiful. They also offer the greater challenge and increased non-linearity that Dark Souls players had been asking for. Those who haven't yet been through these add-ons will find them well worth the time.

While a large number of areas remain untouched and the remixed enemy placement isn't exactly an all-new quest, Scholar of the First Sin is the best version of this game, and it remains an exceptional experience. For those who have not yet played Dark Souls II, or for those who skipped the DLC chapters, I whole-heartedly recommend this edition. Rating: 9 out of 10.


Disclosures: This game was obtained via publisher and reviewed on the PS4. Approximately 26 hours of play were devoted to the single-player mode, and the game was completed. 1 hour of play was spent in multiplayer modes.

Parents: According to the ESRB, this game contains blood and gore, mild language, partial nudity, and violence. Though the game is built around intense sword-fighting mechanics, blood, mutilation, and dismemberment are minimal. Parental discretion is advised, as grotesqueries are commonplace.

Deaf & Hard of Hearing: While the game remains playable without its audio, due, in part, to the effectiveness of the visual communication of its information, audio cues are used frequently. Those unable to detect such cues may have difficulty with certain portions.

Interesting review; I hadn’t planned to get this game, as I wasn’t impressed with it first time round, but in a moment of weakness after reading this review yesterday, I bought it. First impressions are, that if you make your peace with them making an already-cheap game cheaper, then it’s fine. I’m ok with it, though I hate to think what later areas are going to be like. It’s an interesting makeover to be sure, with the emphasis (seemingly) on providing a new gameplay challenge at the expense of…eh…verisimilitude and a natural progression through tougher enemy types. As such it’s… Read more »

My god, is dodging cumbersome after Bloodborne! It’s also very weird to be using a shield again, but with dodging this slow, it’s a necessary evil 🙂