Doesn't the title say it all? 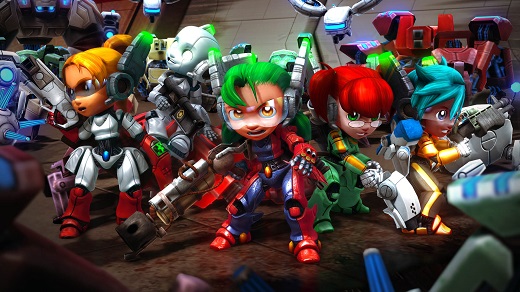 HIGH Barely surviving each level has never felt so good.

LOW The bosses are massive difficulty spikes on an already balls-hard game.

WTF An unlockable that changes the genre of the game. I love it!

Assault Android Cactus is a blazing fast, action-packed, bullet-hell arcade shoot 'em up that injects its simple premise with mechanical sophistication and personality.

The story follows a spry cyborg named Cactus who picks up a distress call from a nearby space station. It appears all of the robots on board have turned hostile and are threatening the ship's inhabitants, so it's up to Cactus and friends to clear the threat and return the station to working order.

Android's story is simple almost to the point of self-parody, but it harkens back to the type of setup that would precede the biggest, baddest, and most bombastic games in the arcades of the 80s and 90s. It doesn't let lengthy exposition get in the way of what it does best: shooting hordes of robots right in their cybernetic faces… And boy howdy, do the robots pour in.

From every wall, grate, and pit in the station, dozens of robots quickly fill the screen and will overwhelm Cactus and her friends if the player isn't quick. Controlling the space around Cactus and carving out paths of safe retreat is the highest priority, as one must always be on the move to outpace the legions of enemies.

Though each level is mercifully short, Android does an excellent job of constantly pushing the player to their limit while providing the explosive tools necessary to overcome tremendous odds in the glorious and dazzling fashion.

Each android is equipped with a different primary and alternate weapon, and there's an impressive range of guns on display. From screen-filling spread shots to close-range shotguns, to slower, more tactical single shot weapons, there are enough armaments to suit any preferred playstyle, and, what's more, the variety also gives each level tremendous replay value—each scenario will require immensely different tactics when approached with any of the ever-increasing loadout choices.

So the guns are interesting, and so is the way Android treats health. Failure is tied to a time limit which can be refilled with battery pickups. The player can die if they take enough hits, but the punishment is simply a break in momentum and time lost as the player has to repeatedly tap the fire button to recover. This gives the developers intimate control over the pacing of each level, as staggering the appearance of battery pickups turns some fights into down-to-the-wire brawls.

Unfortunately, this same system funnels players into one viable playstyle: aggressive and fast. It doesn't necessarily compliment every weapon loadout that the game makes available, and with a game this mechanically dynamic, it would be nice to have more elbow room to experiment with different strategies and combinations.

Assault Android Cactus supports local multiplayer, and even with the addition of another player causing chaos on screen, the game remains immensely readable. For those hoping to get a leg up by bringing in a second, third, or fourth player to assist with harder bosses, be aware that the difficulty scales up each additional player. It's never a cakewalk. For true masochists, there's even an unlockable option to scale the difficulty up even when playing alone.

Even with that ridiculous level of challenge aside, every chunk of Assault Android Cactus feels like it's almost more than I can do, and it feels great to overcome the challenges Witch Beam threw my way. For those who think they're up for the task, this one comes highly recommended. Rating: 8.5 out of 10

Disclosures: This game was obtained via publisher and reviewed on the PS4. Approximately five hours of play were devoted to the single-player mode, and the game was not completed. One hour of play was spent in multiplayer modes.

Parents: According to the ESRB, this game contains fantasy violence and mild language. Gunplay is center-stage in this game, but it's not very graphic or bloody—they're androids!

Deaf & Hard of Hearing: Though sound is not absolutely necessary, it can be easy to miss items in the chaos without their audio cues. Gamers with difficulty hearing may face more challenges.

Remappable controls: No, this game's controls are not remappable.

Colorblind modes: There are colorblind modes available in the options, though the color filters are not descriptively named, meaning colorblind gamers may have to experiment to find a usable option between the three offered by default.