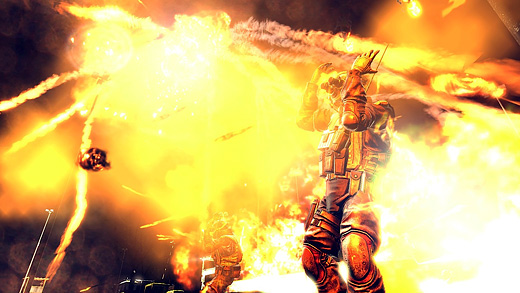 I found Homefront to be less than satisfactory. The review will give all the gory details, but the game did manage to stir one particular question in me, which I managed to fit into the review—where is gaming's Apocolypse Now? With so many films about war, why has there yet to be a game (that I've seen) that has the same impact on how we perceive it? Homefront wants to be that game, but it falls painfully short due to several fundamental problems with creating a true war game.

War sucks. I've fortunately never had to deal with it myself, but that appears to be the general consensus. Lots of people get killed/injured, resources are wasted, and infrastructure is destroyed. It's an all-around bad deal for most everyone involved. Over the years there have been several films that have portrayed this perspective successfully, but no games. Why? The games as art debate has certainly been decided in favor of the "yes they are" crowd, so games are definitely capable of having the same impact as a Full Metal Jacket.

Part of the problem is the inherent nature of games as opposed to film. Most games are all about empowering the player and mowing down the enemy regardless of the circumstances. Movies are different, in that there has to be characterization and a real story for them to be successful. Obviously there are films like Rambo or Die Hard or other cheesy action movies that actually are about a superpowered hero killing a ridiculous amount of bad guys, but film as a medium has been able to grow beyond that and show a deeper meaning to war and its repercussions. Games have not, largely because so many of them are centered around conquering the opposition.

I firmly believe that Homefront was the absolute wrong kind of game for what it was trying to portray. A modern FPS isn't the right genre to convey the kind of story that games need to make that next big step. Everything is about making the player feel powerful. He can shoot his way out of any situation, and never has to worry about suffering any of the horrors he sees around him. How is it possible to be scared, angry, or engaged in any way when I'm so much stronger than everything around me? Waves of enemies, tanks, helicopters, etc. None of them can even hope to stand up to me provided I know their weak points. This is obviously quite a bit different than reality. While suspension of reality is what most players (like me) look for in their games, a more accurate representation is needed for the true war game.

The first game that comes to my mind when I thought about this topic was Amnesia: The Dark Descent. The player is made to feel helpless throughout the entire game, and I think the war game could use some of that mood. Not necessarily for the whole game, but at least a portion could be dedicated to making the player understand that he's caught in a life or death situation. Then when he finally picks up a gun it has a lot more significance. He knows why he's fighting, or at least that he needs to take up arms to survive. Shooting one enemy suddenly carries a lot more weight than killing hundreds of them.

On top of just killing enemies that are out to get me, there's the associated moral ambiguity that comes with a combat situation. What does a person become capable of in that kind of scenario? There's a particular moment in Heavy Rain (when Ethan has to kill a stranger in order to get one of the clues) that sort of tackles this concept, but the protagonist has the altruistic motive of saving his son to back him up. A true war game has the opportunity to pose a question that would otherwise go unanswered—how far would I go to survive?

In Homefront, the enemy is mostly faceless. There is one enemy colonel that serves as a forgettable antagonist, but other than that the Koreans might as well be robots or zombies. There is no reason for me to fear them. Sure I'm constantly hearing about the horrible things they've done. Sometimes I'm even seeing them firsthand, but none of it matters. I'm invincible. I can die of course, but I'll just pop right back up at the last checkpoint. My death is nothing more than a small setback, and the enemy is just a roadblock.

Not empowering the player is the key here I think. A war game where I value my life, where death is something to be feared rather than a mere inconvenience, would be a tremendous step for games as art. Gaming is ready for that step, but it remains to be seen who will take it.