Maybe if I order you to aim better you'll stop missing 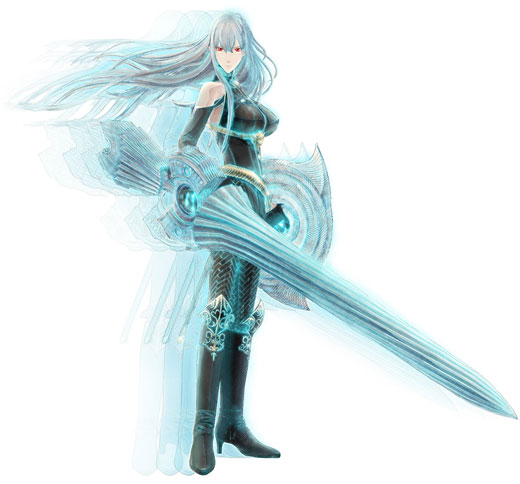 WTF Some inexplicable actions by the main character that I can't reveal without spoiling everything.

A unique and innovative system of combat. Inexplicable omissions from said combat system.  Some interesting and well-designed missions. Some stupid and pointlessly frustrating missions.  A great method of leveling and advancing your squad. A horrible method of upgrading and advancing your tanks. A setting of epic proportions. A group of main characters that are about as interesting as watching dried paint dry some more.  All of the above sentence fragments are adequate descriptors of Valkyria Chronicles, Sega's new PS3 exclusive tactical RPG. In my time with the game I had an experience that was at times engrossing and challenging, while at other times I was left completely bewildered as to why certain things were the way they were.

Valkyria Chronicles takes place in a fictional version of 1930s Europe. Due to its abundance of fuel resources the small, neutral nation of Gallia comes under attack from the East Europan Imperial Alliance. The player takes on the role of a small group of Gallians tasked with repelling the Imperial invasion. The backdrop for Valkyria Chronicles (from both a story and an artistic standpoint) is about as good as you'll find in any game, which is why it's maddening that I was given a set of main characters and a narrative that were so cliché and dull.

Without getting into too much spoilerific detail, I was disinterested in the lives and the actions of the characters for most of the game. There were a few moments that made me care about them and what would happen to them as the story progressed, but not often. There is little character advancement on the part of anyone, which is a real problem when there is such an abundance of dialogue. Most of the conversations devolve into overly cheesy diatribes peppered with some generic anime-style humor. The entire narrative felt like an enormous missed opportunity, as I think a slightly darker tone and some rounder characters would have made it a real winner. 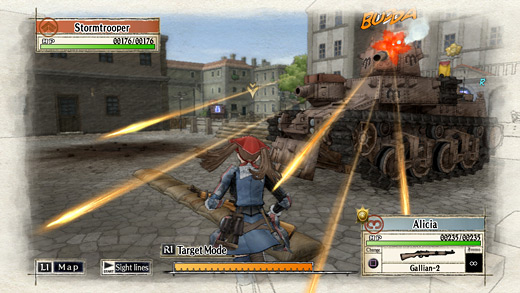 The game's artistic direction is absolutely gorgeous, as Sega's CANVAS engine flawlessly gives it the look of a moving watercolor painting with some nice pencil-sketch elements thrown in. While some of the environments could have stood a bit more detail, as the same field/desert combos time after time got a little old after a while, the character, weapon, and vehicle designs are excellent. Mix that in with a superb soundtrack and some great voice work, and we've got one hell of a presentation.

Combat in Valkyria Chronicles is a unique and engaging blend of turn-based strategy and third-person shooter action. Every turn, the player is given a set number of actions to use on their squad, and selecting a unit gives the player direct control over it in the third-person view, allowing me to have them attack, take cover, heal, or perform some other kind of action. The amount of planning that had to be put into each turn was incredibly deep, as every single action had to be thought of in terms of what my goals were, what defensive position my squad members would be left in, and anticipation of the enemy's actions in their half of the turn. The boss missions are where the game truly excels, as they forced me to plan around an enemy that could easily defeat any one of my units alone and usually had a near-endless supply of enemy soldiers backing them up. These levels were nothing short of exhilarating, as most of them (especially later in the game) were extremely difficult and required several trial-and-error attempts before I was able to form a strategy to beat them, leading to a great sense of satisfaction when I finally did.

While the boss missions are the game's pinnacle, the "stealth" missions represent the absolute bottom of the barrel.  In some levels I had to avoid a series of searchlights on my way to the objective, which felt extremely awkward and out of place in a game whose primary appeal is commanding tanks and a sizable group of infantry units. Having to maneuver my squad around some little lights seemed pointless (doing so with the tanks seemed especially absurd) and really hampered the fun. Thankfully there are only two levels that do this, which minimizes the damage to the overall experience. 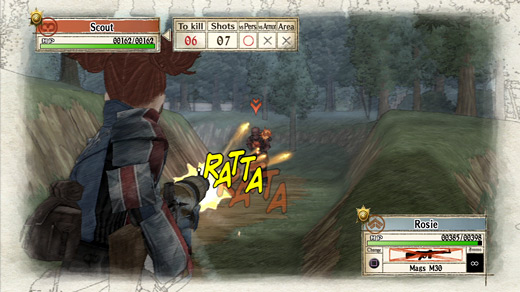 With all the thought that clearly went into the combat system's mechanics, it makes me wonder how its two most glaring flaws made it through to the final product. The game desperately needs some form of "undo selection" functionality for selecting units from the overhead map. There were countless times where my soldiers were grouped very closely together and I would accidentally select the wrong one, and with no way to go back I was forced to waste an action on a unit that I couldn't do anything with. The other major problem in combat is the lack of a "Restart Mission" option, which is absolutely essential when there is so much trial and error in completing the more difficult missions.

While gameplay within combat is smooth and engaging, navigating the game outside combat is like jogging through mud. Wearing metal boots. While blindfolded. The storybook style used for the main episode selection menu is gorgeous just like the rest of the game, but having to select the different tabs I want to view from a menu separate from the main menu defeats the purpose of tabs altogether. The method of leveling and upgrading my units/weapons was sound (thank the maker they didn't force me to level units individually), the ridiculous grid system behind making upgrades to my tanks and the added a layer of frustration where there certainly didn't need to be one. However, the inability to equip my units from the deployment screen before a mission begins was by far the most annoying aspect, and essentially kept me from changing most of my squad's weaponry. The only way to change weapons or other items is to exit the mission briefing screen, go back to the main menu, into the headquarters menu, and then to the squad barracks screen. Why there was no way to simply change from the mission briefing is beyond me.

The game looks fantastic, has a great story background, and features some incredible depth in gameplay—it's rare that such a blend of game types is applied so successfully. Valkyria Chronicles really feels like it should be great, but there are so many stumbles along the way regarding the out-of-game navigation, the writing, and some of the level designs it's as if they went to the trouble of preparing a gourmet three-course meal with all the trimmings and then put it in the middle of a garbage dump—I knew there was something good in there, but I had to step through a lot of crap to get it. I very much enjoyed this game, and the good elements definitely outweigh the bad, but I sincerely hope that a sequel gets produced someday, because with a few changes and some better writing this could be among my all-time favorites. Rating: 8.0 out of 10.

Disclosures: This game was obtained via retail purchase and reviewed on the PS3. Approximately 35 hours of play was devoted to single-player modes (completed 1 time). There are no multiplayer modes.

Parents: The ESRB has given this game a T (13+) rating for mild violence, suggestive themes, and minimal blood. There was nothing in the game that I would be uncomfortable exposing a child to.

Deaf & Hard of Hearing: All spoken lines are subtitled, and gameplay is not dependent on audio cues. Sometimes the individual units will say something when they discover an enemy, but there are enough visual cues to compensate if the player is hard of hearing.

Agreed that this definitely deserves a sequel. As I said, with a few tweaks and some better writing this could be on my all-time favorites list.

Nice accurate review and 8/10 is exactly the same score I’d give the game. Also nodded at the gourmet meal in a trash can comment; the game definitely has the attributes to be a superb offering, but just needs to sort some things out (hopefully for a sequel). “Valkyria is by far the best game i have played on the console and it’s a shame that games like Resistance, Killzone and LBP get all the marketing power behind them while VC practically none.” Yeah, completely agree. It’s games like this that need to sell since it displays a level of… Read more »

Little late on reviewing this old game, but Valkyrie Chronicle is one of the best if not best PS3 PRGs, but than again, with Tales of Vesperia out for PS3 now, that may change. I love the fact that this is a unique game though. I’m tired of playing cookie-cutter generic JRPGs.

I never really felt the need for a restart option, as I just kept 2 saves while playing to avoid any troubles. One before any battle to restart from and one at the beginning of every turn when fighting (in case I made a stupid mistake). I also didn’t find the stealth missions to be any big hassle, and was rather fond of the one where you’re leading the two main characters through the forest at night.

I agree about the like/dislikes-I never really paid attention to them either, and I didn’t really seem to suffer for it.

The stealth missions were more aggravating to me than anything else. They felt really ill-suited to the way I had to move my soldiers around.

It is an overall good game, but I found the numerous missteps really frustrating.

Valkyria is by far the best game i have played on the console and it’s a shame that games like Resistance, Killzone and LBP get all the marketing power behind them while VC practically none.

That said, i personally enjoyed the stealth missions due to the change of pace they offered.

My main criticism is that i found it hard to keep track of who liked who, especially as there are so many recruits to choose from.

Fantastic game though overall and would love to see some form of co-op in these kind of games.