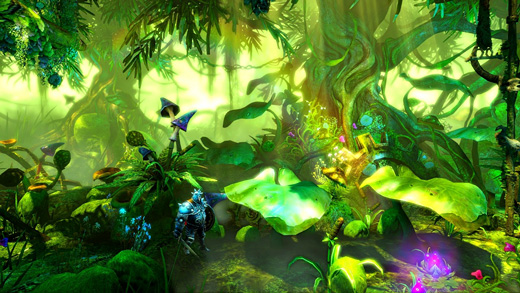 HIGH Switching between the wizard and the thief just in time to use the grappling hook and escape an area.

LOW Loading a save and spawning right in front of a giant spider.

WTF Solving a certain puzzle in a way I know I probably wasn't supposed to.

Fresh off the success of the original Trine, Finland-based developer Frozenbyte is back for more with Trine 2

. While it isn't appreciably different from the original, Trine 2 offers more of the same impeccable puzzle design and platforming action that's now come to be associated with the series.

As the name suggests, this 2D platformer follows the journey of three heroes—a strong knight, a cunning wizard, and an agile thief. Each character has his/her own role to play in the adventure, but the player can only use one of them at any given time, and thus must switch between them accordingly. For example, when needing to scale a high wall, the wizard can create blocks to climb on, or the thief can use her grappling hook. When trying to hit a tricky switch or plug a pesky fire stream, the wizard can manipulate parts of the environment to get past the obstacle. When fighting enemies or knocking down a weak-looking wall, the knight is your go-to guy. The switching mechanic is very fluid and lends itself well to the various traps and puzzles.

Speaking of puzzles, the ingenuity of the levels from the first game has been retained, and a few new gimmicks have been added….such as portals. Of the Portal variety. This is oddly appropriate since progression through a tough area gave me the same sense of gratification common in Valve's franchise, meaning that the "aha" moments of realizing the solution to a problem are incredibly fulfilling. I actually would not have been surprised if this were a Valve game, as the level of stage craftsmanship in Trine 2 measures up to Portal quite well.

From a visual standpoint, Trine 2 is gorgeous. In addition to the crispness of the environments from the first game, things are a little bit more varied this time around. Starting in a dense forest, I was eventually treated to a dark castle, a sunny beach at dawn, a frozen cavern, and more. The first game suffered from a feeling of staleness since the setting never appreciably changed, but that's been more than addressed here. Trine 2 features quality artistic depth to go along with the equally excellent levels.

In addition to the pretty new environments, enemy encounters have received a tune-up as well. The various goblins and spiders are much more nimble and entertaining than the enemies in the first game, though the fights themselves often feel like nothing more than efforts to justify inclusion of the Knight. Most enemies can be taken down with concentrated slashing from the Knight's sword, with very few exceptions. While I had a lot of fun devising solutions to puzzles using the Thief and the Wizard, the Knight's gameplay portions are simple button mashing affairs that don't quite live up to the rest of the game.

The original Trine was an excellent title, but Trine 2

has re-established Frozenbyte's well-earned reputation for quality. A steal at $15, Trine 2 is worthwhile investment for any puzzle-oriented players looking for something to sink their teeth into. Rating: 8.0 out of 10.


Disclosures: This game was obtained via publisher and reviewed on the PC. Approximately 6 hours of play was devoted to single-player modes (completed 1 time) and no time in multiplayer modes.

Parents: According to the ESRB, this game contains animated blood and fantasy violence. Nothing to worry about here folks—it's totally kid friendly, though some of the monsters might frighten the littler ones.

Deaf & Hard of Hearing: If you get stuck for too long in a given area, the characters will say a hint of some kind, and these spoken hints are not subtitled. Other than that there shouldn't be any major problems.

I was very excited by the demo so I bought it on steam. Past the first 2 hours I was pretty much bored to tears. Maybe it was the story, or the repetition, or even my sisters whom I was playing it with. I’ll try to play it once again solo to see if the experience is different.