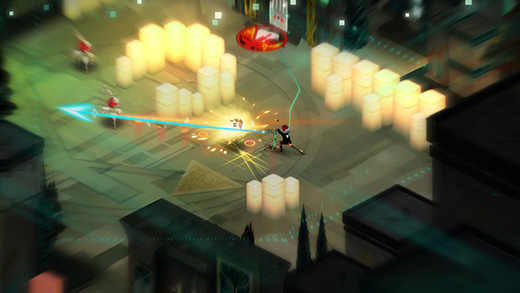 HIGH Imagining Red unleashing a furious battle cry as she fires six Sparks to finish off the Spine.

LOW Being spawned right on top of an invisible enemy.

My memories of catchy level, character, and boss themes far outweigh any "normal" music stored in my mind. Whereas most people probably have the lyrics to all their favorite songs at least partially memorized, I can hum the Elec Man theme or Corridors of Time on command. For me, game music is the ultimate ear worm.

Transistor, the latest title from Bastion developer Supergiant, is like a piece of game music itself. The game flows in a way that leaves bits and pieces of it in one's mind like parts of a catchy tune, which is appropriate since we spend a lot of time recovering fragments of the minds of people lost to the game's enemies. Sound effects for various actions stick around like a prominent chorus, and even the individual environments/animations themselves are very memorable.

The player assumes the role of Red, a prominent singer in the city of Cloudbank. The city has been invaded by a mysterious robotic enemy known only as The Process. After the initial outbreak, Red loses her voice and awakens next to a dead man impaled with a talking sword. The weapon identifies itself as the Transistor, and Red takes the sword up with the hopes of stopping the Process and whoever is behind it.

Much like the notable narrator in Bastion, the world and the Transistor itself are the primary methods of storytelling. However, instead of being a detached entity, the sword is Red's companion and develops a strong camaraderie with her as they explore the Process-ridden world. The Transistor gives more play-by-play commentary than players got in Bastion, and its lines often mirrored what I was thinking, while never feeling intrusive.

While the Transistor is beautifully voiced and written, the idea of such a touching relationship developing when one of the participants is mute rang a bit untrue. Red communicates through text in a few instances and has expressive animations, but it really does feel like her input is missing. She doesn't necessarily need to speak (which would rob the game of a key thematic element) but more input from her in some fashion would have been welcome. I'm firmly against silent protagonists in games, and Transistor is no exception.

Gameplay consists of an interesting mix between isometric Diablo-style combat and turn-based strategy. Red can use one of four powers in real time, or she can enter turn mode—time freezes and she can plan out her next actions. However, Red can't use any offensive abilities for a short period after her turn ends, forcing one to be cautiously strategic when using it.

In addition, Red has many different sets of abilities and upgrades that give the player many possible builds to work with. Each new ability can be used as an active primary action, used as an upgrade for an existing action, or be used in a passive slot to gain things like health regeneration or more actions per turn. All manner of playstyles are supported, making the game extremely adaptable to personal preference. This makes for some deep and challenging combat, so there's definitely a lot going on underneath all that gorgeous artwork.

Oh, and that gorgeous artwork? It really is gorgeous. Along with the soundtrack, Transistor's aesthetics deserve every bit of credit that's been given to them. In fact, Cloudbank's beauty is a key factor in understanding the story and the destruction being wrought by the Process.

A deep, unnerving sadness took hold as I watched the Process slowly drain all the life and vigor out of the world. This is particularly evident during a late-game segment that goes back through one of the starting areas. The vibrant city has now been changed into a white void, with all of its charm gone. Red's wonderful singing voice (heard in a few of the background songs) was just the Process's first victim.

While I wasn't the biggest Bastion fan, Supergiant had definitely stepped things up with Transistor. Deep, stylish, fulfilling and concise, Transistor can easily be described in terms used for music rather than games—And like a great song, it stays in one's head long after the credits roll. Rating: 8.5 out of 10


Disclosures: This game was obtained via publisher and reviewed on the PC. Approximately 6 hours of play was devoted to completing the game once. There are no multiplayer modes.

Parents: According to the ESRB, this game contains violence and mild language. I saw nothing really objectionable, so I wouldn't have any qualms about letting a child younger than 13 play this.

Deaf & Hard of Hearing: Despite being so heavily related to music, this really shouldn't be much of a problem. All spoken lines can be subtitled and gameplay doesn't use audio cues.