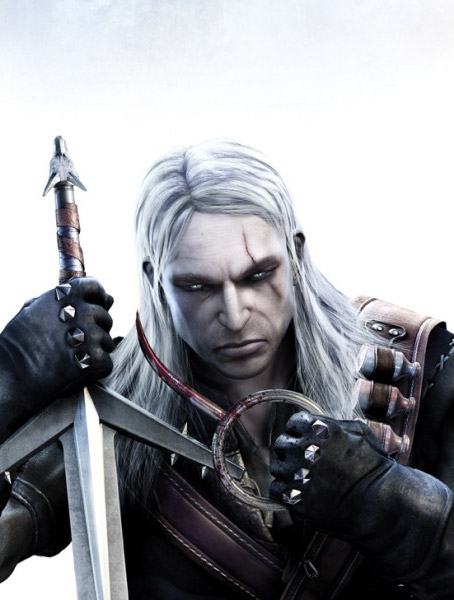 Whenever I play a time consuming game like The Witcher, a third-person RPG from CD Projekt Red, there is always a point where I know whether or not I'm going to finish it. You know, the point where you either know you're hooked or know you're done with it? The sooner that point arrives the better, since my time can then be spent erecting those ever-needed dispensers if the game in question doesn't work out. The moment doesn't necessarily need to be a particularly powerful spot in the game, just something that ramps up my intrigue. In the original Star Wars: Knights of the Old Republic, the intrigue point (as I'll call it) was the moment Darth Malak ordered the obliteration of Telos. In Mass Effect it was confronting Saren in front of the Council. Oblivion? Getting my first kill as a member of the Dark Brotherhood. Chrono Trigger? Seeing the future for the first time.

In The Witcher, this moment seemed to be when I found that a choice I made in the game's first chapter led to the death of a NPC about eight game hours later. This person was also the focal point for a quest, which made the choice all the more significant. This was sort of a Spider-Man moment, where I realized I could have prevented his death (and kept my quest intact) had I stopped his would-be killers earlier when I had the chance.

There are also times when there are moments that make me realize that I won't be finishing the game. In Final Fantasy XII, this was when I found that my characters only leveled up when I used them in combat. In inFamous it was when my first "choice" popped up. And in The Witcher, this moment was twofold—once when I noticed that conversation trees kept abruptly ending without giving me the option to go back and explore the rest of the options, and also when I noticed I couldn't go over a freaking fence after the opening cutscene showed my character jumping off of rooftops. The Witcher is unique in that it had both an intrigue point and a disinterest point (again, as I'll call it), but I doubt I will be finishing this game regardless.

I'm playing The Witcher in response to an article I wrote concerning the nature of moral choice systems in games. Many of the commenters told me that The Witcher had the sort of fit-the-situation choices (as opposed to moral choices) that I was describing, and so far this appears to be accurate. I can be a scoundrel or a saint whenever it suits me without having to worry about a karma rating or anything like that. I also can't atone for murdering an entire village by doing enough good deeds to erase it—I have to live with those actions for the entire game. Choices have consequences and I have to deal with the outcome, no matter how far-reaching it may be. Now for the bad news… 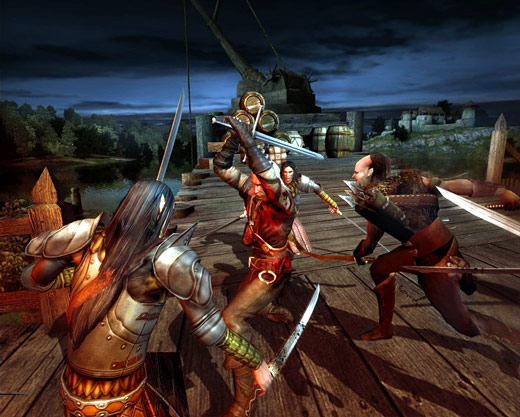 The Witcher has lots of annoying problems that keep it from being a top-tier game for me. First and foremost, conversations with NPCs are handled rather sloppily, which is a huge problem considering I spend a large chunk of the game taking part in them. Many times when I finished a a part of a particular dialogue tree  the conversation would just end instead of giving me the option to go back and select the other options. Many NPCs have lots of different talking paths to traverse, so this got annoying very quickly. Conversation trees are a mechanic that was essentially perfected a long time ago, and for a game like this to handle them so poorly is simply inexcusable.

There is also no jumping ability, which is something I find mind-boggling. Now granted, I understand that in real life if I wanted to get to a building on the street level below me I would find the stairs and walk down. In a game like this however, I want to find the quickest possible path between A and B. Several of the levels have areas that could be easily reached by simply hopping a fence or jumping off a low bridge, but instead I have to walk allllllllllll the way around that fence, or find the staircase that allows me to go down instead of just being able to jump down. While it seems a minor problem at first, it gets steadily more annoying as the game goes on. I get that they're trying to make it more realistic so I can't just hop through the entire town, but sacrificing player convenience for realism in this case is unwarranted.

The game's narrative is based on a fairly extensive fantasy series that has spawned several books, a movie, a television show, and a full-length comic novel. Based on parts of Polish and Slavic mythology, Witchers are magically-enhanced warriors that make a living out of slaying monsters and other unsavory characters for money. The story of The Witcher follows one such Witcher, Geralt of Rivia. The opening of the game is kind of a chore, as it took almost a full chapter before I really felt connected to the story in any way. And even after that it still feels like an extremely generic fantasy setting (magic, dwarves, elves, etc.) without many distinguishing features. Things might be more palatable for fans of the series, but I found myself stumbling through quite a bit.

The voice acting in The Witcher is absolutely atrocious. Geralt's voice sounds straight out of some cheesy 80s cop movie, complete with unnatural growling and total lack of inflection. Again the opening is particularly bad in this case, as almost all the voices I encountered were having the same monotone lack of expression. Some of the supplemental voices did get better as I went on, but even then Geralt's rasping is present in every single conversation, and the game as a whole suffers for it. There is also a distinct lack of variety in character models for NPCs. Many of the models even have the exact same outfits of the exact same color, so I always buy herbs from the same fat guy wearing the same weird bell thing around his neck, and all hookers everywhere wear the same trashy off-one-shoulder outfit. Making different models for each and every NPC in the game would indeed be impossible, but is it too much to ask for maybe a little variation in clothing just to help keep the immersion going?

CD Projekt Red has a good foundation here. They approached choices in a way I haven't really seen before, and they deserve praise for that. Other gameplay elements like combat and alchemy are also smooth ventures. However, my desire to see how my decisions will play out is the The Witcher's sole redeeming factor. The intrigue point was just barely intriguing enough to keep my attention above all the problems. The Witcher has a solid core going for it but there are too many basic tenets of RPGs that it just gets flat-out wrong. Without the decision system, I'd be ready to toss this one in a heartbeat. Rating: 5.0 out of 10.

Disclosures: This game was acquired via Steam purchase. Approximately 16 hours have been spent in the single-player mode on normal difficulty, and the game was not completed at the time of review. There are no multiplayer modes.

Parents: According to the ESRB, this game contains blood and gore, partial nudity, strong language, strong sexual content, violence. While it isn't really a gorefest, the game's portrayal of women and some of the monsters probably aren't good for small children.

Deaf & Hard of Hearing: All spoken lines are subtitled and there are no significant audio cues.

How can you properly rate a game if you know you are not going to finish it? There may be redeeming qualitys later on in the game you miss if you don’t play all the way threw.

I have to admit I didn’t play witcher long enough to see the choices system come to full effect. I was put down by the combat system and quests that reminded me too much of world of warcraft. Especially the latter was at that time a downer for me.

I actually felt that it was fairly innovative as far as choices went, it just failed at most everything else. No amount of innovation is going to save it if the basics aren’t taken care of.

[quote=Crofto]I think it is unfortunate, and somewhat unfair, that you fail to highlight key areas where The Witcher would appeal (and appeal it certainly does, especially with longterm PC RPG players who feel shunned by the dumbed down attitude of most RPG developers such as Bethesda and Bio-Ware). By all means, highlight the flaws too, but make sure to highlight the ones that matter and keep a balance going.[/quote] I think I can be called longterm PC RPG player, but the Witcher totally failed to interest me or keep me interested for that matter. Yes, it’s all a bit darker… Read more »

[quote=Crofto]Firstly, I thought it was common practice to actually finish a game before posting a review? Unless the game is unbelievably bad, or broken, a reviewer should make sure to complete the game in order to offer a fair and balanced view on the whole experience — this isn’t the case, it seems.[/quote] There’s nothing wrong with writing a review before finishing the game if you can formulate an opinion on it before completing it. You do have to take some time and give it a chance, but in a 50-60 hour game very, very rarely will something 40 hours… Read more »

Unfortunately, I think this review has pulled down this website’s image and purpose for me to a small extent. Firstly, I thought it was common practice to actually finish a game before posting a review? Unless the game is unbelievably bad, or broken, a reviewer should make sure to complete the game in order to offer a fair and balanced view on the whole experience — this isn’t the case, it seems. Secondly, the two flaws you mainly highlight here (not being able to move over obstacles and poor conversation trees) are somewhat minor on the grand scale of things.… Read more »

I do actually mention combat in the final paragraph, but I didn’t think it was noteworthy enough to merit more than a passing reference. It works, it’s playable, and there’s not really anything else to be said.

We try to avoid laundry-list style mentioning of every single aspect of a game in reviews, instead focusing on the parts that stand out, be they good or bad. To me the combat just wasn’t worth spending more than half a sentence on.

I find that most of your criticisms to be fair and that you’ve highlighted areas of the game that, with the proper attention, could change the game completely. I am, however, a little surprised to find no mention of game-play in your review. It’s as though you decided combat wasn’t a major feature of the game and instead decided to discuss the problems with the dialog trees. Conversations, yes, are a big part of The Witcher, but I doubt many gamers who read your review would have any understanding whatsoever of the game’s combat systems if they hadn’t already been… Read more »