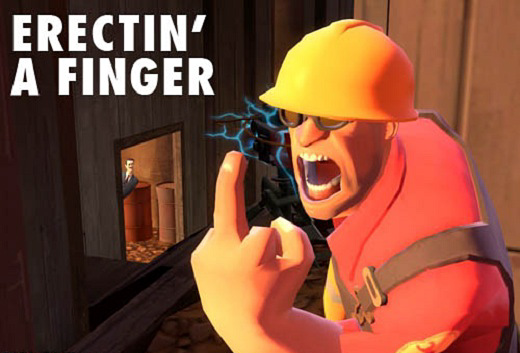 So it comes to this. The engineer, my favorite Team Fortress 2 class, the one in which I saw a need for some additional items before the medic update even came out, the one that I have almost 130 hours of playtime with, will be the last to get an update. I'm not mad. Really….I'm not.

Kidding aside, it does make sense, since adapting the engineer to all of the other class updates seems more practical than the other way around. A lot of what happens in any given match is dependent on engie building placement and usage. Teams can be made by engies who know the map and know how best to place structures and hold a position, or they can be broken by sadistic fucks with too much time on their hands. Anywho, this is probably the most sensible way to go about things, even if it does make me wait a little bit longer for all my cool new toys.

The latest update deals with the soldier and demoman, two classes that are firmly in the bottom of my hours played list. Not that they're bad mind you, but I'm horrible at sticky jumping and rocket aim is not one of my strong suits. They each have three new implements of destruction (four for the soldier by virtue of winning the war contest) so let's see how they stack up. Click the links for a full description of each item.

The Direct Hit – This is devastating in the hands of players who have mastered their rocket aim, but if you're like me you'll likely be sticking with the old standby and taking the splash kills by the truckload.

The Equalizer – I can sense a change for this coming in the future. This makes engaging soldiers in close-quarters combat a risky proposition, as when their health gets low it's likely they'll be able to nail you for 100+ damage in one swing. This can be really frustrating when something like a pyro gets the drop on an unsuspecting soldier only to get a pickaxe lodged in his gas mask. I have a feeling that either the damage or the speed boost will be reduced or taken away eventually.

The Buff Banner – Ever wanted to just kritzkreig the entire team at once? While this might seem overpowered at first, the soldier has to do a large amount of damage to get the rage meter full, and thus must put himself at considerable risk to do so. It also replaces the shotgun, so it makes the player's skill with rockets all the more important. Again, in the hands of a skilled soldier this is extremely powerful.

The Gunboats – Meh. It does enable tons of rocket jumping while taking very little damage, but at the cost of the shotgun and/or the buff banner. To me the tradeoff just isn't worth it. This seems like it would have been a lot more useful to the demo, but it depends on what it would have replaced.

The Eyelander & The Chargin' Targe – They're essentially useless by themselves. The targe provides some nice protection against fire and blast damage (side WTF-how does a wooden shield protect against fire?) but it isn't worth losing the sticky launcher. The eyelander has some nice added range, but the health penalty isn't worth taking without the shield to use it with. Together they can be quite powerful, but the most interesting thing here is how this makes the demo not really a demo anymore. Some players seem to like the offensive grenade spamming/melee attack combo that this brings, but to me a demo without his stickies (insert bad joke here) is half a demo.

The Scottish Resistance – In theory, this is my favorite item in this update. The ability to lay twice as many stickies and the selectively detonate them sounds great, but losing the ability to blow them up from anywhere will take some getting used to, plus it's still kind of weird having to look at the right group to make them explode. The jury's still out on this one.

Finally, I have to say that Valve has some great comedic writers on their payroll. Saxton Hale is undoubtedly the best game character ever created who has absolutely nothing to do with the game, and each update is usually good for a few chuckles. This goes to show what going the extra mile with writers can do. Thanks to that and great art direction Team Fortress 2 has gained something that makes it unique among multiplayer FPSs-personality.

Anyway, there's nothing much else to report. The achievements all seem reasonable, as Valve appears to have learned their lesson from the medic update. What say all of you? Has Valve answered the bell for your preferred class?

The mini-update was very much welcome, especially for the teleporters. I can’t recall if it was the first update or later down the line, but adding the ability to repair both parts of the teleporter from either end made things a lot better-teleporter entrances had been sitting ducks for spies with the cloak and dagger.

Ultimately the engie has needs some kind of defensive structure to replace the teleporter, since they’re pretty useless when defending the last point of maps like dustbowl. I’m thinking something along the lines of the bubble shield from Halo 3, but who knows.

I guess you can’t call it a major update, but the engineer did receive something of an update when they allowed him to upgrade the dispensers and teleporters past the first level.

For what it’s worth, he’s my most played type of character, too. Not sure I have 130 hours logged, but it’s up there.