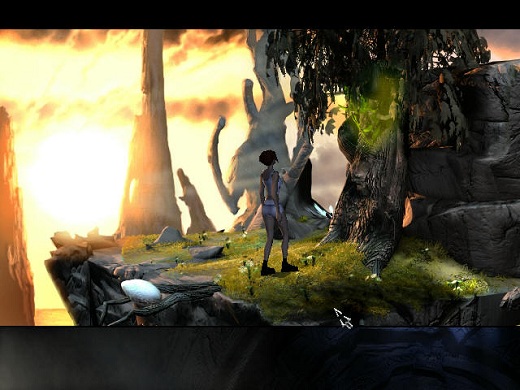 Finished The Longest Journey last night, and it was fantastic, if not a bit awkward at times. The "battles" are strange in that since I can't fail, I can stand completely still and do nothing while the monster just looks at me and waves its arms. I'm aware that Dreamfall has a combat mechanic but my friends tell me that it isn't very well done. I'm curious if something akin to Shadow of the Colossus (which I haven't played) or the new Prince of Persia would work here—it seems like several, grand, epic battles interspersed between the adventuring would feel natural and wouldn't break the flow of the game, but they'd have to learn from Prince of Persia's mistake and make the battles actually memorable instead of carbon-copies of each other.

Valve recently announced that they'd be taking away all items acquired through the use of a third-party idler program for Team Fortress 2. I can't say I'm surprised at this, as Valve has cracked down on external applications and other exploits before, but this really underscores the fact that the random item drop system was released well before it was ready. Having no way to work towards the items you want is a huge problem even if they are just the insignificant hats, and is something that should have been addressed before the system was implemented.

I've been mulling buying an Xbox 360 for some time now, and the price drop only helps its case. My main motivation for this was Mass Effect 2, but the fact that it will be released on the PC and the 360 simultaneously (or at least within a short timespan of one another) has given me pause. However, I am actually curious about Halo 3: ODST to see if all the problems with Halo 3's campaign have been fixed, and a lot of the Xbox Arcade titles are appealing as well. I reallllly wish the PS3 Slim had PS2 compatibility so I could play things like the aforementioned Shadow of the Colossus, but for now I have no interest in replacing my current one. I'm very disappointed that PS2 compatibility wasn't included in the new model, even if it did mean a higher price.

I’m in the unfortunate position of having a PS2 that went kaput some time ago, and I don’t really want to buy a new one to play just one game. I’m hoping for a PSN release or something, but it’s doubtful.

“I’m very disappointed that PS2 compatibility wasn’t included in the new model, even if it did mean a higher price.”

The PS3 slim is extremely impressive and I am even planning on trading my old PS3 in to purchase the new model, however, the main, and only, flaw is the lack of backwards compatibility.

I really don’t want to have to hang onto my PS2 forever.