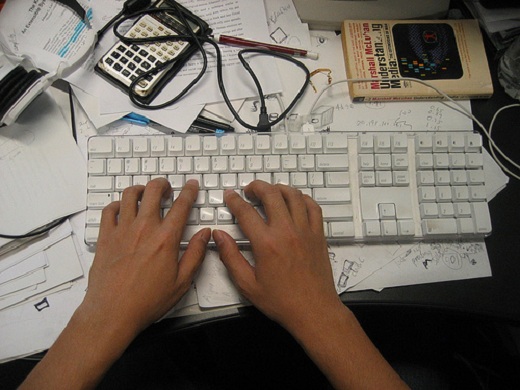 I've been asked on more than one occasion about how I approach the review writing process and what I like to see in reviews. I never have a firm answer, which is kind of unsettling to me since I frequently engage in discussions on the Twitter and such about what reviews should and should not be. There is no one answer to that question, but it does get me thinking about about the half-cocked ramblings I regularly try to pass off as game journalism.

As a result, I've taken note of a lot of my own habits since I began writing for GameCritics. I tend to approach my reviews (and anything I write really) in a specific way, and that approach is what I look for when responding to the user submissions on the forum or giving anyone else advice when asked. I want to stress that this is not meant to be a guide to getting reviews posted on the site or anything like that. This is only me talking about what goes through my head when I try to turn "HOLY SHIT THIS IS AWESOME" or "THIS IS REALLY DUMB" into an at least somewhat coherent combination of words. Every writer has their own style and their own voice. Above everything else, any aspiring reviewer should do what feels natural to them, because that is how you will best get your points across. However, I have come up with a few points that have helped me tremendously, and I hope they'll help others as well.

I mention these together because while they might be totally different in purpose, they are usually the last parts of a review I write, and often the most difficult. Most importantly, openings should contain information about the context in which this game should be viewed. Things like previous games in a series or a particular concept the game is trying to tackle are mentioned here, and maybe some of the things it's trying to accomplish. Saying the game "is a third-person platformer from GameMaker Studios" isn't enough. Is it part of a series? Does it expand on any particular type of gameplay? Is the developer trying to accomplish anything significant here? Questions like these need to be brought up (but not answered) in the opening.

The closing segment, naturally, is where these questions should be answered. I believe that closings should be blunt, as the reader has seen you dissect every relevant piece of the game in detail by now. After reading the last paragraph there should be no ambiguity whatsoever as to what you thought about the game. If a game is a piece of trash, call it a piece of trash. Also, be careful not to contradict anything you've said previously, like throwing "despite all the problems, it's still a good game" in at the end without discussing why it's a good game.

I hate it when reviews of any kind try to give me even a partial plot synopsis, and for two reasons. The first being that reading plot description makes a review feel artificial and emotionless. The review shouldn't be a summary of what happened in the game's story, but rather a description of the story and how you felt it impacted the game. Any more than the absolute barest necessity makes it feel like the writer is trying to artificially extend the length of the piece, which frankly is insulting to the reader. Don't shy away from talking about the story if you think it's important, but keep it as detail-free as possible. For example, describing a certain character (like the protagonist) is fine, but stop short of talking about specific plot developments.

The second reason I hate reading plot summaries? Spoilers. For the love of the Maker, spoilers. Be it about games, books, movies, bake sales, whatever, the specific content of the story is something I want to find out for myself. I don't believe that putting spoilers is ever necessary, and reading them always makes me angry. I remember way back in the good ol' days of the 90s, back when VHS was all the rage. My mother had ordered the first few seasons of Star Trek: The Next Generation on tape, and on the back of each box was a near-total plot summary of each of the episodes on that tape. Encounter at Farpoint's box even had the gall to tell me its whole damn story. It was incredibly disappointing-the revelation of the two-parter's ending was stolen from me, and from then on I've waged a Batman-like crusade against spoilers, complete with cape and cowl.

Speaking of emotion, a lot of reviews I read are filled with passionless fluff that reads more like a consumer guide than an opinion piece. I think a lot of reviewers use this method to make the article as objective as possible, but I say fuck that. Total objectivity is a sham, especially when it comes to evaluating a creative work. I know that regardless of whether the game was good or bad, it made you feel something, and I like seeing that in reviews. If it appears that the author is passionate about a particular topic, that lends more credibility to the review.

If you have some personal story regarding what you're reviewing, by all means include it assuming it doesn't take a whole page to tell or take you tremendously off topic. Personal anecdotes help give the reader insight as to where you're coming from, and shows that you care about the topic at hand. All too often reviews sound a bit too much like term papers or something you'd read in an instruction manual, and any insight or experience on the author's part can help lighten the mood.

While passion about a topic can certainly help, a good writer has to be able to keep those passions in check in order to put forth a reasoned opinion. It's easy to fall into the trap of rambling on about the minute details of whatever you're reviewing, and while demonstrating that you're a fan is important, excessive gushing gets in the way of any criticism you might have and makes your writing harder to read. Being a fanboy/girl is just fine, but you have to be a literate one if I'm going to explore the depths of your passion for a topic I know nothing about.

While it might be derided as immature or unprofessional in many settings, some well placed curse words can really help add impact to a particular point. However, using too much profanity lessens the effect it can have within a particular article. For example, if I fucking use a shitload of goddamn curses throughout an entire goddamn piece, it can be a fucking pain in the ass to read, and when I try to use those piece of shit curses later on, they aren't as fucking powerful. See? While final determination is up to the editorial standards of whoever you're writing for, don't be afraid to whip out the curses every now and then. After all, when it comes to hammering a message home, there's nothing quite like a good fuck.

Obviously there is no golden standard when it comes to reviews of any sort. As I said, every writer has his/her unique voice, and that voice should come out as unabated by rules as possible. These things have helped me discover my voice, and they're also parts of review writing that I routinely struggle with. Finding your flaws and emphasizing that unique voice is only the first part-now you have to convince people to listen.

Thanks a lot for those tips, you made my day, and it’s really appreciated!