When is a remake not a remake? 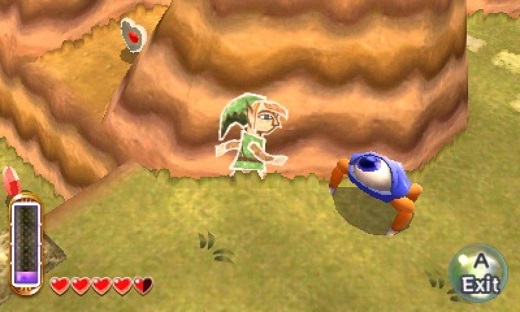 HIGH I AM LINK, LORD OF SAND *uses sand rod*

I love having Zelda debates. Listening to someone explain why they love their favorite entry in the series usually reveals a lot about them, as almost any gamer from any walk of life will have some sort of opinion on the subject.

Of course there is no 100% correct answer as to which Zelda is the best, but the SNES classic Link To The Past is unquestionably the spiritual core of the series, and when someone tells me that it's their favorite, I can tell they have a specific fondness for the 16 bit era. To use an obvious cliché, they just don't make them like they used to. Every Zelda that came after emulates it in some way, and even more than 20 years later, it still shines brightly while many others from the era have shown their age.

was announced. My initial thought was that Nintendo had finally resorted to a 3D remake after running out of ideas and a steady decline in the series' quality. I made a similar assumption of Nintendo's laziness with Super Mario Galaxy 2, and fortunately Link Between Worlds has proven me just as wrong now as I was then. While the finished product does indeed track very closely to Link to the Past, it does so while simultaneously feeling like a new game in many ways. It's an impressive feat.

Things begin as most Zeldas do: Link comes from humble origins, a crisis grips Hyrule, and our hero must take up the Master Sword, trek through various dungeons, and save the day. While Link Between Worlds doesn't do anything special with its story, it does manage to end on a particularly touching note, akin to the series' N64 glory days in Ocarina of Time and Majora's Mask. It's a small detail, but it left me satisfied after the game was finished.

Mechanically, there have been several tweaks to the standard formula that help things go much more smoothly than they have in the past. In fact, Link Between Worlds is one of the most respectful games I've ever seen when it comes to the player's time.

First, almost every major item is available from the beginning via rental from Ravio, the charming merchant who sets up shop in Link's house. In contrast to the "go to dungeon, get item" progression system used in the rest of the series, this leads to an almost Mega Man-like sense of freedom to complete dungeons in the order of the player's preference, and the game is very forthright about whether or not a given dungeon can be completed. If one has the required item, the dungeon is accessible.

Second, all items now use Link's regenerating magic meter to work, as opposed to items like the bow or bombs that required ammo in the past. This eliminates all the annoying ammo hunts when just one bomb or just one arrow was needed to complete a given objective. Again, the player's time is treated with  care here.

Link Between Worlds also features the single best use of the 3DS' 3D feature I've seen to date. While the game is viewed from a slightly tilted top-down perspective, multiple levels both above and below Link can be seen with the 3D on, and spatial features like elevation and depth can be used in ways they couldn't be back on the SNES. This results in a very cool take on old level designs that manages to capture the essence of some classic 16-bit dungeons while still feeling fresh at the same time.

Sadly, I am among those who simply can't look at the 3D screen for long without experiencing physical pain. This is a problem, since there are a few instances where I couldn't tell the difference between elevations with the 3D off, causing me to miss some puzzle solutions until I turned it on. It didn't happen all that often, and the game is certainly playable with the 3D off, so I can't come down too harshly on it. However, it's a frustrating drawback that could have probably been fixed with some tweaks to the level layouts.

A Link Between Worlds

is a Zelda for people who have become disillusioned with Zelda over the years. It recalls the series' roots while also taking unique advantage of the 3DS hardware to create something that feels new. They may not make them exactly like they used to anymore, but Link Between Worlds shows that they still recognize what made them great in the first place. Rating: 8.5 out of 10

Disclosures: This game was obtained via retail store and reviewed on the 3DS. Approximately 19 hours of play was devoted to single-player modes (completed 1 time). No time was spent in multiplayer modes.

Parents: According to the ESRB, this game contains fantasy violence. Everything should be totally kid friendly. I didn't see anything overt or questionable.

Deaf & Hard of Hearing: Audio cues aren't a factor and there are no spoken lines other than the occasional gaps or grunt.

I’ve played about 5 hours of LBW now and I still don’t see how this game is any different from all the other mechanical, soulless Zelda games that Nintendo have trudged out over the past few years now. Ok, so you can do dungeons in whichever order you wish. Big whoop. The combat is still simplistic to the point of tedium, as is the platforming and the story. There’s just nothing about this game that feels organic, yet alone innovative. It’s all so paint by numbers. Its certainly a polished game but that dosen’t it stop it from being overwrought,… Read more »