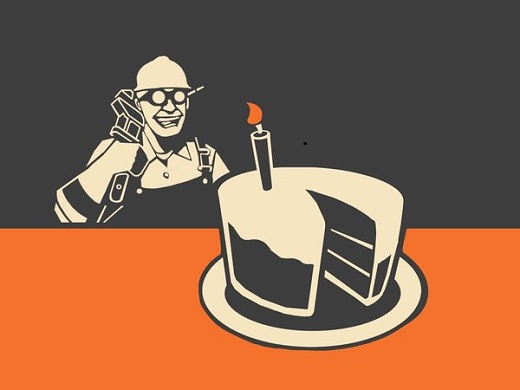 It has arrived. After two years, over 120 other updates, and about 145 hours honing my construction skills, The Engineer Update for Team Fortress 2 has come. The new toys are quite a bit different than what I expected, although I don't work at Valve, so what the hell do I know other than how to lodge a wrench into an unsuspecting spy's skull?

Most of the new items are extremely beneficial to offensive engies, making it easier to move that gear up as the rest of the team pushes forward. Indeed, the single biggest change comes not in the form of an unlockable, but in the ability to move buildings at will and redeploy them with all upgrades intact. This makes being an engineer on maps like Well or Badlands much less of a chore since now I don't have to blow my stuff up and totally rebuild every time control of the point changes. It's also incredibly useful when snipers and soldiers start attacking my stuff from outside the sentry's attack range. Now I can simply move it somewhere safer instead of having to watch it die a slow and painful death at the hands of a sniper.

This is the one update that I think has the potential to change the game more than any other. Engineers, along with medics, are the backbone of any given team. Their competence (or lack thereof) can be the difference between winning and losing, so naturally any kind of change can have a huge impact. But enough of my prattling-to the stuff!

The Frontier Justice – A nice little perk for players who keep their sentry on the front lines, this can be a great help in being able to save your dispenser/teleporter after your sentry goes down. However, the smaller magazine makes you a little more vulnerable to spies due to the long reload time. It's also a bit less useful on defense since your sentry won't be getting destroyed as much.

The Wrangler – Now this is interesting. Interesting enough to make me say "very interesting" whilst stroking my mustache. Which is pretty damn interesting. Camping engies can use this to great effect since soldiers or snipers that are just out of the sentry's range are no longer a problem, and the ability to prioritize targets can be crucial when you're faced with an ubered demo and a scout right behind him. The shield helps negate the soldier/sniper problem even more, as getting a few cheap shots in is no longer enough to take a sentry down.

However, a human player's aim is not going to be as good as the AI sentry's, so you are much more vulnerable to scouts running past you. And if the Frontier Justice makes you somewhat more susceptible to spies, the Wrangler coats you with the spy's favorite special sauce. The three second delay after switching away from controlling the sentry makes stab n' saps a lot easier, so keeping your back to the wall is crucial. Since it replaces the pistol you'll also be that much more dependent on your teammates for spy protection. Beware.

The Southern Hospitality – This is actually my favorite item in the whole update. Similar to the sniper's shiv, the bleed effect is very useful against spies since it takes away their ability to hide. Losing the ability to crit kind of hurts, but if you're like me you don't run into the heat of battle with the engie anyway so it doesn't matter. The fire damage vulnerability it penalizes you with is kind of bizarre since engineers don't seem to get lit up by pyros all that much compared to other classes, so I haven't yet seen any real downside to using this over the regular wrench.

The Gunslinger/Mini-Sentry – While it may not seem like much at first, this is a huge boon to engies who like to run and gun. You'll be surprised at how much havoc the mini-sentry can wreak before someone bothers to take it out. And it will be taken down quite often. Even scouts can destroy it quite easily. But here's the kicker-each time the gun is destroyed the Frontier Justice gets the crit bonus based on how many kills/assists the gun had before it went kaput. Combine that with the 25 point health boost and the hand's guaranteed crit after two hits and we've got ourselves quite a force. You do of course lose the ability to have an upgraded sentry, which makes you pretty much useless when it comes to holding a position. Personally I always play a pretty conservative engineer instead of trying to force things forward, but I can see this being deadly in the right hands.

The new maps that came with the update all seem pretty solid, although I haven't gotten to spend a lot of time with ColdFront at the time of this writing. Payload maps are generally my favorite, so I'm partial to Thunder Mountain and Upward to begin with. They also seem to be the most friendly to offensive engies, since in essence you have to defend a succession of positions, each for a short time. It's no coincidence that these maps came out with the offensively oriented engie items.

So now that the final class update has dropped, we are posed with a very important question. Is Team Fortress 2 complete? Other than the two remaining "Meet The Team" videos, is there anything left for Valve to do here? They aren't exactly shy about releasing sequels quickly nowadays, which is why I was half-expecting a bombshell announcement of Team Fortress 3 at E3 this year. Pure unfounded speculation on my part to be sure, but it definitely does feel like things will be winding down relatively soon. What do you think internet?