I was a Cyborg Ninja Assassin 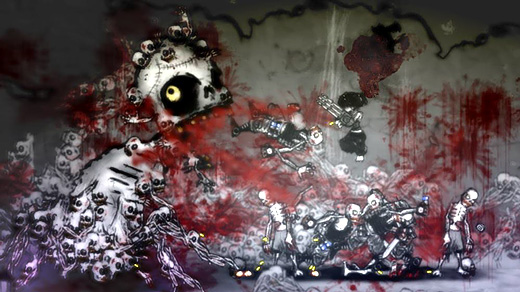 LOW: Realizing that the strategy for every single enemy is "warp behind them, then attack."

is very stylish. The swordsmanship is slick as can be, and the dark, brooding visuals do a great job illustrating the dystopia of the game's world. When I started the game, I was convinced that I was in for a genuine treat. Sadly, that feeling evaporated after the first hour or so. Vampire Smile has very little depth under all that window dressing.

Vampire Smile, the follow-up to 2009's The Dishwasher: Dead Samurai, follows two ninjas that are out for revenge of some sort. I think. The intermittent comic book cut-scenes, while very well illustrated, are extremely vague and never really gave me a concrete idea of what I was doing. Basically there's some evil business going down with some cyborgs, and it's up to the ninja hero/heroine to stop….whatever it is. Something is going on, but I'm not quite sure what.

Vampire Smile is a basic 2D hack n' slash button masher with repetition oozing out of its appropriate orifice. Oh, and there's lots and lots of blood coming out of that orifice too. Hack n' slash gameplay is by no means a bad thing in and of itself, but there's no depth here. The levels are all closed-in rooms indistinguishable from each other save for a few setpieces, making them a perfect setting for all of the fights against indistinguishable enemies.

The simplicity becomes incredibly glaring. The game changes very little after the first level, with the exception of the ever increasing amounts of enemies per encounter. Even the new weapons I steadily acquired didn't break the monotony. Vampire Smile is button mashing in its purest and most unadulterated form, as my thumbs can attest to. In fact, if I didn't know better, I'd say I was playing a less varied 2D version of the recent Ninja Gaiden games.

The bosses were particularly disappointing, as I was hoping they'd be the game's saving grace since the way to my heart is through a good boss battle. (Or through my ribcage. One of the two.) Anyway, there are plenty of big baddies that provide an opportunity for more creative fights, but these chances are wasted since all of them (except one) can be defeated by using a warp move to get behind them and then ninja-ing the living crap out of them. Using the same strategy over and over and over and over and over and over again gets very old, very fast.

Since every level is practically the same and even the bosses can be beaten with the same strategy, the only thing left for the game to throw at the player is increasing amounts of enemies. The vast majority of fights can be tackled by using the same warp strategy I mentioned above, so progressing feels a lot more like a chore than it should. The minions kept piling on as I pushed through the game, and instead of any sense of progression there was just more and more frustration. Being difficult is just fine, but I need to feel like I'm earning something for going through all of this.

is a game I really want to like, and I think with some more attention to level/enemy design this could be morphed into a winner. However, in its current form it's so shallow I just don't see the appeal in it. The only things it truly has to offer are some pretty weapon animations, lots of blood, and a certain feeling of old-school masochism. Fans of hand cramp-inducing button mashing or extensive weapon combos might find a lot to like here, but for everyone else there's just a pretty face and some scattered body parts. Rating: 5.0 out of 10.

Disclosures: This game was obtained via publisher and reviewed on the Xbox 360. Approximately 6 hours of play was devoted to single-player modes (completed 1 time on normal difficulty) and no time in multiplayer modes.

Parents: According to the ESRB, this game contains violence, blood, and gore. If my descriptions weren't clear enough, there's blood and body parts all over this game. No kids.

Deaf & Hard of Hearing: You should be fine. There are no spoken lines, and all relevant information is conveyed through text.

Frankly, I don’t think the reviewer played any more than a demo of this game or the first or second level. I’ve finished both campaigns and arcade mode as well and every single thing he said in his review is completely false. I’d even go so far as to say that I don’t even think he played this game at all. Bosses have plenty of variety and so do enemies. They are NOT indistinguishable. They all look different and they all have different attack patterns and weaknesses. The game does more than just throw more at you to try and… Read more »

“No gamer will sacrifice his time in testing a game he doesn’t like for more than this “first look”, the initial campaign. If he lasts even that long.” In writing reviews, Richard isnt just a gamer though is he? He is a reviewer. To be able call yourself a reviewer comes with a little more responsibility than that of a gamer. I have actually written reviews before and am very aware of what they entail and it is perfectly possible in very short limits to cover your subject in depth. I am sure Richard is perfectly capable of giving in… Read more »

[quote=Goatbot]Im just trying to point out that you will not be able validly talk in depth about a game until you have played the game in depth.[/quote] gamecritics reviews are always rather short, concise, not really in depth. I like’em, but they are more like a personal experience than a full scale analysis. There are sites with longer reviews, maybe boring for many and too long to the guidelines of this site but actually i doubt a full depth review is really that easily possible. No one except fans will do it. Either you like a game and spent happily… Read more »

@RandomRob Ok well thats your view. I respect that. Personally if I find a game is easy and I am getting away with cheap strategies then I will put the difficulty up so that I will enjoy it. You wont have fun if youre not giving yourself a chance of challenge so you wont enjoy the game and you wont want to play it a 2nd time. Thats my perspective anyway. Just looked at the twitter feed on the side. It looks sort of like my message has been misunderstood a little. Im not trying to attack Richard here. Im… Read more »

1st I would like to thank you for your response. Reviewers very rarely discuss any further their views. I am very suprised that you will give a game only 1 play on normal difficulty on 1 mode. It seemed from your writing there were very rash responses based on a very initial opinion. As a reviewer it is your job to get the fuller experience. You cant seriously tell me that it is ok to review a game by not reviewing it in full and at the right level of gameplay for you. It doesnt matter one tiny bit whether… Read more »

the only situation I can imagine where I would replay a game at a higher difficulty level would be one where I SO enjoyed the game, yet felt I wasn’t really challenged. (Mass Effect 2……) I do not replay a game that I felt was dull and unimaginative on normal difficulty. Agree with Richard and Mike – if a game is not interesting at normal difficulty, then there’s something wrong with the game. Goat, you could have posed the argument that the highest difficulty was the way to approach this game, which would have convinced me of positive aspects of… Read more »

First, I was not under any sort of pressure or deadline from anyone to get this review out. I played at my own pace. Second, a full playthrough on normal (or whatever the default is) difficulty should provide the full experience. If it doesn’t, that’s on the game and not the player. If I want more then it’s there for me, but I obviously wasn’t interested in replaying a game that I wasn’t very fond of, and I shouldn’t have to do that to get the “full experience”. I finished the game on the baseline setting-that’s enough. Third, I did… Read more »

So, wait, now reviewers are supposed to play through games twice and through each difficulty mode? I guess we missed the memo on that. It’s a nice idea (actually, no it’s not — no one needs to play through a shit game multiple times to know it’s shit, nor do they need to play through every difficulty of a great game to know it’s good), but it’s not very practical. Developers, on the other hand, should be ensuring that players get roughly the same experience on each difficulty level. It’s not the reviewer’s duty to spend 300 hours running through… Read more »

6 hours of gameplay in just the single player and only 1 time through each is nowhere near enough to really get to grips with the scale of this game. It is New Game + so your pickups carry over and you find new things to keep. Co op adds a different depth to play and a different story, 50 levels of arcade set you up with challenging situations in which you can improve various areas of your combat. You can take these abilities into the Dishwasher Challenge where the most precise players will strive for that perfect combo. Game… Read more »