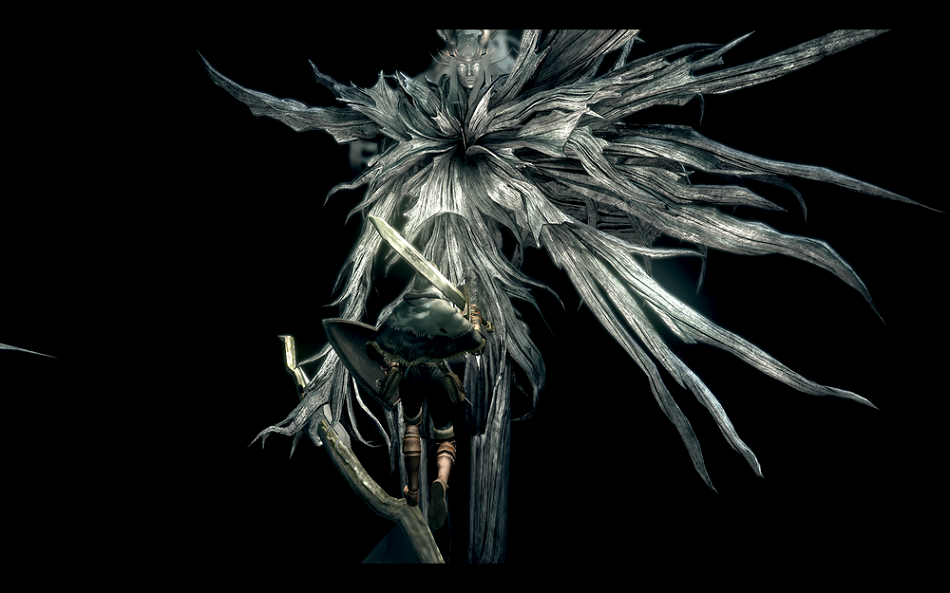 The original Dark Souls was my least favorite game in the venerable Souls series by a pretty wide margin. The reasons are numerous, but in a nutshell I just wanted to be done with it by the time I got to Gwyn. I was so aggravated that I skipped the Artorias of the Abyss DLC, which is regarded by many as the high point of the entire series. Being as obsessively completionist as I am about these games, I have to go back and take care of it before Dark Souls 3’s final expansion is released. I turned to GameCritics’ resident Dark Souls apologist Mike Suskie for guidance and counsel. The latest portion of our correspondence is below, with more updates to come as I progress through the game. Enjoy!

You bring up a very interesting point about Darkroot. You need to kill Sif in order to complete New Londo, and both of those areas are available very early in the game, so there’s no specific point in the game when you’re intended to tackle that branch. On my initial run of the game, I did it right after defeating the Bell Gargoyles, mainly because it’s right there under the bonfire (whereas the Lower Undead Burg requires some doubling back), and I’ve always stuck with that order because, as you said, Darkroot isn’t very difficult and can be an easy source of experience early in the game. The enemies are manageable, and I can practically sleepwalk through the Moonlight Butterfly and hydra fights. And yeah, journeying through there always left me with plenty of purple moss for the trip through Blighttown.

Sorry to hear that your return visit there wasn’t an improvement. I know you’re not a fan of Lost Izalith either (no one is), but are there any other upcoming areas that you’re dreading having to revisit, or is most of the bad stuff bad you at this point?

On the subject of Lost Izalith, my main problem with it is, of course, the Bed of Chaos, which is probably the most poorly-designed boss battle of the entire series. The area itself is actually super short if you know where you’re going, and since there’s no sense fighting those dinosaur things, there’s no shame in just bolting through it. Even better, if you’re following the Solaire quest, you’ll to open the Chaos Servant shortcut from the Demon Ruins, which actually allows you to bypass the lava section altogether. Completing Solaire’s story, by the way, will net you a Sunlight Maggot (which will make the Tomb of the Giants about a thousand times easier, since it allows you to illuminate dark areas without surrendering your shield hand) and it will allow you to summon him during the Gwyn battle. The only downside is that you’ll have to give up a LOT of humanities to open the shortcut, but since you’re way more experienced with the series now than when you originally played this game, I imagine you don’t need them as badly.

So you’re taking on New Londo Ruins next. Interesting. I initially found the Four Kings to be one of the most frustrating bosses in the game, mainly because the need to defeat them quickly is a total 180 from what Dark Souls teaches you to do the rest of the time (i.e. be cautious and methodical), though Bloodborne finally taught me how to play aggressively, and when I did my no-shield run about a year ago, I found that I was able to beat these guys with little issue. My only solution on my first playthrough was to basically bulk up, by doing EVERYTHING ELSE in the game and saving the Four Kings for last, and then just tank the fight. You have to beat them pretty early in the game if you want to meet Darkstalker Kaathe, though, which I assume is what you’re doing.

I always found that kind of weird, by the way. The big choice at the end of DS1 doesn’t make a tremendous amount of sense unless you hear both sides, and having to beat the Four Kings before placing the Lordvessel on the alter feels rather obscure, and not what most players would do on their first run.

Anyway, good luck with all of that. Still hoping you come out of this playthrough with a positive outlook on the game!

Yeah, I did the Four Kings last on my first playthrough for the same reasons-Tim Spaeth I think spent a few months stuck there.

This time I would up using the standard speedrun trick and going with the Stone Armor against them. The infinite poise means they can’t knock you over outside of the grab or the big explosion, so after getting the armor it was just a matter of beefing my weapon up to where I could kill them quickly. I actually consider Four Kings to be a pretty well designed boss-the intended strategy is clear, it’s just a matter of being strong enough to execute it. A damage race is a nice diversion from the cautious and methodical play that you mentioned, and having it within a boss like that was a good move. However, there desperately needs to be a bonfire somewhere in New Londo itself. The Four Kings have the worst boss “shortcut” of the entire series, which could have been avoided with one sensibly placed checkpoint.

My reasons for doing Four Kings early are entirely fashion-related. The Witch’s Set doesn’t appear until after the Four Kings are dead, and I wanted the Witch’s Set. Simple as that. Getting to see Kaathe is nice and all, but he does not beat out fashion.

As for your question, I think I am actually through all the areas I outright hated. Lost Izalith is not good, but I remember it as more boring than aggravating. The Duke’s Archives/Seath was my favorite level/boss from my first time, and I can’t wait to see how the view from there looks with DSFix on. I am also the only person on the planet who didn’t hate Tomb of the Giants, as playing slowly and cautiously is my thing anyway. Sen’s Fortress is another place I liked.

Speaking of Sen’s Fortress, this place is great, if only because it’s quite possibly the most videogamey thing to ever exist. The idea of the gods designing that rolling ball contraption and all the pendulums is hilarious in my mind, and the view of the first bell tower from the top is one of those classic Souls moments that really sticks with you. Still, being instakilled by that bomb-throwing giant as soon as you go up the stairs at the top is not at all fun, and it’s another instance of this game relying too much on cheap “gotcha” moments.

I’m onto Anor Londo now and about to get to Ornstein and Smough. This should be fun. On the subject of the Duke’s Archives, I wish I’d remembered to point out that you can actually see it jutting out over the wall of Anor Londo from the top of the bell tower at the Undead Parish. Another one of those brilliant little skybox moments that gives you a sense of how connected the world is, geographically. A couple others to keep an eye out for: You can see the outside of Lost Izalith when you first enter the Demon Ruins, and then you can see both the Demon Ruins and Ash Lake from different points in the Tomb of the Giants. Again, the skyboxes. One of my favorite things about Dark Souls 1.

Been a couple of days since you sent me this email (sorry for the delay), so I have to assume you’ve beaten Ornstein and Smough by now. I’d be curious to know how that went. It’s one of the game’s most notorious brick walls and I was obviously very frustrated with it on my first run, but upon replay it’s actually one of my favorite bosses in the game. Since the two move and behave so differently, I find it’s pretty easy to kite Ornstein around while Smough just kind of struggles to keep up. The trick is just keeping the camera trained on both of them whenever possible just so you don’t lose track of either. I’ve only ever cleared this fight by killing Ornstein first. One time I tried killing Smough first just for kicks, after which Ornstein ballooned to several times his normal size and kicked my ass. I’ve heard that’s the preferred order for casters, but I never use magic, so it’s never been for me.

That screenshot you sent me was taken inside the castle, which means you cleared the infamous Anor Londo archers. I assume no mention of them means that part didn’t give you much trouble this time? 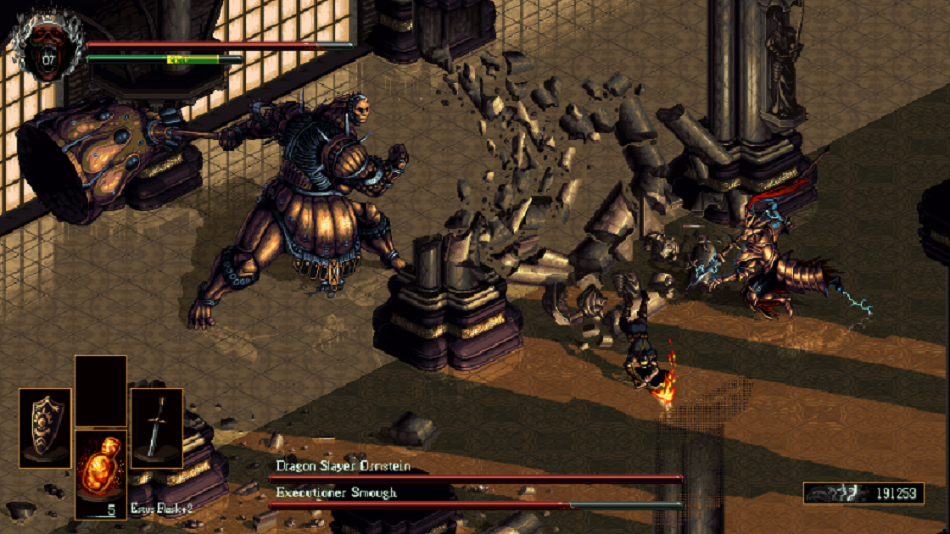 The archers were actually lot more trouble this time then they were originally, when I cleared them on the first try. Getting to the top isn’t so bad, it’s just being cornered by them that’s the problem. I think I got through on my third try. I realize these guys are undead/illusions/whatever, but the idea of Gwyndolin ordering them to stand in that exact spot is hilarious to me.

Ornstein and Smough are indeed down, and I was absolutely floored by how easy they were this time around, even when doing Ornstein last. Like most people I had a hard time with them in my first playthrough, and had to use a summoned player to beat them. I feel like this is another case of Bloodborne’s hyper-aggressive bosses over-preparing me, since this fight was mostly a breeze.

The first phase can still be tricky depending on how aggressive Ornstein decides to be and how often Smough uses his plowing attack. Their randomness is the main obstacle, since neither of their attack patterns are synchronized. Smough hits hard but his hitboxes actually seem to be pretty forgiving, while Ornstein has long periods where he will just dash around and do nothing. Smough is also very weak to fire in the first phase, so he went down quickly once Ornstein gave me a few good windows of opportunity.

For the second phase, I found that I could just stand between Super Ornstein’s legs and whack him in the crotch. His AI seems to get confused as to where you are when you do that, so he either jumped back or tried to do the lighting grab, which isn’t hard to dodge when you’re directly beneath him. The only other threat is the lightning butt drop, which for whatever reason he chose to use only twice. Got him down on my second try.

From a design standpoint, I always thought this fight was a bit sloppy. Ornstein and Smough don’t feel as if they should be paired together in either a aesthetic or mechanical sense, like they were separate encounters at some point in development. I’m sure there’s some piece of lore that explains why they’re together, but it’s not apparent in-game. Compared to Watcher/Defender and Lorian/Lothric it comes off as lackluster, with hindsight of course. *Great* song though. My favorite on the Dark Souls soundtrack by far.

After getting the Lordvessel I went ahead and cleaned up Lost Izalith and the Bed of Chaos since I already had the Chaos Servant shortcut open. There’s not a ton to say about it-it’s boring. You know that. I know that. Even Miyazaki admits that Bed of Chaos is the worst boss in the series. I was at least able to skip the Centipede Demon this time, which was the most aggravating boss for me on my first run.

That only leaves Duke’s Archives and Tomb of the Giants before getting to the DLC. Happy times are ahead.