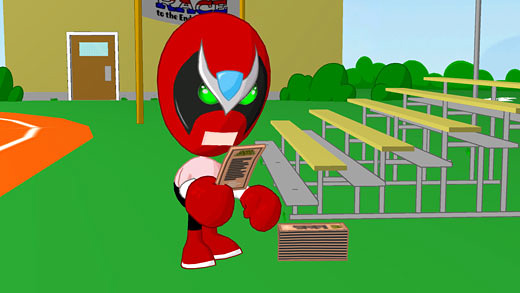 LOW Metal detector use gets a little tedious.

WTF All the WTFs are acknowledged and made fun of by Strong Bad at some point.

In the interest of full disclosure, I admit that I am a huge Homestar Runner fan. I've followed the series since 2001, I can tell you what most of the sbemails are about by the title alone, and I can do a pretty dern gord Coach Z impression. In fact, I'm not even sure I would call Homestar a series, but rather an amalgamation of things that are awesome, or an AOTTAW. Hey, I just invented a new acronym; please take note Internet. So obviously, I was interested in Strong Bad's Cool Game for Attractive People from the moment it was announced, and thankfully I was not disappointed; Telltale and the Chapman brothers (Homestar's creators) have joined forces to bring us classic Homestar awesomeosity.

The player takes on the guise of Strong Bad, everyone's favorite wrestling mask-clad antihero. The game goes hand in hand with Telltale’s revitalization of the adventure genre, as Strong Bad must make his way through each tale of silliness using his wits, his rakish good looks, and any random object that happens to be clickable. The controls, like in most games of its type, are as simple as can be and are extremely easy to learn. The only complaint I can really make against Strong Bad's is the use of the metal detector to find a lot of the extra items which are buried somewhere in the game world. This requires a lot of walking around in random places, which can get a little annoying. Fortunately, most of the things you can find with it aren't required to finish the game, and even Strong Bad himself eventually acknowledges that the metal detector can make things a little dull. Indeed, the game's propensity to poke fun at itself in this manner is one of its most appealing aspects.

Strong Bad's follows the episodic distribution pattern that Telltale has been using for Sam & Max, making its debut with a five-episode season. Each episode is about 2-3 hours of gameplay (with enough extras to push it to 4 hours if one so desires), which is precisely the right length for something like this, as the game never wears out its welcome with monotony or tediousness in any of the episodes. Strong Bad's follows a familiar adventure model, powered by the Telltale Tool with a shiny new coat of Homestar Runner paint. Strong Bad must acquire items scattered about the game world in order to solve puzzles and thus advance through the game. Fairly standard, yes, but it fits the story like a glove (or the story fits the engine like a glove depending on your analogical preferences), and in an adventure game the story is what it's all about. 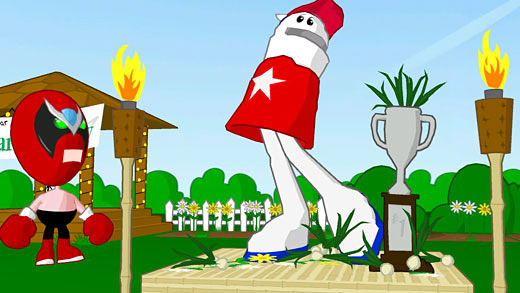 The humor of Homestar Runner is unique to me, in that the comedic reaction it provokes is more akin to that of an 8-year-old watching cartoons on Saturday morning rather than a Family Guy-esque guffaw. Homestar's quirky, goofball charm is something that I initially feared could not be effectively captured in a game, but Telltale along with the Chapman brothers have done just that. Each episode looks, feels, and sounds just like a fresh-off-the-Flash presses Homestar cartoon, and can be listed among the Chapmans' better work to boot. Throughout each episode, I found myself enjoying the back-and-forth between Strong Bad and the rest of the cast just as much as if I was watching one of the cartoons. The writing feels natural for the characters and the all the gags are what I have come to expect from Homestar.

Needless to say, if the player doesn’t like Homestar Runner (or if he doesn’t like adventure games) then he won’t enjoy Strong Bad's. Adventure games are tied to their narratives more than any other genre, even more than any flavor of role-playing game. The only way the player interacts with the game world is by selecting items from inventory, using items on selected objects/puzzles, and choosing different conversation options. Adventure games don't lean on their story, they are the story. I'm sure as hell not going to play Carlos Mencia's piece of crap game for people who like bad comedians, even if it was made by Telltale. If the story is good, then the game is probably good. If not, then the game is nothing regardless of what new features the engine might have to show off. Strong Bad's is an adventure game, plain and simple. And it’s a darned good one, depending of course on your particular like or dislike of Homestar Runner.

Usually when I say I like a game it will come with a few caveats, such as camera problems or lack of difficulty that will hamper my playing experience to a degree where I become annoyed. A great game to me does not necessarily need to be the pinnacle of design or feature some exciting new gameplay mechanic. Those things are fantastic in their own right, but they aren't absolutely necessary. Rather, a great game is one that has no "lows" (as the GameCritics review format so succinctly puts it) that severely hamper the experience. I came into Strong Bad's expecting quality adventuring, the unique comedic stylings that make me feel like I'm a kid watching Rocko's Modern Life again, and some good old fashioned The Cheat kickin'. That's exactly what I got, and there was virtually nothing throughout the experience that annoyed or dissatisfied me. Rating: 9.0 out of 10.

Disclosures: All five episodes were obtained through online purchase and reviewed on the PC. Approximately 12 total hours was spent in completing each episode once.

Parents: According to the ESRB, this game contains Crude Humor, Mild Cartoon Violence, Mild Suggestive Themes, Use of Alcohol, Alcohol and Tobacco Reference, Comic Mischief. (Varies by episode.) There isn't anything here I wouldn't be comfortable exposing a child to.

Deaf & Hard of Hearing: While all spoken lines can be subtitled in the option menu, much of the game's charm comes from the music and the voice acting, so the hard of hearing will miss out on quite a bit.

These are admittedly kind of mediocre old-school adventure games, but fantastic Homestar Runner games. They’re great just to mess around in that world and laugh at all the great dialogue and enjoy some simple puzzles along the way.