You Got Your MMO in My KOTOR 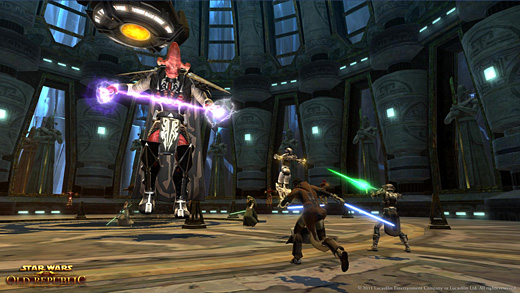 HIGH Keeping my party barely alive as we take down a nasty boss during a flashpoint.

LOW Being thrown into a PvP match against players 20 levels above me.

WTF Acquiring a companion who is the last of his kind, then walking outside and seeing five more of him.

I don't play MMORPGs. World of Warcraft failed to hold my interest past level 22, even after the updates designed to make leveling up faster. Rift only managed to keep me around until about level 12, and Guild Wars topped out at level 9. I don't remember how long I spent with the original Everquest, but I know it wasn't more than a few hours. So, it was with some trepidation (Brad's exact words: "Help me Richard, you're my only hope") that I accepted a review assignment for Star Wars: The Old Republic

, since as I said, I don't play MMOs. However, I really like Star Wars, and Knights of the Old Republic in particular. I couldn't pass up the opportunity to check out what is essentially KOTOR 3-9, and what will be the last BioWare-made Star Wars game for the foreseeable future.

To my very pleasant surprise, The Old Republic managed to engage me more than any previous MMO ever has. Even more shocking, I found myself actually enjoying some (but definitely not all) of the things that make Old Republic an MMO.

First, it must be said that Old Republic is a World of Warcraft clone. I create a character, I go through a starting area/planet to get my bearings, and from there I take part in both solo quests and group dungeon runs with other players. As I level up I get new powers and better gear, and gain access to new areas where I can even more powers and even better gear.

There are obviously minor tweaks and improvements, but the formula is essentially the same as Blizzard's. Players looking for that special MMO to break the World of Warcraft mold aren't going to find it here. However, a clone can still be a good clone, and The Old Republic makes itself stand out by attempting to integrate the deep story-driven experiences BioWare is known for into traditional MMO mechanics. Unfortunately, this combination isn't always a successful one.

Each of the eight character classes available to players has its own custom BioWare-style narrative to play through. This story aspect is primarily what kept me in as long as I was, but it often felt out of place in an MMO. The story treated my character (a Sith Inquisitor) as if I was the only person existing in this role in this universe. According to what the game was telling me, I was Darth Zash's only apprentice, I was making a rapid ascent through the Sith ranks, and I was having an great impact on this world. 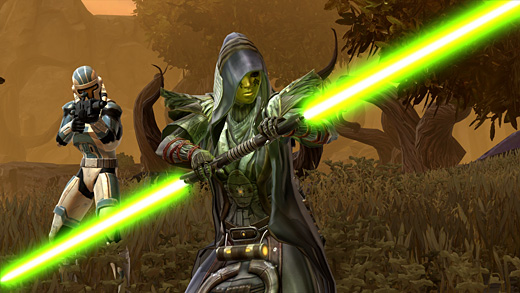 Instead of following through on this promise of unique existence and empowerment, it quickly became clear that I was having very little effect on the world, if any at all. My story was not my own, and my character felt like a tiny speck in what was a very static universe. In a way it felt like a bizzarre acknowledgement that rarely do a player's decisions have any meaningful effect on a game world as a whole, even in something like Mass Effect or The Witcher. However, there's usually a strong illusion present to convince the player that he is important, usually through story or world-building. In The Old Republic any such illusion was shattered whenever I encountered other players that shared my quest path.

I don't think "the BioWare experience" is best shared with others. It was incredibly dissonant to see so many others intruding on my fantasy, running around doing my quests, with my companions. For example, the first companion my class acquires is the last of an ancient race of warriors. I defeated him in a duel and thus he swore allegiance to me, becoming my trusted bodyguard. Then, I walked outside and saw five more of this companion. The game is filled with incidents like this, and any sense of player ownership was immediately shattered when I exited the designated story areas. This came off as a fundamental conflict of purpose to me. Two starkly different game types were trying to co-exist in the same space, and being pulled back and forth between them was extremely awkward.

However, The Old Republic did manage to get me interested in the World of Warcraft style of gameplay, which no other MMO has done. Leveling up my character and gaining new powers was satisfying, and group play was genuinely enjoyable. I was able to pick up on general terminology (oh, so that's what Aggro means) pretty quickly, and despite some rampant trolling in the main server chat, I found the random players I was grouping with to be generally affable and good-natured.

Settling into my healer/support role was particularly enjoyable, especially when I was the savior of the team against the bigger enemies. (Pro-Tip: for instant love and adoration, be a healer in an MMO). The player versus player matches also worked out well, though something needs to be done about level 20 characters being thrown up against level 40s. Still, the roleplayer in me was having a good time, at least when I was up against those that matched my own strength.

Unfortunately, as the high points of group play and story segments began to have more and more fetching and grinding stuck in between them, my interest in logging in to play waned. For every time I advanced the story or got to take part in a cool group mission, it felt like there were hours of quests in the vein of "go kill these ten droids" or "go activate these three random switches." Due to level requirements for the later planets, playing just for the story is all but impossible, and having the parts I liked buried under so much tedium became too much to bear.

I wound up bailing out on Star Wars: The Old Republic

well before hitting the level cap, but not before digging into it more so than any other MMO I've played. Even if it is an unhappy marriage between two wildly different game types, the fact that it kept me hooked for so long at least counts for something. Rating: 7.0 out of 10.


Disclosures: This game was obtained via retail purchase and reviewed on the PC. Approximately 52 hours of play was devoted to multiplayer modes. Character info: level 26 Sith Sorcerer specced for healing.

Parents: According to the ESRB, this game contains blood and gore, mild language, sexual themes, violence. There are no overtly gory or bloody parts, and there are only a few instances (that I saw—I didn't sample the entire game obviously) of sexual references. However, being an online game the general internet population is always a concern, so you'll want to keep an eye on the kids if you let them play.

Deaf & Hard of Hearing: All relevant lines are subtitled, but using Ventrilo or other voice chat options is invaluable during group play, so hard of hearing players may find it somewhat inaccessible.

For what it’s worth, if you wanted to avoid tedium while leveling in an MMO, playing as a healing spec is not the way to go. Unless, of course, you have a friend playing with you and doing all the damage for you. That aside, I think you do a decent job, as a non-MMOer, explaining what makes TOR good and what some of its weaknesses are. I have less of a problem with the fact that there are other versions of “me” running around than that my story sometimes (though certainly not always!) feels as if it’s being pushed… Read more »

I think it’s actually a giant Rakata, but they do look similar to the Mon Calamari.

Is it just me, or is that top image a giant Admiral Ackbar with lightning coming out of his hands?