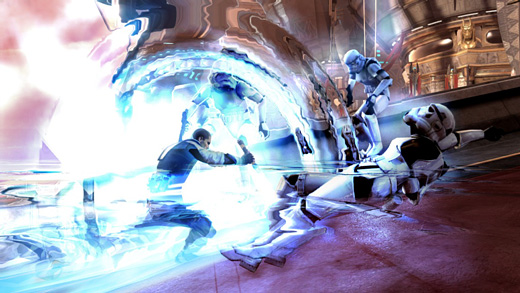 A long, long time ago, I posted a review to the GameCritics forums in the hopes of getting it published… And it was. So began a long, arduous journey that resulted in these words being rendered on this internet website place. Looking back on it, there are some things about the review I don't like (as it is with pretty much everything I write) but overall I still stand by the assessment I gave at the time.

The game in question was Star Wars: The Force Unleashed, the Star Wars-themed hack n' slash from 2008.

Naturally, the release of The Force Unleashed II

represented a bit of a milestone for me. Unfortunately, that's the only positive thing it represents.

Force Unleashed II is awful in every way imaginable. An undercooked God of War clone in every possible sense, Force Unleashed II is a half-assed, sloppy production with sound effects and imagery from the Star Wars movies thrown in so it will sell. Absolutely no attention is paid to balance, design, or aesthetic. Then again, isn't such a shallow experience what we've recently come to expect from Star Wars?

The entire experience of Force Unleashed II consists of running through hallways fighting the same enemies over and over and over again. The kind of meaningless fluff that usually gets added to pad playtime comprises the entire game here. The original Unleashed could at least boast some varied opponents and settings, but this excretion doesn't even try in this regard. There are only four locations in the game and three of them are almost indistinguishable from each other. The fourth setting is the painfully shoehorned Dagobah level, which entails running in a straight line for about fifteen seconds, collecting some power-ups, then seeing a totally pointless cut-scene with Yoda. Everything else is a sterile, uninteresting collection of hallways that only serve to host the game's awful battles. 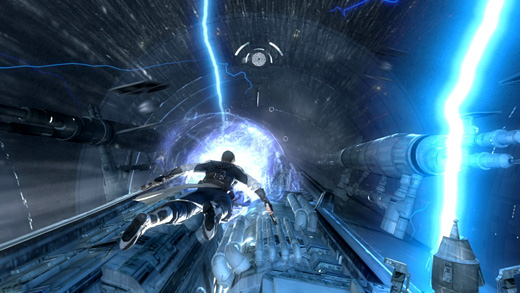 In terms of ability development, Starkiller, our wonderful canon-destroying hero, has two lightsabers now, and apparently that's supposed to cover up the fact that combat is exactly the same as it was in the first game. While the lightsaber skills are still as cool and flashy as ever, the problems from Force Unleashed carry over as well. Force throwing objects is still a pain, especially when trying to hit far-away targets. It actually seems worse now, with the objects I was levitating being even harder to control. Target locks are still a huge problem, as the game still tends to think of a random crate on the floor as a more apt target than the walker staring me down.

If the normal enemies weren't bad enough, this steaming pile also "features" some of the absolute worst boss battles I've ever seen. All of them (except for Darth Vader, which I'll get to momentarily) are huge monoliths with slow, easily dodgeable attacks and some glitchy, pace-breaking quicktime events here and there. They hold absolutely no tension or thrill, and some guy on the radio telling me exactly what to do from the very beginning of the fight saps them even further. I'm not a fan of modern boss design, but these pathetic excuses for bosses can't even meet an already low standard.

The final straw was the head honcho himself, Darth Vader. This fearsome Sith lord barely attacks, with most of the fight consisting of him summoning clones while spouting off contradictory taunts about the Dark Side. The "epic confrontation" is reduced to blocking attacks (until Force Lightning is used, of course) or running away and killing clones. I literally had to had to stand in front of him for several seconds before he even took a swipe at me, and even then it was so slow it I almost thought I was in bullet-time. Oh, and his health? He's got a ton. I felt like I was swatting him for at least a week.

It's difficult for me to put into words just how much I hate Force Unleashed II. In a way, it represents what Star Wars has become—a soulless, boring mess that only barely recalls anything resembling quality. Even with my low expectations coming in, I was blown away by how poor Force Unleashed II truly is. I feel as though I should connect with my opening and wrap this up with some kind of witty parlance about my growth as a critic, but I don't think there's anything left to be said. Star Wars: The Force Unleashed II

Disclosures: This game was obtained via rental and reviewed on the Xbox 360. Approximately 6 hours of play was devoted to completing the game once on normal difficulty. There are no multiplayer modes.

Parents: According to the ESRB, this game contains violence. There's nothing here to be worried about, as nothing surpasses the level of violence seen in any of the movies.

Deaf & Hard of Hearing: You should be fine. All spoken lines have subtitles and audio cues are not a major factor in gameplay.

Force Unleashed 1 was a poorly designed game (that was fun in some parts/ways). Everything I’ve heard about FU2 makes it sound like an unfinished game that didn’t fix any of the obvious problems left from FU1 and created new ones that FU1 didn’t have. I couldn’t be more disappointed with this outcome.

I actually think this was a product of the turmoil going on at LucasArts. There were massive layoffs while FU2 was being developed, and the executive producer left a few months before the scheduled release. Obviously I don’t know exactly how any of it directly impacted the game, but it’s clear that something went horribly wrong.

It’s to the point that FU2 is a scam. Nobody can play this and tell me with a straight face that it’s a finished product, and charging $60 for six hours of nothing is just dishonest.

lol. Sounds like the first Phantom Menace game they made for the PS1.. remember that awfulness?

Sometimes I feel like game companies have secret flagship franchises that no matter how awful, they keep re-making. As if there’s an agenda of suck.

FFXIII, for example, felt more like the sequel to the Bouncer than FFXII. Know what I mean?

Good review a shame the series sucks.
I am worried if they ever go back to Jedi Knight they will make it a watered down half assed mess.

Best review I’ve read in a while. That is all.