Get the Bullpen Warm, He's Done 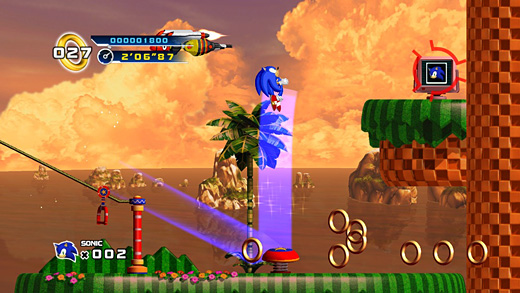 HIGH: The feeling of being almost out of control when being flung through a level.

WTF: Every stage is a re-hashed version of a stage from Sonic 1 or Sonic 2.

"Falling from grace" is putting it lightly when it comes to Sonic The Hedgehog.

After a glorious run in the 90s, the blue blur's gaming expeditions have ranged from mediocre to downright awful—they were sort of like the San Francisco 49ers of video games. The industry-wide shift from 2D to 3D hurt Sonic perhaps more than any other established gaming franchise, as its trademark brand of super-fast platforming could never quite find a home in the 3D universe. In the face of such failures, one could hardly blame Sega for taking Sonic back to his 2D roots with Sonic the Hedgehog 4. However, instead of a grand rebirth of a franchise a la Knights of the Old Republic, Sonic 4 comes off as a dated platformer with nothing more than a graphical overhaul.

Almost every single stage, obstacle, enemy, and sound effect is a straight port from something that was in either Sonic 1 or Sonic 2. The bosses are especially glaring, as they emulate their 16-bit counterparts almost perfectly save for a few new attacks. I was able to beat just about everything the game threw at me using knowledge from almost 20 years ago. Hell, I even knew what the final boss was going to be a full six levels before I got there. Something like that shouldn't be happening in what is supposed to be the defibrillator shocking new life into a dying hedgehog. Sonic 4 doesn't feel like a new game, but rather like a remake of the older titles—and even when considered as a remake, it still manages to come up short.

As his name implies, Sonic's game has always been about speed. There were times in the old Sonic games when things were moving so fast that my eyes had trouble keeping up, and I almost felt out of control. Almost. To Sonic 4's credit, the rush of rocketing through a stage at blazing speed has been captured fairly effectively. Unfortunately, the spiky devil apparently hasn't aged too well, as moving when not running is even more sluggish and difficult to control than in the old days. This sluggishness becomes a big problem in the slower-paced levels involving any kind of precision jumping. Sonic's collision detection also feels a bit off, especially on the pinball flippers in the casino stage.

I was expecting to like Sonic 4 a lot more than I did. I spent many, many hours getting those stupid chaos emeralds back when I still had summers to fritter away playing games, but the copy/paste feeling of the content and the physics problems combine to make Sonic 4 a nostalgia trip that invokes no sense of nostalgia. Rather than representing a revitalization of the Sonic brand, Sonic 4 is a failed, desperate grasp at recapturing its former glory. Rating: 5.0 out of 10.

Shop Sonic the Hedgehog at Bizrate

Disclosures: This game was obtained via publisher and reviewed on the PS3. Approximately 2.5 hours of play was spent completing the game once. There are no multiplayer modes.

Parents: According to the ESRB, this game contains cartoon violence. Everything is essentially the same as it was in the old games, so there's nothing for kids/parents to be afraid of. However, if you get motion-sick you may have to look away occasionally when things start moving faster.

Deaf & Hard of Hearing: You should be fine. There are no spoken lines and audio isn't a significant factor in gameplay.

Something of the magnitude as a NEW installment in not just the overall sonic universe but the actual numbered adventure (and sequel) to sonic 3 needed at least SOMETHING new to it, the 3D visuals aren’t enough, especially when every movement and level is a direct paper trace of the original sonic game on the Genisis (Mega Drive to new kids). Very sad indeed thinking i had any hope for this game, more sad to think of the money i blindely spent on it, but, for me playing is believing, with the kind of critic-filled backhand any wii game gets… Read more »

I wont comment on it being rehashed mikly wank but I will say Sega for the most part sucks with their inability to do justice to a normal console game. Most of the new sonic games have been trash(same for Mega man, alot of parallels there). I think they need to re do sonic, take Mario 6$ mix the level layouts with GTA3 add larger areas and more above ground and below ground areas and a descent leveling/equipment system to adjust/boost his abilities Sonic would be come an awesome game. The trouble thois…milking it is cheaper…..

Bummer. Haven’t downloaded Sonic 4 yet (price-tag has kept me holding off) and probably won’t now. The game looks so purdy too. Look at the clouds in the screenshot at the top of this review. Damn, so nice looking. What a shame the game doesn’t deliver. Oh well.

Had they simply designed some new levels instead of completely ripping off the old ones I think I’d have liked it a lot more.

I agree about the music too-it’s downright awful.

You criticise the game because it doesn’t try to differ from the Megadrive titles too much, but that alone for me would have quite easily been enough. Watching some fanmade Sonic Youtube videos shows a great deal of potential for updating the previous games. Sadly, Sonic 4 fails either way, as you say, so I’m in general agreement.

What hurt it the most for me was the way the game feels; it’s just not Sonic. And the music? Damn. Just. Damn.