A Joy from Afar 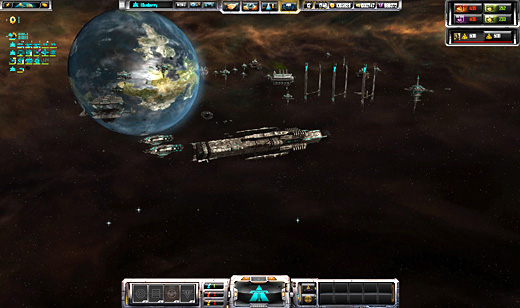 HIGH Blowing up an enemy capital ship as it tries to jump out of the system.

LOW Getting rocked by pirates right as I'm about to mount an attack on my main enemy's homeworld.

I suck at real-time strategy (RTS). I'm an extremely deliberate player when it comes to most games, so the quick thinking required by RTS and I never get along. Add in the strategy responsibilities of something like Sins of a Solar Empire: Rebellion

However, I've played enough games to be able to tell the difference between a bad game and a good game that just doesn't suit my play style, and Rebellion falls into the latter category. While it's absolutely not the kind of thing I would seek out and play myself, it does have quite a bit to appreciate.

Rebellion, the latest expansion to Stardock's Sins of a Solar Empire, bills itself as a "RT4X" game, combining elements of the RTS and 4X genres. 4x games are built on the concepts of "explore, expand, exploit, and exterminate", with emphasis placed on developing an actual empire rather than just a military. However, unlike most traditional 4X games like the Civilizations, Rebellion's gameplay is real-time rather than turn-based, making quick thinking a must. The simplest way I can describe it is a cross between StarCraft and Civilization.

4X games are known for being very complex, and Rebellion is no different. The amount of things to keep track of can be intimidating, but the tutorial does a (mostly) good job of preparing the player for them. While no amount of practice can fully prepare one for an aggressive AI or a human player, the training mode explained things like resources, fleet capacity, upgrades, and the various types of available ships. Daunting as the game became, it never felt outright unfair.

Actual gameplay was enjoyable enough. The more Civilization-like aspects provided a nice break from the grind of building my fleet, and forging an alliance with an enemy rather than destroying them was very satisfying. However, as the game bore on it became increasingly apparent that I was way out of my element. The barrage of alerts, tech trees, units and all the other things to watch was just overwhelming, and even against an easy AI I was lagging behind.

However, this is on me, not the game. Everything I needed to succeed was there, but my skill level was simply not up to snuff. For all intents and purposes I was adequately prepared for the situation I was in, but I was often examining my new Vasari carrier ("Oooo I wonder where the hanger bays are") rather than paying attention to the imminent pirate attack.

Speaking of that carrier, it has to be said that Rebellion is pretty. Very pretty. The level of detail on the various ships and planets is impressive, as I would spend large amounts of time zooming in and just looking at all the little flying cars on my homeworld, or trying to find the weapon emplacements on my capital ships. The three playable races (there are six factions, but they’re composed of only three races) all have very distinct vessel designs, and the galaxy itself is quite marvelous.

Sins of a Solar Empire: Rebellion

is a game I really wish I was more skilled at. I appreciate all the various aspects of gameplay and the depth that the combination of those aspects provides. Still, as my fellow critic Kristin Taylor might say, I was far too enamored with the construction of my newfangled Titan to react quickly enough to the raiders destroying my infrastructure. While it's a long, long way from being up my alley, it at least makes for a good spectator sport. Rating: 7.5 out of 10

Parents: According to the ESRB, this game contains fantasy violence and mild language. I didn't notice anything that I wouldn't let a child see or hear. This might actually be a good game for kids to learn to multitask with, though it may also be overwhelming.

Deaf & Hard of Hearing: There are some audio alerts that denote when you are being attacked or when a unit has been completed, so deaf players may have problems with them. Other than that audio shouldn't be a problem, as all other meaningful information that I saw is text-based.