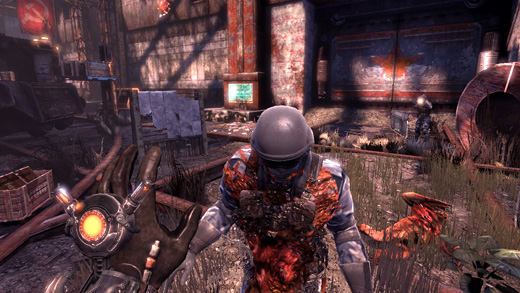 HIGH: Making an unorthodox choice at the end of the game.

WTF: That Kathryn has time to show me the promotional video for her rebel group while enemy troops are chasing us.

Like any other art form, most games evolve from some kind of creative inspiration, and most have something unique to show off. This unique element doesn't have to be anything large or significant. It doesn't even have to be important to the game as a whole. Singularity, a first person shooter from Raven Studios, has the dubious distinction of having no sense of originality whatsoever. There is no spark, no point of inspiration, no artistic sense of uniqueness to be found here. Does that make Singularity a "bad" game? Not necessarily, but aiming for such a low-hanging fruit never produces greatness.

Singularity is a first-person title that takes most of its cues from shooters of the recent past, resulting in a Frankenstein-like creation complete with ugliness and graceless lurching. The main selling point is a time-shifting device called the TMD. With it, the player can rapidly age or revert objects and enemies: things like aging an oncoming soldier into dust, or restoring a destroyed staircase.

While it is pretty cool to see the pieces of bombed out structures slowly piece themselves back together, the novelty quickly wears off and the TMD devolves into nothing more than a glorified key/disintegration ray. It does gain a few other functions as the game progresses such as time-slowing bubbles and the ability to levitate objects, but none of them are particularly noteworthy. It's usable and doesn't hamper the game in any way, but the TMD is simply not interesting enough to carry the game on its own. However, Singularity's primary failure doesn't lie with the TMD, it lies with its bland setting.

The plot revolves around the island of Katorga 12, a secret Cold War-era Russian research facility where the TMD was developed. Naturally, things went terribly wrong and all of the island's inhabitants were either killed or turned into monsters—because, you know, those things just happen at secret Cold War-era research facilities. While Katorga 12 is initially described as a once thriving community with lots of researchers and their families living there, the sense I got from walking through its remains is that it was always desolate and never alive. Even during the portions where I went fifty years into the past, it felt like I was always in the same giant tomb. Worse, the different parts of Katorga 12 have almost nothing to distinguish themselves from one another.

If you've seen one broken piece of 1950s Soviet architecture, you've seen every broken piece of 1950s Soviet architecture. Almost every area is a drab, uninteresting pile of rubble with a few unscary monsters and maybe some Russian soldiers running around. Even when I went back in history, I just got to see the drab, uninteresting level before it became a pile of rubble. Given that I had to spend a lot of time exploring the levels during segments with no action, such a dull environment is a serious problem. A game world such as this needs to be its own character to a certain degree, and while Katorga 12 has obviously seen quite a lot in its existence, it has very little to say to the player.

One particularly bad example of the world design came fairly late in the game when I was swimming through some underground tunnels. At this point I had seen all manner of corpses strewn about, either killed by radiation or the monsters roaming the island. I turned a corner and saw a decayed body floating in the water. The music changed for a few seconds to help illustrate the fact that I was supposed to be scared here, but I wasn't. The idea that the game threw something at me that it had already used a million times before that and expected me to be shocked told me that perhaps the developers too were getting a just a little bored after spending so much time on Katorga 12.

As I trudged on through the game I saw a series of very un-subtle notes, audio diaries, and half-assed attempts at Fallout-style apocalyptic humor placed throughout the world, which felt very cheap compared to the type of environmental storytelling found in games like BioShock or Portal. Hell, BioShock at least made their audio diaries interesting to listen to. What's worse is that almost all of the messages were a variation of the same thing; "our lives were perfectly happy, but then something exploded and turned everyone into monsters, and now we're scared." The game was trying to force its narrative on me rather than let me discover it for myself through the world, and it was a very thin narrative at that.

The multiplayer side of Singularity works for what it is-a limited but enjoyable class based FPS with a few dashes of Left 4 Dead thrown in. Some of the monsters are a bit overpowered (especially the Zeks) but the surprisingly balanced use of TMD powers spread out through the different classes worked reasonably well. Rather than make everyone a time shifting juggernaut, there is an element (albeit a small one) of team strategy here. It felt like there was a lot more care taken to crafting the multiplayer experience than the single player campaign, really. Sadly, the game always had lag problems during multiplayer, although whether this was a problem with the game itself or Xbox Live I can't say.

Normally I'd throw a 5 on a review like this and call it done, but there's one more thing that really irked me-the complete lack of a subtitle option for spoken lines. I have perfectly fine hearing, but I normally turn subtitles on just to make sure I catch everything in case some of the audio is muffled. There is quite a bit of talking in Singularity, and I can't imagine what it would be like for a deaf player trying to follow the story or even play through the game without hearing the audio cues. It is totally inexcusable to not have a subtitle option.

Singularity is the very definition of average, and the lack of subtitles knocks it just below. It is the gaming equivalent of white rice, the Ford Focus, and black coffee. Its taste is decidedly bland, but it'll do its job. It won't elicit your hatred (unless you happen to be hard of hearing), and it probably won't kill you in a car wreck. However, it is a soulless, uninspiring experience that doesn't even attempt to hide the games from which it is pieced together. It has no creative spark to call its own. Rating: 4.0 out of 10.

Disclosures: This game was obtained via rental and reviewed on the Xbox 360. Approximately 8 hours of play was devoted to completing the single player mode on normal difficulty, and 1 hour of play was spent in multiplayer modes.

Parents: According to the ESRB, this game contains blood and gore, intense violence, and strong language. Although the game tries and fails to be scary in most instances, that M rating is still on there for a reason. Keep the kids away.

Deaf & Hard of Hearing: As I said, there are a lot of spoken lines and no subtitle option. Audio cues are also used a lot in determining when enemies are present, so players with poor hearing will likely have a lot of trouble with this game.

As much as I try to keep an open mind about new releases, this game has always struck me as a cheap Bioshock clone/cash-in. It looks like most reviews feel the same way.

I think Dead Space is a great example of a game that does almost nothing new but is able to surpass its influences. It felt like the development team looked at the survival-horror genre, identified what made games scary and what made these games good.

Recycling game designs is fine-you’d be hard pressed to find a game that doesn’t emulate another game in at least some fashion. The difference is how well they do it, and if they can bring a few original things to the experience or not to set themselves apart. Singularity failed to do that, and I’m guessing by Trent’s opinion (I haven’t played it) that Nier did.

seems like between your and Trent’s last review both of you are praising or bemoaning recycled game designs – I smell a podcast topic!