The best of the past, without the worst 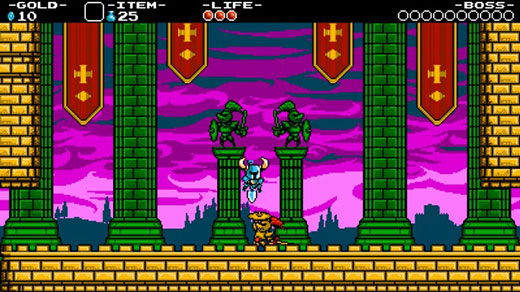 LOW Accidentally pogo jumping and destroying the floor underneath me.

WTF The AI companion's behavior during the final boss is hilariously videogamey.

I have no real affection for 8-bit games. Besides the Mega Man and Mario entries on the NES, my 8-bit memories mainly consist of my 7-year-old self being frustrated and not having any clue what the hell I was doing in games like the Metroid or The Legend of Zelda. Obviously the NES era was extremely important for gaming as a whole, but it just doesn't hold the kind of emotional attachment for me that it does for others.

Shovel Knight, an indie platformer from Yacht Club Games, is aimed precisely at gamers with the attachment that I lack. Indeed, the most common descriptor I've heard is that it's "just like an NES game." While artistically and musically this is certainly the case, the experience of playing it felt almost nothing like an NES game.

There is a lot of influence from classic NES platformers on display here to be sure. The story is about as 8-bit as can be—the Shovel Knight must defeat the evil Enchantress and her Knights of the Order of No Quarter to rescue the Shield Knight, his beloved companion. Shovel Knight features Mega Man-style level design in abundance, with simple obstacle and enemy combinations that get steadily more complex as the player progresses. The Shovel Knight's movements and abilities are reminiscent of old Castlevania games, with a melee base attack supplemented by several ranged magic powers. Even little things like the pogo jump from DuckTales make an appearance.

These classic elements are presented with all the perks of modern game design around them, such as very frequent and forgiving checkpoints, infinite lives, and controls that never once felt like they failed me. Shovel Knight is all the best things about 8-bit platformers presented in a very friendly package. Too friendly, in fact, to feel anything like an NES game.

Absent things like the random movements of the platforms in Ice Man's stage in Mega Man, or enemy shots catching me through a door in Metroid, Shovel Knight lacks any of the aggravation I associate with most NES games. Never once did I feel cheated when I failed. Never once did I become angry or frustrated, despite some fairly challenging stages. The game is just too nice to the player to have a genuine NES feel to it.

This is not a bad thing. In fact, it's a testament to how good Shovel Knight actually is that it works even when the nostalgia factor doesn't fully apply. Though it didn't tug at my heartstrings in the way that I think it was intended to, it plays so well that I didn't care.

While the modern conveniences certainly water down the difficulty factor, it's worth noting that they can all be totally ignored. Checkpoints can be destroyed to render them inoperable, and upgrades like health boosts and magic items are entirely optional. If one wants a more hardcore experience, it's there for the taking. Still, even discarding all the help the game offers doesn't create an experience as aggravating as something like the NES Contra games.

Again, this is a good thing.

Retro aesthetics are common among indie games, and while Shovel Knight definitely nails that part with beautiful 8-bit-style artwork and a great chiptune soundtrack, what's going on underneath all the pretty sprites is what makes it stand out—it's tough but fair, it's as easy or as hard as the player wants it to be, and the checkpoints make it respectful of the player's time. With fundamentals this solid, Yacht Club could have done Shovel Knight in any aesthetic style and still come up with a winner.

Shovel Knight's greatest feat is disguising itself as "old school" when it's design philosophy couldn't be any further from it. While at first glance it may seem like just another 8-bit homage, the quality and polish make it so much more. Rather than a spirited look at the past, Shovel Knight instead reminds us just how far game design has come. Rating: 9.0 out of 10


Disclosures: This game was obtained via direct purchase from the developer and reviewed on the PC. Approximately 6 hours of play was devoted to single-player modes (completed 1 time). There are no multiplayer modes.

Parents: According to the ESRB, this game contains mild fantasy violence. I saw nothing objectionable at all in my playthrough.

Deaf & Hard of Hearing: Shouldn't be a problem. There are no spoken lines and no meaningful audio cues.