Day Two was pretty heavy on appointments. I had a ton of scheduled meetings (i.e., I followed @bradgallaway around a lot) and saw some cool stuff, and some stuff I thought wasn't as cool.

First meeting of the day was with Uber Entertainment, the minds behind Monday Night Combat. I enjoyed the original game, but I thought it needed a beefier assortment of environments and classes, and it appears the sequel is addressing that. There was no playable version, but the trailer on display showcased some new environments and classes. I was impressed by what I saw, although the game's free to play model as described to me was a little confusing. I'm definitely getting the game when it comes out, but I'm not sure how well the business model will work for them.

I didn't get any hands-on time with this, but what I saw was intriguing. A zombie smasher appearing to incorporate elements of Left 4 Dead and Dead Rising, the demo I saw consisted of a few simple missions battling some undead on a beach and saving a hapless human from a burning car. I'm not totally sold on it, but it definitely didn't look like the total crapstorm I had heard about. 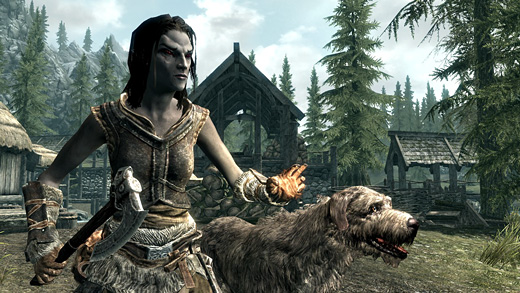 The single most anticipated thing in the whole show for me, and I was not disappointed. I made my traditional Argonial stealth-based character to play around with, although the demo characters were outfitted with a wide range of abilities for demonstration. In about an hour and a half with the game, I played around with the new combat system, including magic and stealth abilities. Everything worked smoothly, and the game looks absolutely fantastic. As an added bonus Todd Howard himself was on hand to answer questions, and I learned that he shared an affinity for the Argonians as well. I'm definitely still stoked for this.

The evening was capped off by a fun party at the downtown Seattle GameWorks, where Jeff Mautlef (@mrdurandpierre) and I engaged in a battle of wits to the death over Red Dead Redemption. I think I held my own. He may disagree.

That's all for day two. Tomorrow will be a lot more casual, as I'll be dedicated to just wandering the convention center rather than making appointments. Or I might go to the PC area and play Team Fortress 2 for four hours. We'll see.

Every second of my time is gone to dead island. I never want to quit playing it! To have no idea of what it looks like outside anymore,is actually pretty sad.

Is it true that Skyrim’s combat control are ripped off demon’s souls ?