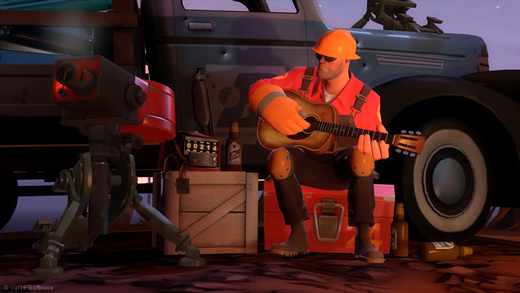 Montgomery Scott. Kaylee Frye. Lucca. All are capable of fashioning a soup can, a book of matches, and some rocks into a warp drive. From this line of quirky mechanical geniuses comes the Engineer, Team Fortress 2's resident miracle worker. Need an instant defensive weapon emplacement? Done. A machine that can heal gunshot wounds, severe head trauma, and some infectious diseases? Piece of cake. How about a matter transportation system that not only bends space and time in (previously) impossible ways, but does so without rending human flesh? Easy as pie.

The Engineer is the tireless backbone of any team. His sentry is often the last thing standing between the enemy team and victory, and his teleporters help keep the front lines stocked with reinforcements. While everyone else is busy taunting and spamming "SPY!!" on the voice commands during the setup period, he's using those precious seconds to ensure that his teammates have something to taunt about. And he does all this happily of course. Nothing gives an Engineer more pleasure than watching a well-oiled machine work to perfection.

The Engineer is my favorite class. As I've mentioned before, I gravitate towards support roles in team-based games. After playing Medic primarily in my first few games, the more deliberate nature of the Engie began to appeal to me. He can be frustrating, especially when there are too many enemy Spies or Demos about or when his team simply can't protect him long enough to get his gear built. However, the feeling of my creations wreaking havoc is the most rewarding thing for me in the whole game.

The lay of the land

The single most important thing about being an Engie is knowing the map. Knowing ideal sentry locations, where to hide teleporters, the best places to stand guard over your equipment, and the locations of the metal stashes are the most important thing to have in your little Engie notebook. The cunning Engie needs to find spots where a Sniper or a Soldier can't pick off his sentry from a safe distance or where he can stand pat without making himself vulnerable to a Spy backstab. When your team needs to make a defensive stand, knowing where the choke points are and capitalizing on them in the Engie's number one priority.

However, don't be afraid to experiment. Especially now with the Engie's ability to move his gear after it's been built, a level 3 sentry can be deployed quickly in very opportune places. I've caught many a wayward foe with a sentry in the water on 2Fort or outside the Blu spawn on Dustbowl. Will these unorthodox locations hold out for long? Probably not. However, a sentry and a teleporter where the enemy least expects it can be their worst nightmare, at least for 30 seconds or so. 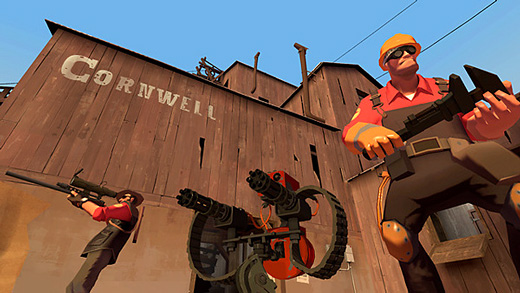 Move that gear up

The biggest thing to come out of the Engie update was the ability to move gear after it is built. This is especially big on symmetrical maps where control of a given territory will shift multiple times in rapid succession, or when you're playing strictly offense. When your team pushes forward, don't be afraid to move your stuff up behind them. A well-placed just-in-time sentry can halt the enemy's counterattack in its tracks, and keeping the teleporters as far up as practically possible should always be on the mind of the offensive Engie. If you're even more daring, you can put a sentry out in plain view and using the Wrangler to provide cover fire for your advancing teammates.

Conversely, there are times when the Engie must do the unthinkable and abandon the creations he worked so hard on. No defensive setup is invincible given the right plan of attack, and the cunning Engie must realize that there are times when he simply cannot save his gear. Hiding behind your sentry while staring down an ubered enemy Demo/Heavy/etc. at close range will almost certainly result in your demise. The only course of action in this situation is to run as fast as those stubbly little legs will carry you. With luck, you will survive and live to wrench another day. With even more luck, some of your buildings may survive the onslaught and you'll be able to set up again quickly. There is a time to fight (by which I mean a time to duck behind your sentry and hit it with a wrench) and a time to flee, and knowing what to do and when to do it is a crucial instinct for the enterprising Engie to hone.

Sentries are not social creatures

Too many Engies on the same team creates a classic "too many cooks in the kitchen" scenario.  The ideal base locations all get used up and the Engie(s) that lose this game of musical sentries are forced to set up in more vulnerable positions, thus becoming less useful. There's also less metal to go around, so it becomes that much harder to get everyone setup quickly. This is more of a problem for strictly defensive teams, as they need to make more defensive stands and thus will be prone to use more Engies. However, I'll often see an attacking team with three or more Engies as well. While Engies great for holding a forward position, the match will more than likely be a deadlock due to the lack of offense.

All that said, having multiple Engies in the same area is great for defensive purposes….if they're positioned correctly. There are far, far too many times that I see Engies setting up shop right next to each other. This is Christmas for the other team's Demos, as one uber and a few stickies can mean all your base belong to him in a matter of seconds. Setting up further apart not only makes it harder for the enemy to take out your defenses in one attack, but also protects your teammates in the area from Spy attacks. Remember, as long as there is an active sentry in range, enemy Spies can't backstab without being killed. 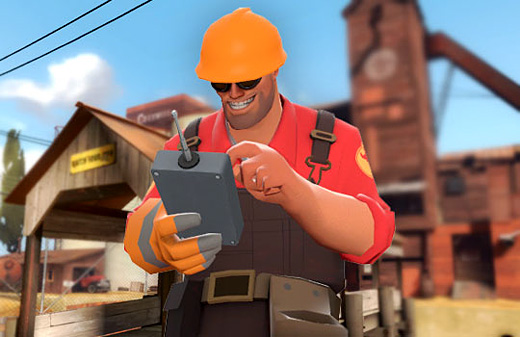 The sentry is the most powerful weapon in the game. Trying to tackle a sentry head-on is instant death for most classes. Not even the Heavy can stand up to a fully upgraded sentry for very long. However, getting a sentry upgraded to level 3 takes time and metal, and thus is often isn't ideal for the Engie who likes to run and gun. The Engie update package, which was seemingly centered on creating opportunities for these mobile Engies, gave us an excellent alternative.

The Gunslinger and it's mini-sentry is just the thing for the Engie on the go. The mini-sentry builds fast and takes a smaller amount of metal to build, making it prefect for dropping near an enemy force. While it isn't very powerful, you'd be surprised at how much damage it can do before it gets destroyed. And since it's so cheap to build, you can just set up another one before the debris from the first one has hit the ground. Strafing an enemy while the mini-sentry picks away at his his health is another effective tactic. Add in the Gunslinger's health boost and the Frontier Justice's ability to stockpile crit shots based on how many kills your sentry gets, and the Engie is suddenly and offensive force to be reckoned with.

As stated above, I really like the Gunslinger/Frontier Justice/mini-sentry combo. However, there are times when it just isn't appropriate and using it will just get you the unvarnished ire of your teammates. Using it to make a defensive stand on maps like Dustbowl is just not a good idea in most cases, since the mini-sentry just doesn't have the stopping power of it's big brother. I find that the offensive Engie combo is best used on symmetrical control point maps or on king of the hill, as they both lend themselves well to an Engie who can set up and rebuild quickly.

Spies are hard to deal with. You can do everything right, take every precaution, and look in every corner, but there are times where a spy will get the better of you. It will happen, especially if they have the Cloak & Dagger and can just wait for the right opportunity. You can, however, take precautions to ensure that the Spy has to work to get to his goal. For one, try to build your gear so that you can have your back to the wall while standing guard. The Spy obviously can't go through the wall to get you, and if you position yourself correctly you can make it hard for him to get you with the Ambassador as well. Also, try to build within the vicinity of another Engie if it's practical to do so. This makes sure that the Spy can't do anything but sap, and even if he does that your teammates can deal with him.

Now I know you're asking "Richard, what on earth do I do if the Spy saps my stuff and I'm alone? What then? WHAT THEN???" First, calm yourself. Second, remember to do one thing before all else:

Seriously. This took me a long time to get used to as well, as the sound of my precious buildings screaming for help made me rush to them with my wrench ready, muttering to them that everything would be OK. However, this is a surefire way to get yourself stabbed or shot, in addition to losing all your hard work. When a Spy saps your buildings and you are alone, you must kill the Spy before trying to save your stuff. Always and forever. Even if the Spy opts not to kill you when you stop moving to repair your buildings, he can keep sapping them until they're gone, since he can put new sappers on them faster than you can repair them. If you manage to kill the Spy, you've still got a chance to knock the sappers off before your stuff goes bye-bye. Ultimately Spies will take you down every now and then. It is inevitable, since they will always have the element of surprise. But by being alert and sufficiently paranoid about Spies you can give yourself a fighting chance.

As I said, the Engineer is my favorite class. I love the feeling of being indispensable, and the Engie gives me just that. He's dependent on his team to a large degree, which can make him frustrating for more offense-oriented players. But behind every successful team there is an Engie (at least one anyway) who is constantly working behind the scenes to make sure things run smoothly, an unsung hero if there ever was one.