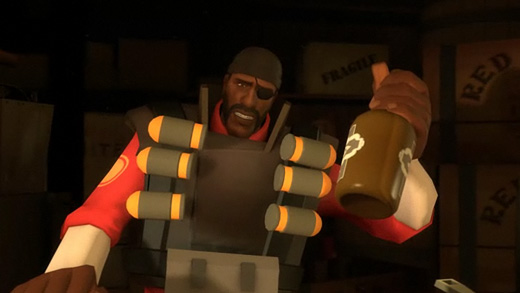 I'm not very good with the Demoman. In the hands of a skilled player he can be the most powerful force in the game, but he and I just never meshed that well. So this article should be taken with a grain of salt, as I am by no means a Demo expert. That said, I do pick up the bagpipes from time to time. Indeed, until a fairly recent update the Demo was the one class that could be legitimately called overpowered. How is that, you ask? Well, take a swig of the ol' grumpy bottle and have a listen.

The Demo lives off two weapons-the basic grenade launcher and the sticky bomb launcher. The only Demo unlockable I ever use is the Scottish Resistance (which I'll detail later on), and other than that I stick with the plan old classic Demo. I do not like the Chargin' Targe, as a Demo without his stickies is half a Demo. It's rushing ability is fun for messing around, but outside that it doesn't really have any practical uses. The same goes for the Demo's alternate melee weapons, as the penalties for using them just aren't worth it.

Demos are excellent spammers. Demos should be spamming grenades at all times—offense, defense, in the bathroom, at your cousin's wedding, anytime. In short, if there exists a window there is no reason for a Demo not to shoot grenades into it. The sight of a few grenades is usually enough to hold back an enemy force for a second or two, and in closed spaces three or four grenades can be a death sentence. Crit grenades are almost as powerful as crit Soldier rockets, which makes Demos another good Kritzkreig choice.

The sticky bombs make Demos the best class in the game for taking down Engineer nests. Three stickies is usually enough to take down any building plus the Engie if he's foolish enough to stick around. For this reason Demos are a great choice for the Medic's normal über when faced with a wall of sentries. Even without the über, a crafty Demo can often find the right angle to take down sentries without putting himself in much danger. As an Engineer, there is no worse situation than when stickies start dropping in seemingly from out of nowhere. Demos can also use stickies to propel themselves similar to the Soldier's rocket jump, although it's much more difficult and it's a lot easier to blow yourself up doing it. 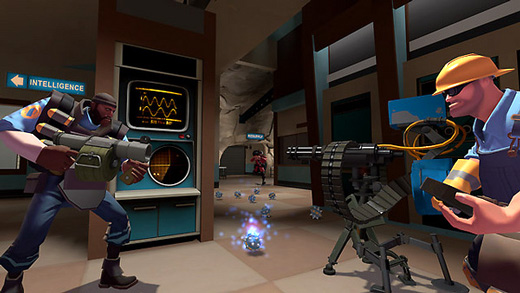 That's what'cha get fer touchin' that!!

Demos aren't as effective at area denial as they used to be, as sticky bombs can now be destroyed with bullets. This however is a good thing. Sticky bombs were one of the few truly unbalanced things in the game. Coming across a sticky trap without an airblasting Pyro, a Soldier, or another Demo meant that you were pretty much out of luck. However, crafty Demos can still get the better of the enemy with sticky traps.

It's best to try and conceal stickies as well as possible, placing them on things like walls, door frames, or low ceilings. Otherwise enemies will destroy or avoid them. Stickying the cart is a good idea no matter where you put them, since at the very least enemies will have to slow down and deal with them. While putting stickies on a capture point might seem like a good idea, they're hard to hide and will usually get either moved or destroyed by attackers before you get a chance to set them off. The Scottish Resistance really comes in handy when laying traps. The increased number of stickies you can have out and the ability to selectively detonate them can be extremely useful when trying to defend multiple entry points.

The Demoman is unique in that he has no direct fire weapon. Because of this he's exceptionally vulnerable to close range fighters like the Pyro. He's also slightly slower than normal (but still faster than the Soldier and the Heavy), so getting away from in-your-face attackers is a problem. His slowness also makes him a prime Spy target, and even if he can catch a Spy he often doesn't have the close-range chops to take him down. Snipers also have pretty easy pickings with the Demo.

Like I said, I'm no Demoman. I use him for conservative spamming on defense and when my team needs to take down a sentry on offense. Any other time I leave the Demoing to more skilled Demoers. Those skilled Demoers can be beastly though. If the internet has taught me anything, it's that a true sticky master can do just about anything, just like in real life. As long as he cleans up afterwards.

Oh come on, you knew there had to be a semen joke in there somewhere.