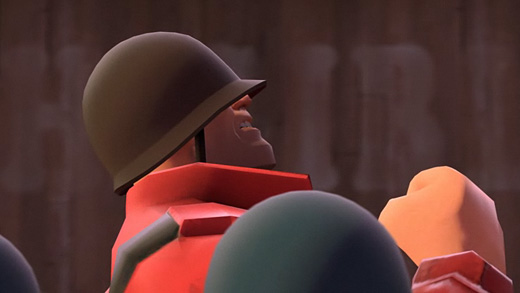 He's mean, he's got a jawline cut by the Maker herself, and he does the best Captain America on crack impression ever seen without even trying. He's the Soldier, arguably the most well-rounded offensive and defensive class in the game. He has few real weaknesses, but no overwhelming strengths. I didn't used to play him that much, but I've started using him a lot more lately in a defensive role. However, he can work on almost any map or any game mode.

The Soldier lives and dies off his rockets, often quite literally. The standard rocket launcher is one of the most versatile weapons in the game, effective at both medium and long range. Soldiers can whittle down clustered groups of enemies with a few well-placed rockets, and he can pick off a barely-exposed sentry gun from far away if need be.

Like anything else in Team Fortress 2, the rocket launcher isn't without drawbacks. The rockets aren't as effective up close since the Soldier will take damage from the explosion and close targets are easy to miss. It also runs out of ammo very quickly, increasing the Soldier's reliance on the shotgun if he has it. Rockets can be tricky to aim, especially while moving. However, Soldiers that have perfected their rocket marksmanship are a force to be reckoned with.

On that note, the unlockable Direct Hit is downright lethal in the hands of a Soldier who can aim rockets, although personally I stick with the normal one. I usually find myself playing a pretty conservative Soldier, rocket spamming the enemy while occasionally going forward and doing some more personal damage.

If I'm on straight defense I go with the Buff Banner over the shotgun, as I can usually stay alive long enough to get it charged by staying back and popping rockets off. The mini-crit boost it gives to everyone around you can be huge, especially if you happen to be around some Heavies or Demos. On offense (or symmetrical maps) I stick with the shotgun though, since I'm usually dying a lot more than when strictly playing a defensive role. Also, don't be afraid to switch to the shotgun if you run out of rockets-it's more than enough to finish off an wounded enemy, even if it isn't as explodey. 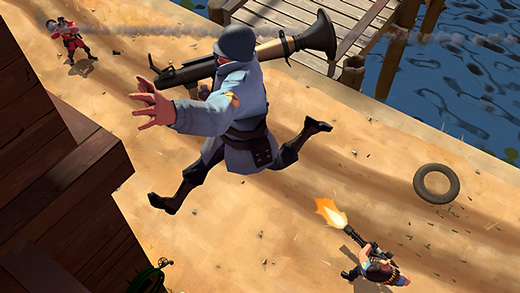 Rocket jumping is the soldier's most unique ability. By shooting a rocket at your feet and jumping simultaneously you can reach higher places that most other classes in the game. This can give a Soldier a great vantage point to rain down rocket barrages of pain before the enemy even sees him. While it does involve sacrificing some health, it's often well worth it, especially if there's a Medic around.

One of my favorite things to do is run at enemies, rocket jump, then fire off my other three rockets down on them before they can react. At best you'll get some surprise damage/kills, and at worst you'll distract said enemies from any of your teammates that might be with you. No matter what you might try to do with it, taking some time to master rocket jumping is well worth the effort.

Rockets are pretty powerful by themselves, but a critical rocket might as well be a nuclear warhead. For that reason, a Soldier being übered by the Medic's Kritzkrieg is the most powerful offensive force in the game. A Kritzed Heavy is probably better at suppressing fire, but the sheer amount of damage from a crit rocket puts the Soldier over the top in this regard. Odds are you'll have about five or six shots before the über runs out, and in the hands of a skilled Soldier that can be enough to wipe out huge numbers of enemies of they're close together.

Soldiers are slow-only the Heavy is slower. This makes them prime targets for Snipers and Spies. Soldiers also have a tendency to stand still while lobbing long-range rockets, making them even more tasty for Spies. As I mentioned earlier, Soldiers are not very strong in close range match-ups. Rockets run out pretty quick, and the Soldier doesn't have the speed to get away if he needs to retreat. Pyros and Heavies will usually get the better of a Soldier in a face-to-face conflicts. The best bet is to keep your distance just enough to put your enemy into medium range, then deliver some rockets to the their feet.

Using the Medic's normal über on a Soldier is not a good idea. The rocket launcher's low ammo clip size limits their ability to punch through enemy defenses, as they just can't keep up a constant stream of damage like a Heavy or a Demo can. Their lack of speed also prevents them from moving up as well as Pyros and Demos.

Soldiers have a little bit of everything for all situations. Because of this there isn't really any concrete role they should play outside of "big man that destroys things". The Soldier has been steadily creeping up my hours played list even though he's still close to the bottom. The addition of the Buff Banner has made him a lot more appealing, but I still tend to fall into to more of a support role than anything else.

Thanks! I have guides written for the other classes up through the Engineer. I was intending to finish the final three (Medic, Sniper, and Spy) as well, but I just never got around to it. Might still do that eventually….

There are quite a few guides out there with duplicated info – but this Is a bit different.

Any chance of completing the other classes?