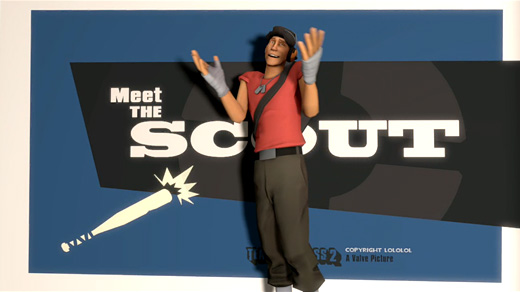 The Scout is probably the hardest class for me to write about, simply because I've spent relatively little time playing him. His advantages are obvious, but they often aren't of any great use. Scouts make their living by being fast and hard to hit, which is useful in some areas and worthless in others. Still, you'd be surprised how many times a clever Scout can get the jump on a Heavy or a Pyro and take them down. However, in some situations speed and finesse simply won't do, and at that point the Scout's utility vanishes.

As I mentioned previously, the Scout is my least played class. This is in large part due to the fact that in the early days of Team Fortress 2 Scouts were largely useless on non-CTF maps, as sentry guns were instant death to any Scout with bright ideas. The Scout's updates have done a lot to alleviate this, especially the Bonk Energy Drink. However, even now their utility on maps like Dustbowl is somewhat limited and I still find myself staying away from him more often than not.

With all the people skills of a Jersey Shore cast member, his schtick is usually good for a chuckle, even if he's not quite the Internet legend that the Heavy or the Pyro is. I think personality is an area where Team Fortress 2 rises above all its competitors (one of many) and the care given to writing the personas and making them entertaining is the biggest reason why.

The Scout's greatest assets are speed and agility. He can outrun anything in the game, and thus is a natural flag-runner on CTF maps. As I said, the energy drink is a great help in solving the sentry problem, as now Scouts can slip past enemy defenses, grab the briefcase, and get out another way before he can be caught. Or if the briefcase has been brought halfway out and then dropped, a Scout can just run up and grab it to finish the journey.

Scouts are also very good for payload maps, which has helped make them a lot more playable since the early days. Often they can push the cart for quite some time before getting knocked off, and their double-count for capturing makes them ideal for sneaking in and pushing the cart a few precious feet.

In that same vein, a Scout willing to sacrifice himself over and over again can also single-handedly turn the tide of a payload match, through a strategy I call "crashing the cart". As I said, the Bonk's short invincibility period can allow the Scout to run past enemy sentries or other defenses. This allows you to touch the cart and move it forward inch by inch, even if a life has to be given for every inch. At the very least, the cart won't move back, since touching it even while an enemy is standing there will stop the movement timer. You will die a lot with this strategy, and your kill/death ratio will likely be horrendous. Still, this can be an integral part of victory if you're willing to shed the blood for it.

Scouts are also surprisingly effective anti-Spy agents, although not nearly on the level of the Pyro. Spies can't outrun you or outgun you, and Scouts are very difficult to backstab. Once a Spy gets set on fire or otherwise caught, it's in your best interest to help chase him down, since often you'll be the only one that can catch him. Easy kill. Defensive Scouts (the few that there are) should make Spy checking a priority. 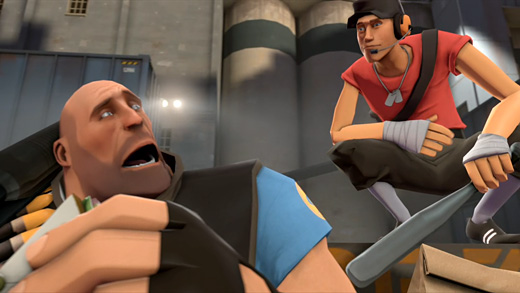 In that same vein (that's right, I'm on a segue roll) Scouts make very good one-on-one combatants. Outgunned and outhealthed, a good Scout can still make use of his agility and outmaneuver an overconfident Heavy. In fact dragging any of the more powerful classes into a dogfight is a pretty good strategy, as you stand no chance in a straight firefight. This can be very useful on Arena or King of the Hill maps.

The Scout's utility on standard capture point maps is unfortunately still limited. Even if you can get past the enemy defenses, odds are you won't be able to hold your ground long enough to capture the point by yourself, even with the double capture. A Scout can be useful as part of a coordinated assault with a few Medic übers, but by yourself you're little more than target practice. This is the main reason why Scouts were so few back in the pre-payload days.

There is a strategy known as "Scout Rushing" which involves four or five scouts on the offensive team trying to jump on the point and cap it before the other team can set up a defense, but I rarely see it work. To be honest, it isn't even really worth trying most of the time. If the enemy has even one sentry up you're likely screwed, and even at that all it takes is a few rockets or grenades to drop a few Scouts on the way to the point.

Following that, Scouts just don't have the health to stand up to most frontline combat duties. Getting set on fire by a Pyro is often a death sentence, and against a group of stronger enemies you aren't going to last that long. What I said earlier about outrunning/outjumping the enemy notwithstanding, the Heavy's mini gun or a couple of Demo stickies will end your fun very quickly.

Who the Scout is for

The Scout if for people that like to be Spider-Man in a world full of the Justice League, minus The Flash. While they're engaging in their grand battles, you're zipping along rooftops to the objective, and getting back out before anyone even knows what happened. If quickness and agility is your thing, then you'll find a lot to like in the Scout.

Scouts are good at shock maneuvers trying to catch the enemy off guard, but against a fully entrenched defense you'll often be like the new intern at the office, trying to find ways to be useful while everyone else does the real jobs. Personally I don't play the Scout unless it's Arena/King of the Hill or I'm crashing the cart. Valve's efforts to make him more useful have been largely successful and he works with the game's balance, which is why I even bother with him at all now. However, he's still not getting to the top of my hours played list anytime soon.