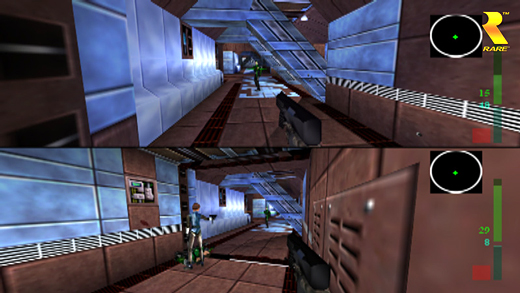 I've always felt that Perfect Dark was superior to the original Nintendo 64 GoldenEye 007 in just about every way. However, a recent poll from this site concluded that most of our readers favor the James Bond-inspired shooter over its spiritual successor. I fully acknowledge that GoldenEye was a landmark title in several ways, mainly in breaking the Doom mold of "just kill everything on the map" and beginning the trend of more tactical shooters we see today, such as Half-Life 2. However, Perfect Dark built on those early achievements in such a fashion as to eclipse its ancestor in more ways than one.

First off, Perfect Dark is just a better looking game, and not just in terms of graphical quality, although it did push the N64's hardware to the max. It featured settings ranging from a downtown skyscraper to a tropical resort to Air Force One to an alien spaceship, compared to the dull (by comparison) levels of GoldenEye, which consisted of mostly urban/industrial settings. Perfect Dark was also a little bit more challenging overall (the Carrington Institute stage being the crown jewel in that regard) making for a more rewarding experience. While the story might have been a little silly, it's coherent enough to be acceptable in what isn't a story-driven game, and the addition of voiceovers and a more fast-paced soundtrack made things a little more immersive. The introduction of the co-op and counter-op modes, the latter of which can be thought of as an early predecessor of Left 4 Dead's versus mode, made things all the more sweet.

There's a lot more variety in weapon design too. Going beyond the standard 90s style guns of GoldenEye, the sci-fi theme in Perfect Dark led to a lot more creative freedom, resulting in several deadly gems. Perfect Dark gave us devilish little contraptions like the Laptop Gun, the Dragon, the RCP-120, and the Slayer. The addition of secondary fire added some great new dynamics to the weapons, such as the Dragon's proxy bomb function, the Laptop Gun's sentry placement, and the RCP-120's cloaking device. And of course, what Perfect Dark discussion would be complete without talking about the Farsight, the über-cheap sniper rifle that Halo players have dreams (or perhaps nightmares) about?

Perfect Dark also featured a number of technical improvements. Several flaws with enemy AI and abilities were addressed, namely guards now being able to see over railings and their use of melee attacks in close quarters. Motion blur was also put to good use, distorting the screen if the player was hit by a melee attack or a tranquilizer shot. A lot of replay value was added through the combat simulator, consisting of thirty multiplayer-style matches against bots with custom rules. These are great if you want to either practice your multiplayer skills or are just up for a challenge-I spent many a evening trying to finish enough challenges so I could unlock that damn Pelagic II guard.

So in a nutshell, Perfect Dark built on everything that had been accomplished in GoldenEye, and the result was a superior product. Perfect Dark can be thought of as GoldenEye's real sequel, rather than any of the titles released since then under the GoldenEye name. Now, without further delay, feel free to tell me how wrong I am.

I think that the step from GoldenEye to Perfect Dark had a lot in common with the step from Halo: Combat Evolved to Halo 2 several years later: a massive improvement in the range of multiplayer options; but numerous ambitious changes to the single-player mode that were impressive at first but which, in retrospect, ended up taking at least as many steps backwards as they did forwards: Halo 2’s Legendary difficulty is far less fair and well-balanced than Halo’s (still the pinnacle of single-player FPS combat IMO); likewise, I find Perfect Dark’s Perfect Agent setting a hell of a lot… Read more »

Objectively PD would be the winner, but Goldeneye delivered the bond feeling- nothing afterwards could to this unique thing in similar good way for me-, the difficulty levels were not to high, i finished everything, compared to PD were i got stuck in the middle one. But most of all i had the feeling rareware cried for a cd-drive, they wanted to do cinematic presentation, but couldn’t because of the cartridge limits. I constantly felt like they could not do what they wanted to achieve. It felt crippled for me… And this whole alien are51 thing… really don’t know, similar… Read more »

Summed it up perfectly. Goldeneye was certainly more groundbreaking, but Perfect Dark kicked it up even farther.

(I’m going to assume right here that the majority of people who played Perfect Dark had already played Goldeneye. This might not be true, and if it’s not then I’m wrong in my conclusions.) Perfect Dark was better than Goldeneye. Giving it benefit of the doubt, assuming you can boil down a subjective experience into a quantity, it was around 50% better. Goldeneye was about a million percent better than any console FPS that preceeded it. Given that, we can assume that people rate Goldeneye high because it solved so many of the existing issues. It was a revolution, not… Read more »

I couldn’t agree more. The depth of options and diversity in PD totally overshadowed Goldeney, fun game that it was. Where Goldeneye only had multiple mission objectives, PD introduced simulants, simulant “personalities,” the aforementioned challenges, secret weapons, walking around the Carrington Institute between levels, and so on. By the time I and my friends were done with this game, I think we’d logged several weeks worth of hours, according to the computer. Now that’s bang for your buck.