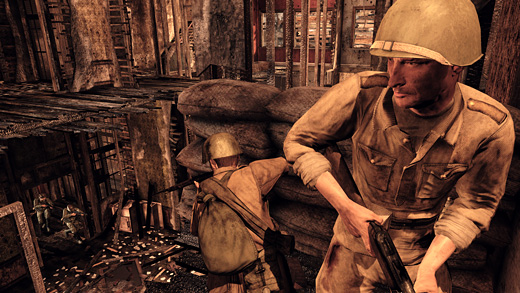 HIGH: The frantic struggle after walking smack into an enemy player in a small enclosed area.

LOW: Locking most of the tutorial missions based on completion of the single player campaign.

WTF: Killing myself and a teammate with a bomb that I thought was an ammo box.

There is a very tricky balance between giving the player too little help during a game and giving him too much. Too little assistance, and the player might become confused and frustrated. Too much, and the game risks being overbearing. The trend in most modern first-person shooters (FPSs) is towards the latter scenario, using an overwhelming series of heads-up display (HUD) elements, checkpoint markers, and the like to keep players on-course. However, Red Orchestra 2: Heroes of Stalingrad tacks to the other side of the spectrum, forcing the player to be aware of his surroundings through the use of (gasp!) sight and sound. When done with care, this minimalistic attitude can be a beautiful thing, and Red Orchestra 2 mostly pulls it off. Mostly.

A World War II themed, multiplayer-focused FPS from Tripwire Interactive, Red Orchestra 2 takes a very different approach to multiplayer than titles such as Modern Warfare or Battlefield. Instead of a wealth of of visual aids, the player only has his eyes, his ears, and a sparse HUD display to guide him. He has to become aware of his surroundings in order to survive. Paying attention to the sound of gunshots, screams, and other battlefield noise is crucial. Taking time to assess targets is essential as well, since it's easy to mistake a teammate for an enemy. While it would be easy to write off all these elements as flaws, they combine to make Red Orchestra 2 an extraordinarily intricate experience.

Combat in Red Orchestra 2 is quite visceral. There are no medics, no health kits, no life bars, and getting shot even once usually results in death. A wound in a non-lethal area (arm, leg) can be bandaged, but that is the extent to which the player can heal. This lends itself to a vaguely survival horror-like experience, knowing that certain death is potentially around every corner. This sense of isolation, while difficult to get used to, is what sets the game apart from its contemporaries. 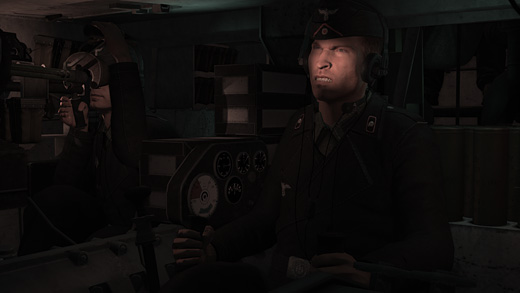 I ask you to consider this scenario: I am playing as a German attacking a capture point in a territories match. Sprinting from cover point to cover point, I systemically check for any possible defenders. Reaching the capture point, I hear a noise to my right. I head into the nearby doorway and come face-to-face with an angry Russian with machine gun. We start firing at each other frantically, eventually running out of ammo. I'm hit, but I apply a bandage before he can finish me off. I hang back with my pistol drawn to see if he will be foolish enough to charge me through the doorway. He is not. I chuck a grenade in the doorway, to see if I can get him to run away. I take cover, peek out to the side, and he is nowhere to be found. Realizing what might be happening, I turn around and discover him running in behind me, also with his pistol out. We both fire once. I hit him square in the chest and he drops.

That one encounter was worth shooting down a thousand helicopters in a big-budget blockbuster war game. Having all the bells and whistles of Battlefield: Bad Company 2, or the recovery system of Halo would have ruined it.

As if the player wasn't already asked to acclimate enough, the learning curve for this game can be downright brutal. Very few concessions are made to players who may not be familiar with the genre. According to Red Orchestra 2, the best way to learn is to jump right in and start getting killed. This is both an asset and the game's biggest problem. The struggle to learn the game's rules was almost refreshing in a way, in that the moment where everything clicks was so satisfying it made all the hardship worth it.

However, information about specific weapons and classes, plus a much-needed tank tutorial were nowhere to be found. Eventually I figured out that there were a series of tutorial missions that I had to unlock by completing parts of the single player campaign. I don't like the campaign (it's essentially a series of multiplayer matches with bots with dreadful AI) so the idea of hiding a lot of very important information behind the worst part of the game is incredibly disappointing. I'm all for keeping in-game info to a minimum, but there is no reason I shouldn't be able to view instructions on what the weapons are and how to use them.

A game like Red Orchestra 2 is a rare find in this era, even considering that World War II has been done to death as a game setting. An uncompromising title that does not have any qualms about throwing players to the sharks and saying "deal with it", it's a deeply satisfying multiplayer experience if one can suffer enough to allow it to be. Rating: 8.5 out of 10.


Disclosures: This game was obtained via publisher and reviewed on the PC. Approximately 1 hour of play was devoted to single-player modes and 6 hours of play in multiplayer modes.

Parents: According to the ESRB, this game contains blood and gore, strong language, and violence. If the violence wasn't enough, you still have to contend with the asshattery of the internet public at large. Keep the young ones away.

Deaf & Hard of Hearing: Unfortunately, this game will be practically unplayable for deaf players. As I said above sound is a big part of being aware of your surroundings, and you'll be at a major disadvantage without it.