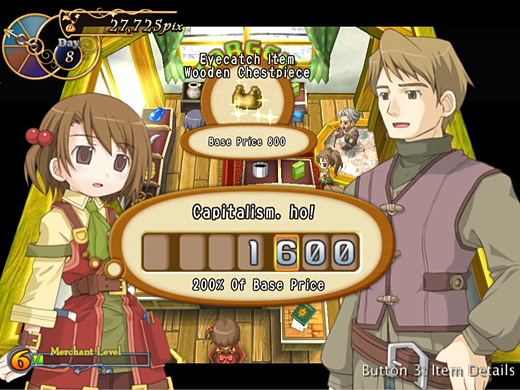 HIGH: The SHIIIINNGGGG noise that happens whenever negotiations begin.

LOW: The frustrating rush to make the week three payment.

WTF: Getting fish thrown at me in the dungeons.

Item shops: The unsung heroes of any role-playing game (RPG).

Without these shops, our heroes would charge off on quests with nothing but the Peasant's Clothing they started the game with and a -1 Table Knife.

Without a doubt, Shopkeepers are vitally necessary, toiling away, endlessly chained to the counter while the hero runs off to save the world—but these people have lives too, do they not? They have hopes, fears, desires, and even trials of their own to face. Sure, the bottom falling out of the ether market isn't as exciting as Aeris dying, but it's no less heartbreaking for the person having to face it. If you cut an item shop owner, do they not bleed red potion at an outlandish price?

Recettear: An Item Shop's Tale, a new twist on an old RPG staple from Japanese indie developer EasyGameStation, seeks to shine a light on one of these lives.

Reccette is an insufferably cheerful young girl whose father has left her with a mountain of debt. With the help of the bank's representative, a fairy named Tear, Reccete opens the aptly named item shop in order to raise the money to pay off the debt. Now, I can hear you asking yourself, "A game based on just selling items? How complex can that possibly be?"

The answer: pretty damn complex, and it isn't about just selling items.

Recettear is incredibly deep. Sure, the game starts things off fairly simple, explaining the basics of buying items at low prices from wholesalers and selling them in the store with a markup. Then comes the magical art of haggling with customers, whereupon I was tasked with seeing just how much I could get a 6-year-old girl to pay for a rusty dagger, or trying to sell a housewife a suit of armor. Once haggling becomes second nature, things like supply hikes/shortages, advance orders, and special requests come into play. After that, I got to dandy up my shop with new wallpapers, flooring, and carpets to try and attract new business. All of these things helped make it feel like I was actually running a store and not just sitting at a counter in retail hell. Negotiating the price of an item and finally making the sale is extremely gratifying, and making a big sale of an expensive item that I have to get off the shelf is a unique thrill among my gaming experiences.

Believe it or not, there is a bit of story to Recettear as well, with Reccete and Tear's interactions being surprisingly entertaining. Watching Reccete's endless cheer bounce off the business-minded Tear never got old, and the pair actually grow quite a lot over the course of the story. Their interactions with the adventurers and the townsfolk are pretty light (but enjoyable) and sometimes, even very amusing. Reccetar's writing fits the game's atmosphere like a glove and is a small but noticeable asset in the overall experience. 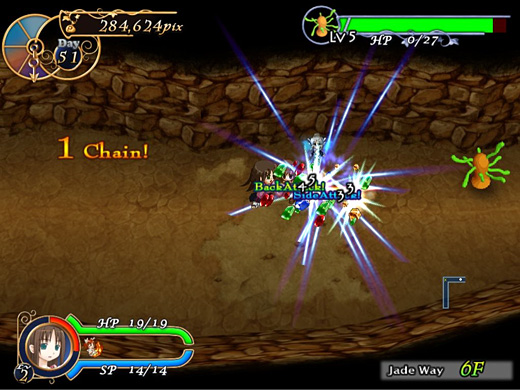 "Isn't there dungeon crawling in this game?" That's probably what you're thinking right now. If it isn't then….well, I guess you aren't one of the cool kids. In any case, the answer is yes, there is dungeon crawling involved in finding a lot of the items to sell. Standard, run-of-the mill, been-around-since-the-90s dungeon crawling. While it was a definite shock the first time I was asked to take up a blade in the name of capitalism, the dungeons actually serve as a nice break from running the shop.

The dungeons are unremarkable by themselves, consisting of a series of randomly generated maps filled with enemies and various kinds of treasure. Some of the enemies, especially bosses, can be pretty tough customers (pun totally intended), and the game does not shy away from forcing the player to replay areas after dying at the boss. While this scenario is often derided as outdated in the day and age, I actually found it to be an asset. Time is not infinite in Recettear, and going through a dungeon eats up a lot of it. Making a commitment to an item hunt means that the player must adequately prepare for what he will find in there, or else risk losing both the time and the item haul. This dungeon crawling has its own risk/reward system separate from the store and serves as a good balance to the store sim, adding another layer to the game's depth.

Unfortunately, Recettear's dungeoning contains one of the cardinal sins of RPG gaming: not having shared leveling between different adventurers. As I said, making a dungeon run takes up time, and going back to grind with the different characters really isn't an option. Shared leveling between party members is not a new concept, and it's inexcusable to leave it out of a game like this, especially when time is such a concern. And as it happens, overall time management is another area where Recettear falters.

To pay off her father's debt, Reccete must make payments of increasing amounts each week. Since the fairy bank apparently gives out the most god-awful interest rates this side of Dragon Quest Financial, the weekly deadline can be extremely hard to meet. The mad dash leading up to the due date means I don't have time to take in the enjoyable parts of the game, instead desperately trying to pawn off merchandise so I can make the payment.

I'm partially wondering if this was intentional in an attempt to create the stress involved in running a store and trying to make ends meet, but regardless, this should have been a lot less frustrating. Mercifully, I was allowed to keep my items and my experience points upon restarting, and it was wise to make every early-game tutorial and cut-scene skippable. However, making me go through all that again is no way to account for balancing problems and does not make up for such poor pacing.

I came into Recettear expecting a simple sim game with some spoofy self-aware humor, but it's so much more than that. The sheer amount of depth is staggering, and the game is extremely good at throwing the player something new every now and then to keep things feeling fresh. Were it not for some perplexing design and pacing decisions I'd be putting this on my all-time favorites shelf, but I guess being, really, really good will have to do. Rating: 8.5 out of 10.

Disclosures: This game was obtained via Steam and reviewed on the PC. Approximately 13 hours of play was spent playing and the game was not completed at the time of writing. I am however still playing.

Parents: At the time of this writing this game has not been rated by the ESRB. There are a few alcohol and sexual references to be found, but nothing I'd be too afraid to let a child see. This is actually a good game for kids, since it explains the basics of a how a store works and the concept of buying/selling in a pretty thorough fashion. Just make sure your kids don't start trying to haggle the price of milk at the grocery store.

Deaf & Hard of Hearing: You should be fine. Nothing is truly audio dependent, and the voice-overs are in Japanese anyway. Every meaningful spoken line is printed on the screen.