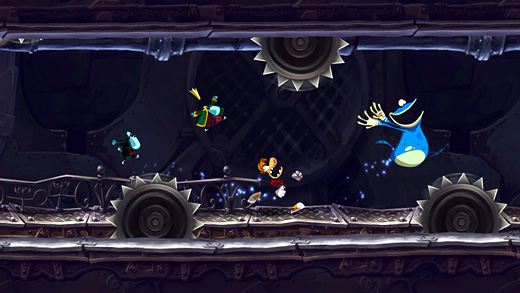 "Nostalgia trip" is a term often used to describe the revival of something that tugs at the heartstrings of those who fell in love with it as kids. It implies that without the fuzzy feelings of the past, the property in question would not be all that noteworthy. As applied to video games, it's often a nice way of saying "if you weren't into the old titles, don't bother."

in many places on the internet, and while nostalgia is certainly a factor in its critical success, calling it a nostalgia trip and leaving it at that does not do the game the justice it deserves. As someone who has no previous connection to Rayman, I can say that it's a fantastic game in its own right.

A classic 2D platformer in every sense, Rayman Origins certainly has the feel of something that was made in the late 90s or early 2000s. Were it not for the current-gen production values, it would be a dead ringer for a 16-bit era title, but Rayman Origins manages to showcase the best parts of a bygone time while not ignoring advancements made since then.

Gone is the woefully outdated limited lives system that the Mario series has been chained to. Death is greeted not by an overlong animation or cut-scene, but by a quick and simple return to the last checkpoint. Rayman and his companions control like a dream, and the levels are simple yet wonderfully intricate at the same time. The platforming requires timing, patience, and skill, resulting in the kind of supremely satisfying experience that I normally associate with the Super Nintendo Entertainment System (SNES) days.

There is a very fine line between legitimate challenge and outright frustration, and few games can walk that line successfully. Doing so requires a very polished experience, as nearly every aspect must be in prime shape for me to think "I'm just not doing this right" rather than "this game doesn't work the way it should." Rayman Origins is definitely the good kind of difficult, and I wouldn't have it any other way.

The levels start off very easy, then get steadily harder to the point of being outright brutal in the final stages. This may sound like a very simple scheme of progression to implement, but a good difficulty curve is something that very, very few games pull off. Rayman Origins does so with a colorful flourish. Indeed, a portion of the last level is one of the most challenging and rewarding bits of gaming that I have ever played, and I loved every second of it.

What helps make the game's challenge feel so fair is that I was never forced all the way back to the beginning of a level as some kind of archaic punishment for failure. Michel Ancel & Ubisoft appear to have taken a page from their 2008 Prince of Persia reboot, as the smooth transition between failures and respawning is implemented flawlessly.  In addition to the quick respawns, the checkpoints are extremely forgiving and laid out in a way that requires minimal repetition of any segments one has already completed.

Speaking again of colorful flourishes, Rayman Origins is pretty. Very pretty. Every section is delightful eye candy, backed up by a great soundtrack and entertaining animations. In fact, it's almost too pretty in places, as I would often lose track of Rayman among the vibrant visuals in the levels that zoom out or force me to use a micro-sized Rayman. These occurrences were the only time that I felt cheated by the game, but the aggravation caused was minimal.

I had never played a Rayman game before Origins, and I came away quite impressed. Calling it a throwback may be fairly accurate in a lot of ways, but it's so much more than that. Gorgeous, polished, and legitimately challenging, it is as good a 2D platformer as one will find, nostalgic or no. Very few games manage to be old-school and new-school at the same time, but Rayman Origins

threads that needle to near-perfection. Rating: 9.0 out of 10.


Disclosures: This game was obtained via retail store and reviewed on the PS3. Approximately 8 hours of play was devoted to single-player modes (completed 1 time) and no time in multiplayer modes (didn't know anyone with the PS3 version).

Parents: According to the ESRB, this game contains comic mischief, mild cartoon violence, and suggestive themes. Absolutely no worries here folks. Everything I saw was kid-friendly, and according to the gamer parents I know that have the game (read: Tim Spaeth) it's a great game for the young ones.

Deaf & Hard of Hearing: All relevant lines are in text (and the voices aren't in English anyway), so no problems on that front. However, the player is alerted to the presence of secret rooms within levels by audio cues, so deaf players might have some trouble finding them.

[quote=Richard Naik]The weakest mechanic was the shrunk Rayman. It added nothing of note, and it made it harder to see myself on the screen.[/quote] The shrunk Rayman is a callback to the very first game, where it was used much more frequently and meaningfully. I’ll admit to being a tad disappointed at how Rayman Origins handled those sections, because they did indeed not add much at all, which stands in stark contrast with the original game. In fact, you should probably try the original as well, Richard. The graphics still look very nice to this date, although the controls are… Read more »

It’s funny you say that, since the water levels were actually my favorite out of the first four worlds in terms of mechanics. The swimming is fluid (heh) and easy, and very reminiscent of Aquaria. The weakest mechanic was the shrunk Rayman. It added nothing of note, and it made it harder to see myself on the screen.

[quote=Sparky Clarkson]This brings me to my other point, which is that the score is fantastic.[/quote]

I completely agree. The game crafted a soundtrack that incorporated mariachi, jazz, and lums singing scat. One of the best parts was in Gourmet land, when the James Bond inspired track started playing. That’s when the game’s aesthetics went to another level of playability.

I have only two points to add here. The first is that if there is a criticism to be made, it’s that the game takes a bit too long to bring all its mechanics to bear. The first tour through the worlds feels a bit bloated, and the player’s palette of tools builds up too slowly. I felt this keenly in the ocean levels, which have the least interesting mechanics, even if they have the best music. This brings me to my other point, which is that the score is fantastic.